Weekly Building looks at the city through the eyes of an architect. Well-known architects reveal the object of their admiration and tell us about the buildings that have impressed them. Helsinki City Theatre, the sculptural building designed by Timo Penttilä is one of the jewels of its era. At times its renovation resembled detective work, says Pauno Narjus of LPR Architects. 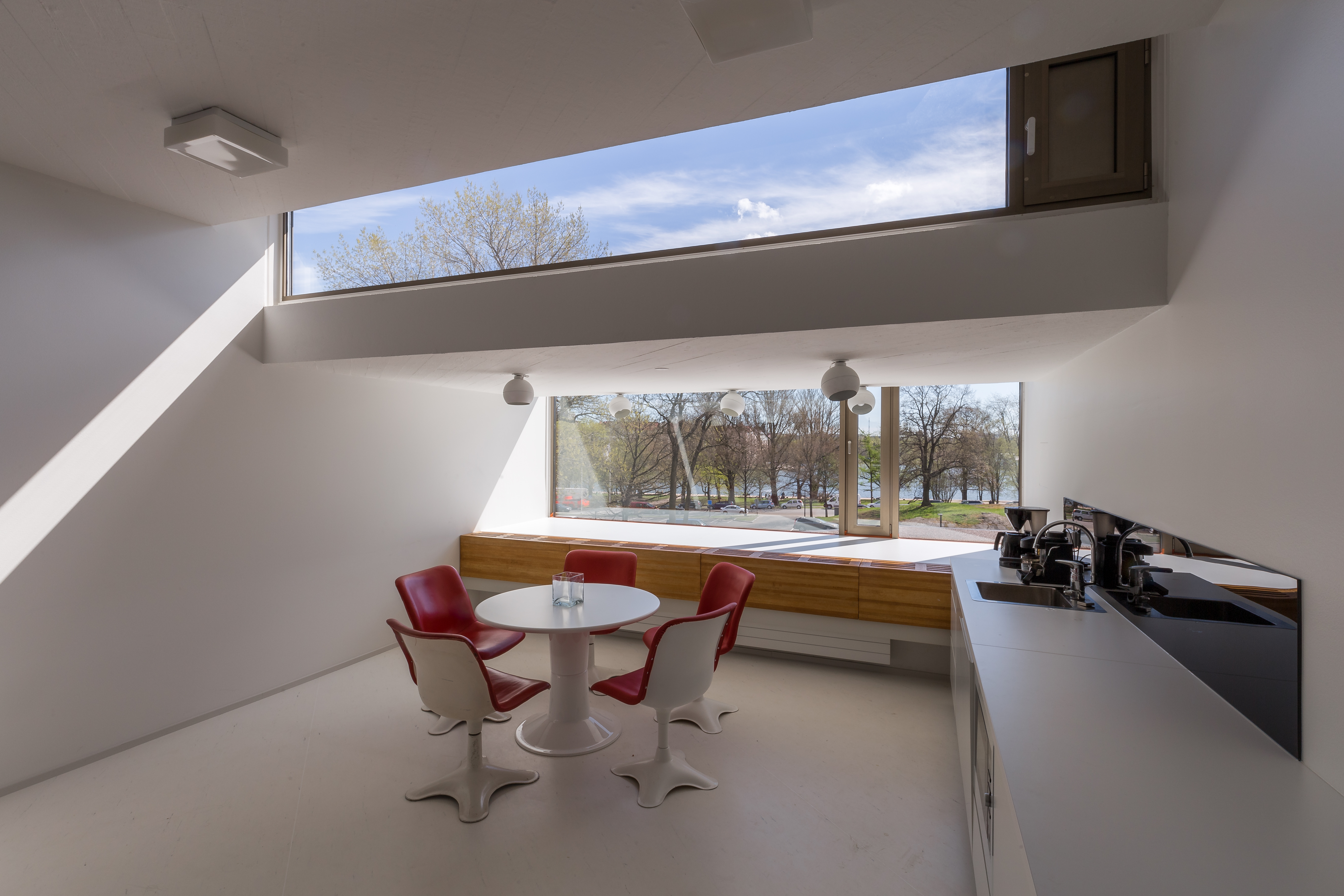 It is an appreciated building, the finest theatre of its time and Penttilä’s finest design. The 1960s are thought of as a rational, linear period, but this building is multiform. It involves sculptural, truncated features. Hugging the surrounding topography, the building turns its back on the district of Kallio and opens up towards the water view. Facilities for the public and personnel are distinctively separate. In terms of functionality, the theatre and its workshops have stood the test of time. There was a huge number of original drawings, and each detail has been carefully studied. Although the building is manifold, the same trend is repeated here and there from the formwork to the carpet seams and the original parking arrangement. 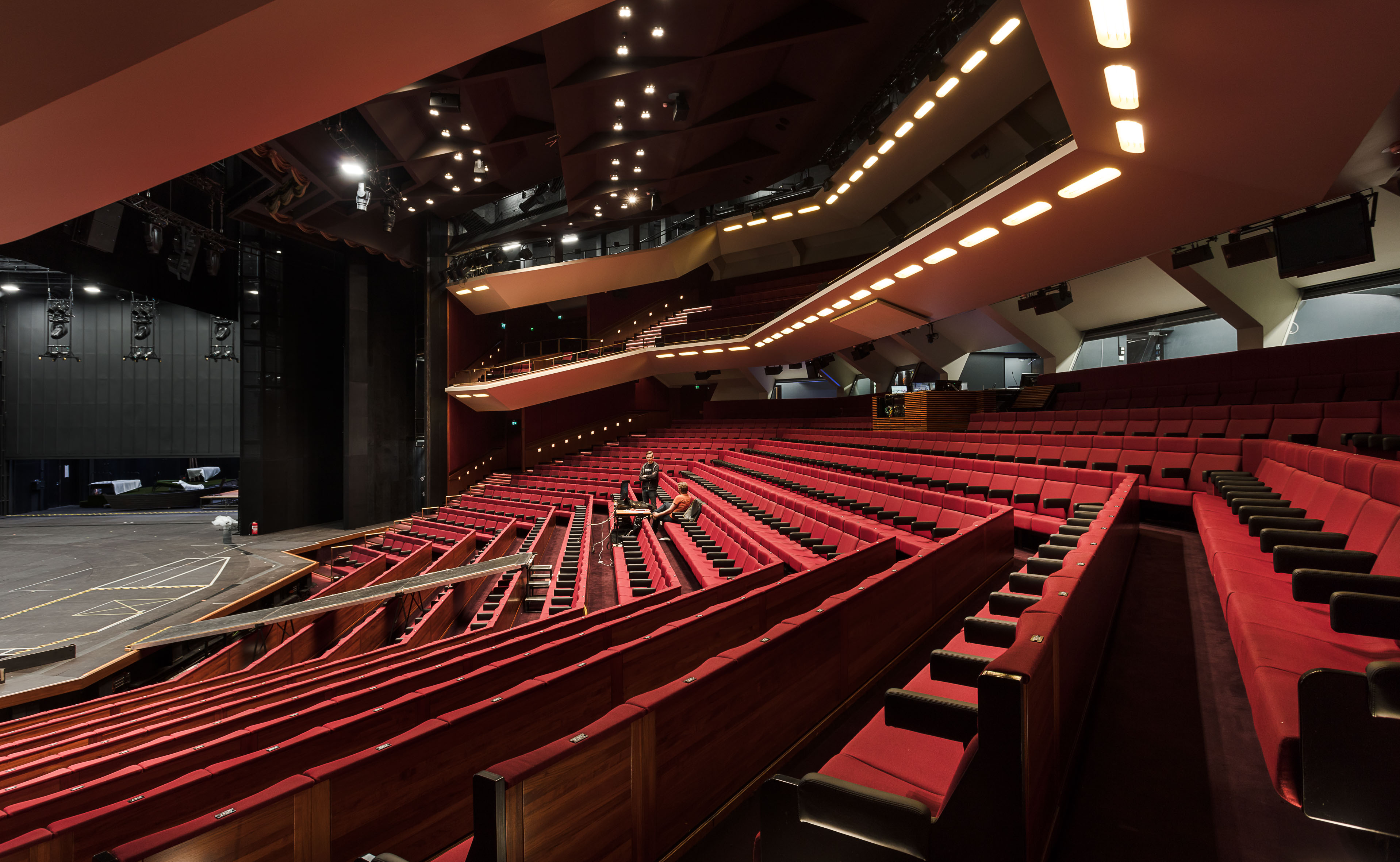 What kind of an assignment was the revamping of the theatre?

Very typical. The need for renovation usually sets off with the building engineering that starts to malfunction. Design and construction problems usually involve engineering, too. It is a challenge to discover channels and cavities in which to hide the technical systems. The architect is in charge of fitting together all the structures, architecture and building services. Where the alterations are not visible, we have succeeded. Architectonically streamlined indoor aisles characterize the Helsinki City Theatre, and they are dominated by low, cast-in-situ formwork-patterned ceilings. The problem was how to exchange the ventilation ducts covered with asbestos above the vault-suspended ceiling, an item listed for conservation by the museum authority. Buildings from the 1960s commonly include complex cast-in-situ concrete structures. They were challenging to construct in their time and deserve nothing but respect.

What kind of limitations were involved in the project?

The conservation plan was customized for this renovation, and the plan was exceptionally detailed. Conservation requirements concern everything from foyer lighting fixtures to dressing room lockers. One important concern was accessibility. We worked on it together with the City’s accessibility officer (Pirjo Tujula), not only in terms of reduced mobility but also to provide solutions for the visually and hearing impaired. For example, one can follow the brass rims installed on the floor with a cane. Signage, too, considers accessibility; it consists of haptic, tactile floor plans. (In fact, these were designed in cooperation with former architect of the Finnish Federation of the Visually Impaired (FFVI) Hanna-Leena Rissanen, who is now a building inspector.) 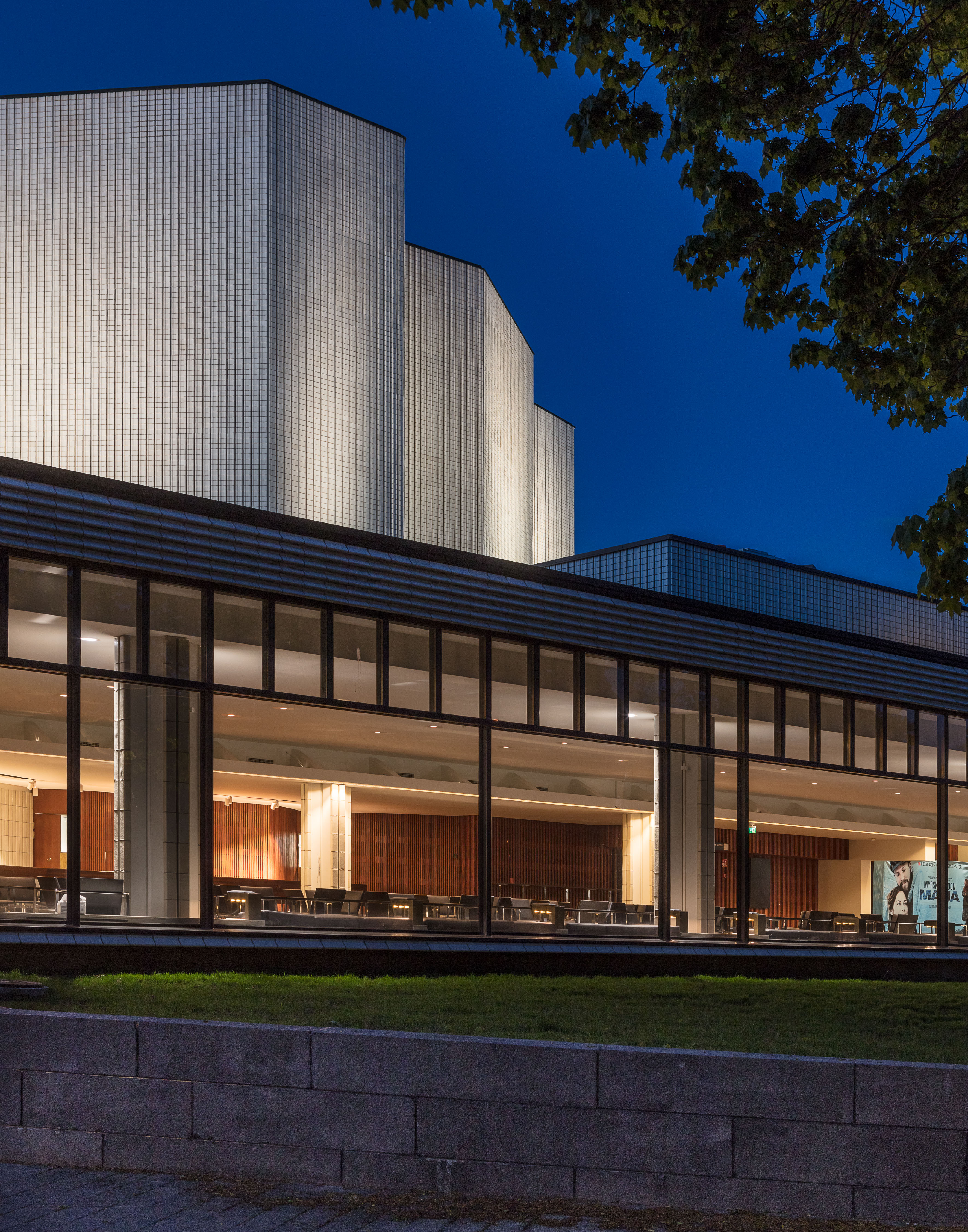 How were the materials and details renewed?

All the surface treatments in the conserved areas were checked in cooperation with the City Museum (Mikko Lindqvist). We explored the types of materials that were originally used. At times, this resembled detective work. I called the architects who were previously involved and one of whom remembered that the small auditorium was upholstered in black, while another architect recalled it to have been red. Eventually we found – in a folder at the Finnish Museum of Architecture – a very small swatch of blue and brown material for the seats. Partially broken façade tiles are another interesting story. After several twists and turns, we found the ceramist who recognized the signature in the original drawing. With the help of original designer Otfried Blumchen, we engaged in material and model studies. The new tiles were manufactured in the Pentik factory.

How did the façade change?

The façade did not change at all, although a couple of small extensions were added to the building. Façade lighting was extended to reach the low wings. With the lighting designer, we studied the direction of the light very carefully. The tile façade resembles a relief, and we did not want light to hit it directly but from an angle to disclose the rippling in the surface. We had to test an applicable angle; if the light is too near, it is too strong and highlights the faults. Since it was summer, we had to do the lighting design at night. We stayed up all night to be sure to know how the lighting will appear.

What is your favourite part of the theatre?

The series of spaces in the foyer are elegant. The foyer winds and follows the shape of the terrain. The glass systems in the façade are also beautiful. The teak walls have endured time surprisingly well. We just removed the grating and installed new fabrics and baffles. Having worked on many renovations before, patina is something I think about when selecting the materials: how does the material wear and what will it look like in fifty years? 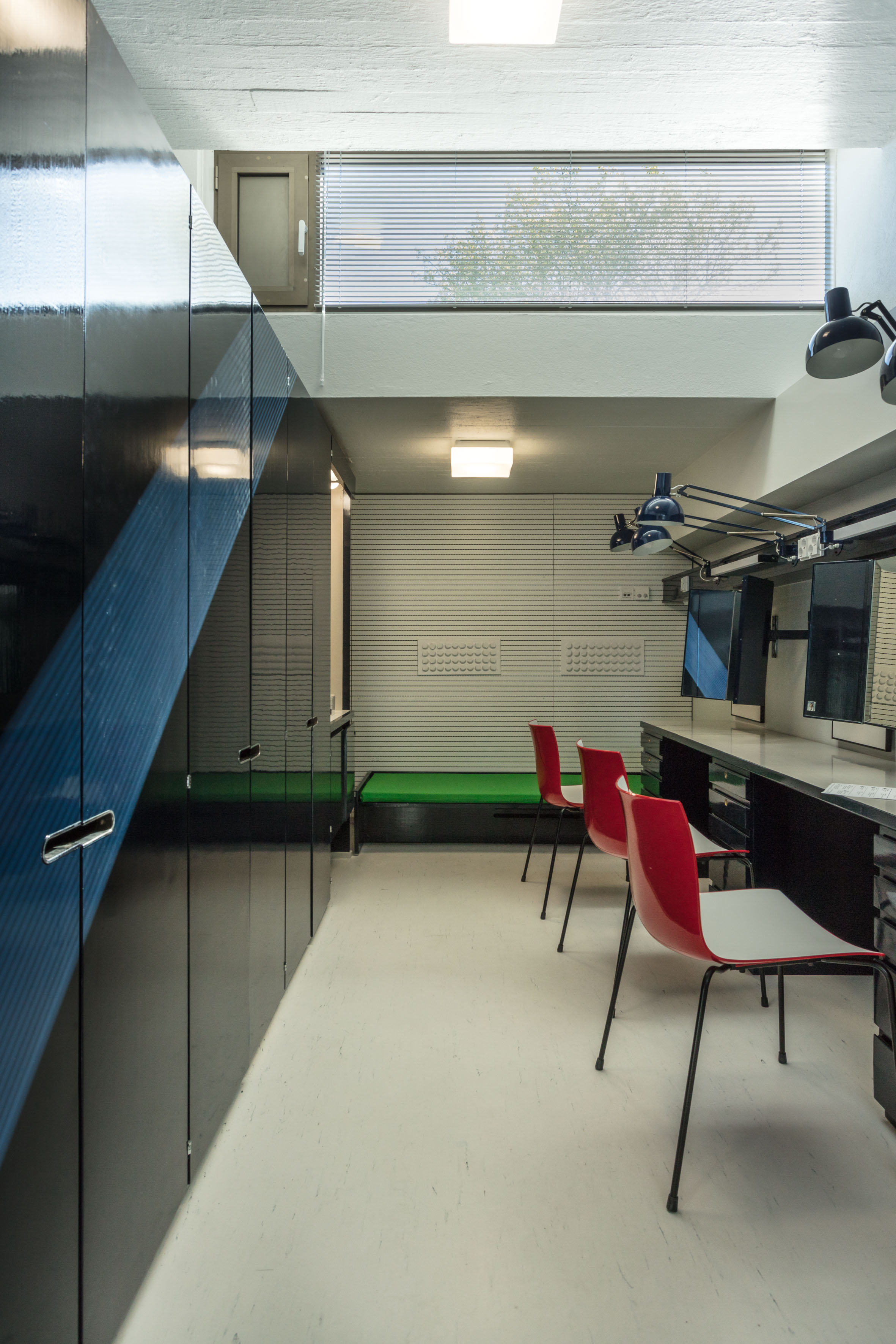 Which building do you admire and why?

During my studies, I learned to know the then-new Myyrmäki Church designed by Academy member Juha Leiviskä. It represents a layered architecture typical to Leiviskä. It is a narrow building placed like a wall by the railroad, maintaining the park-like nature of the plot. The best feature of the building is how the light filters through the panels and the roof beams, creating alternating light and shadow graphics on the white wall in the back. This impression is complemented by Kirsi Nyrhinen’s transparent textile art and pendant lights arranged in free form. Just like in the Helsinki City Theatre, the main hall is wide and not very deep, which enables an intimate atmosphere by the altar. I hope this building can be renovated by paying homage to the original architecture. 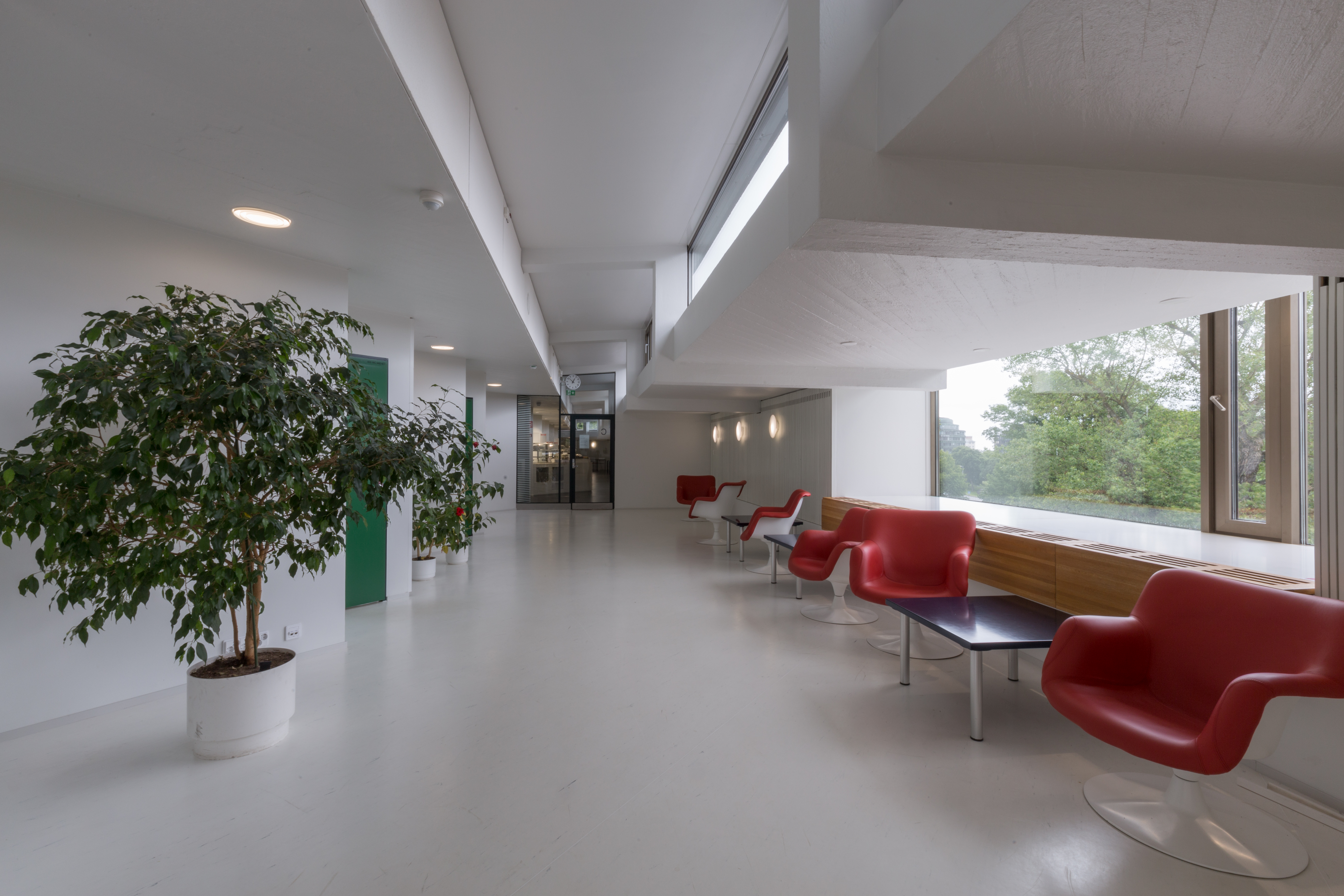