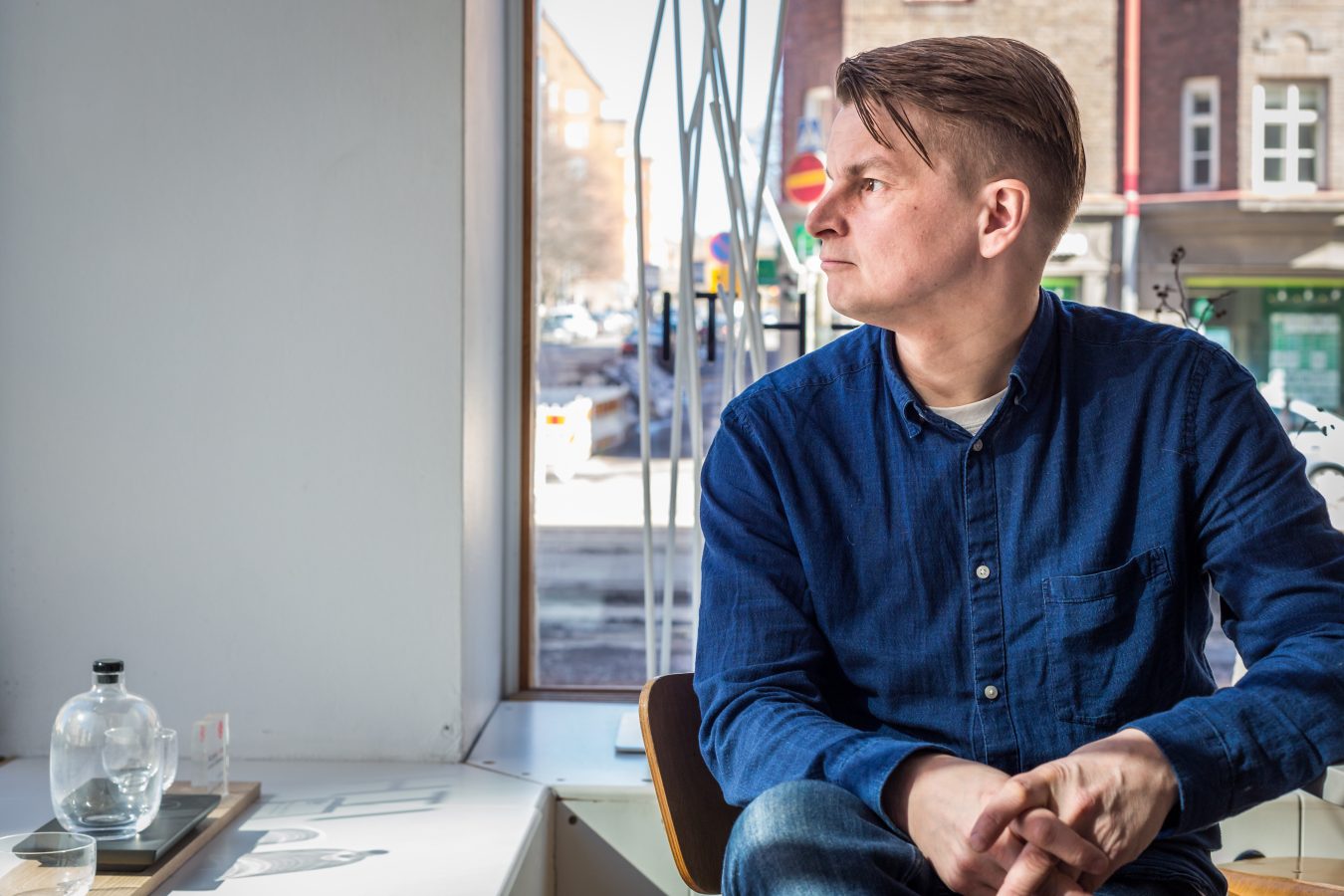 The Weekly Studio series visits the workplaces of interesting people. This week Crystal Bennes spoke with the furniture designer Mikko Laakkonen, whose initial interest was in making musical instruments.

You originally studied as musical instrument maker and then later moved into furniture design? Can you tell us about that?

I was six years old when my father gave me a knife for my birthday. Straight away, I took my knife outside to try to carve something in wood. Of course, I immediately cut my finger, but that was basically my first attempt to design something. As a child, my parents told me, I was always doing something or planning something, like how to build my own house. But when I was a teenager, I played guitar and wanted to have my own band. I was also a skater, so I always thought I’d become either a rock star or a professional skater.

At some point, there was a music exhibition in Turku which included a stand from a school where you could learn how to make guitars. I applied to the school and was accepted, so I spent three years learning how to make electric and acoustic guitars and other folk instruments. But in my class, there was a guy called Juha Ruokangas and he was amazing at making guitars. In fact, he now makes guitars for actual rock stars, people like Mick Box. He was really good and compared to him, I knew I just wasn’t as good at the actual making. Of course, it wasn’t really the reason I later applied to design school, but I thought I might be better at planning and designing things rather than just making guitars.

So, then you did a furniture design course?

Coming from a background where you were doing one specific thing – making guitars – in a very hands-on way, was the Master’s programme as equally hands on? Or was it more about the industry and the manufacturing process?

It was very hands-on as we made all of our own prototypes. Actually, we had very little learning in terms of how the industry works overall. It was much more about self-driven projects. In general, I think it’s crucial for designers to be able to make things and to understand how things are made. 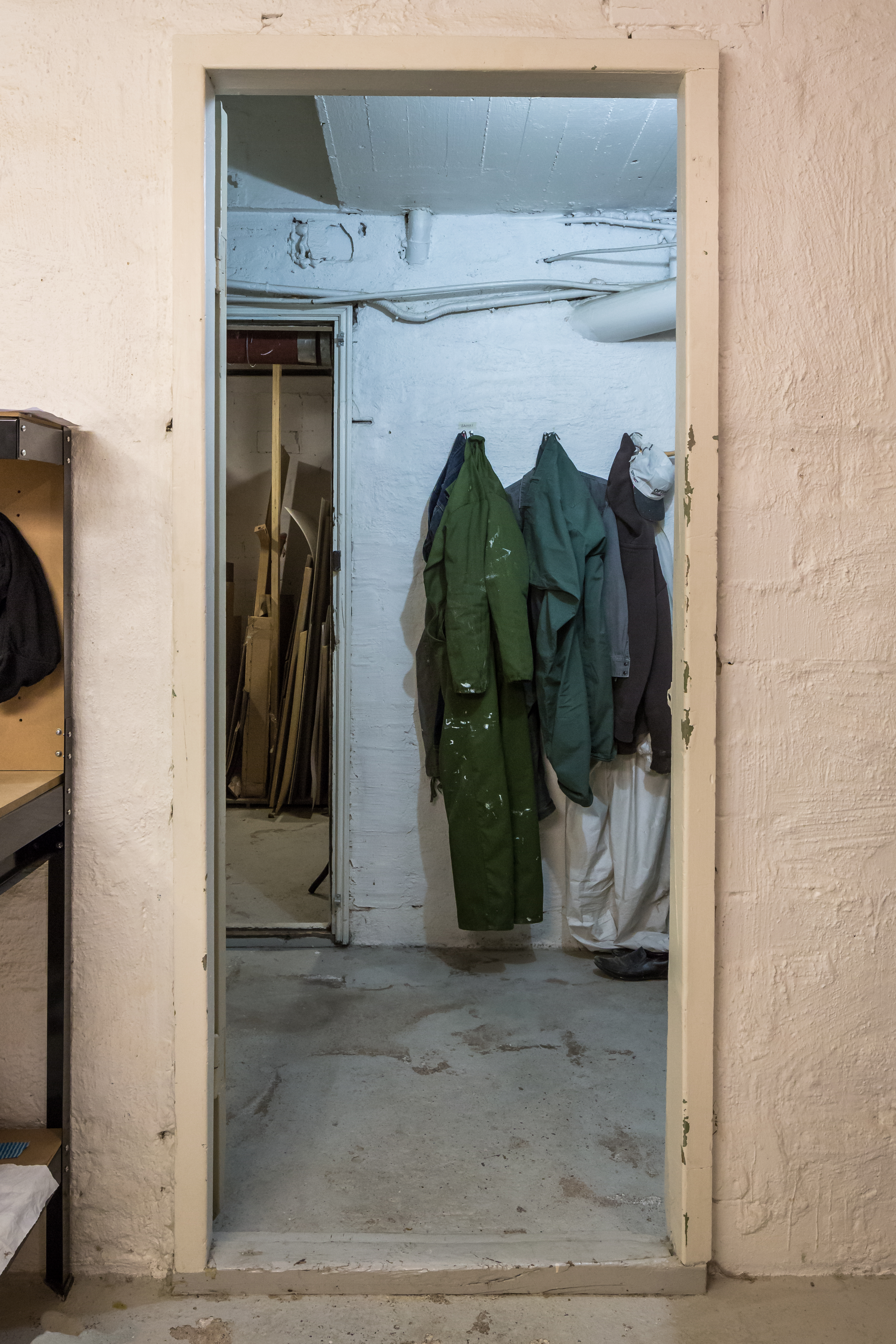 After TaiK, you worked for various design and architecture firms before starting your own studio?

Yes, I worked in a number of different design, architecture and interior architecture studios for about five years. Then, in 2004, I started up my own studio.

Did you always know that you wanted to start your own studio, or was it a by-product of working for other companies?

A bit of both, I’d say. For some time, I was happy to work on interior architecture projects for other companies. But in the end, I realised interiors weren’t really for me and that product design was more appealing. But in Finland, there aren’t really any companies where you can work as an employee and do product design and furniture. They are either interior design or industrial design and I realised that if I want to design and make furniture and lamps and pieces like that, I needed to establish my own studio.

Because you’ve had your own studio for a while, I wonder whether, looking back, you wish you would have done anything differently?

Of course, there are things I know now which I didn’t know then. I don’t know. It’s hard to say, because I think there’s a journey that you have to take and find your own way. But maybe one thing was that I should have learned Italian and maybe even moved to Italy.

Your mention of Italy is interesting because you’ve worked a lot with some of the same companies and many of those have been in Italy. I know for a lot of product designers, Italy is still considered a kind of holy land because there are still so many manufacturers there. I suppose I have two questions here. One, is about longstanding relationships with companies and what you’re looking for in those relationships. The second is about your personal interest in Italy.

To answer the first question, I think long term relationships are essential. It’s the only way to work because it is like having a relationship with another person. You get to know the company and they get to know you, so things become easier and easier the longer you work together. The last thing you want is a one-night stand, so to speak. It’s not worth it. I really believe good design is like a conversation. And that conversation gets easier as the relationship gets stronger.

Of course, I have created one-off projects with companies which hasn’t resulted in a longer-term relationship, but that’s not what I’m looking for as a designer. And financially, I think you really need these long-term relationships to build up economic stability as well, so it’s very important to develop good relationships.

As for Italy, I can’t speak for other designers, but for me it’s a place where I love to spend time. Since I was very young, about six years old, I’ve been privileged to know a guy whose father is Italian. They used to live in Rome, but of course, my friend grew up in Finland. But having that proximity to Italian culture for such a long time, it made me feel like I had a close connection to the place. I just like to be there. I like the food and weather. And for the most part, I like the way people work there. For example, you often go out to eat or drink with the owner of a company and only after a nice meal do you start talking about what the next project should be. It’s not as formal as some other ways of working. 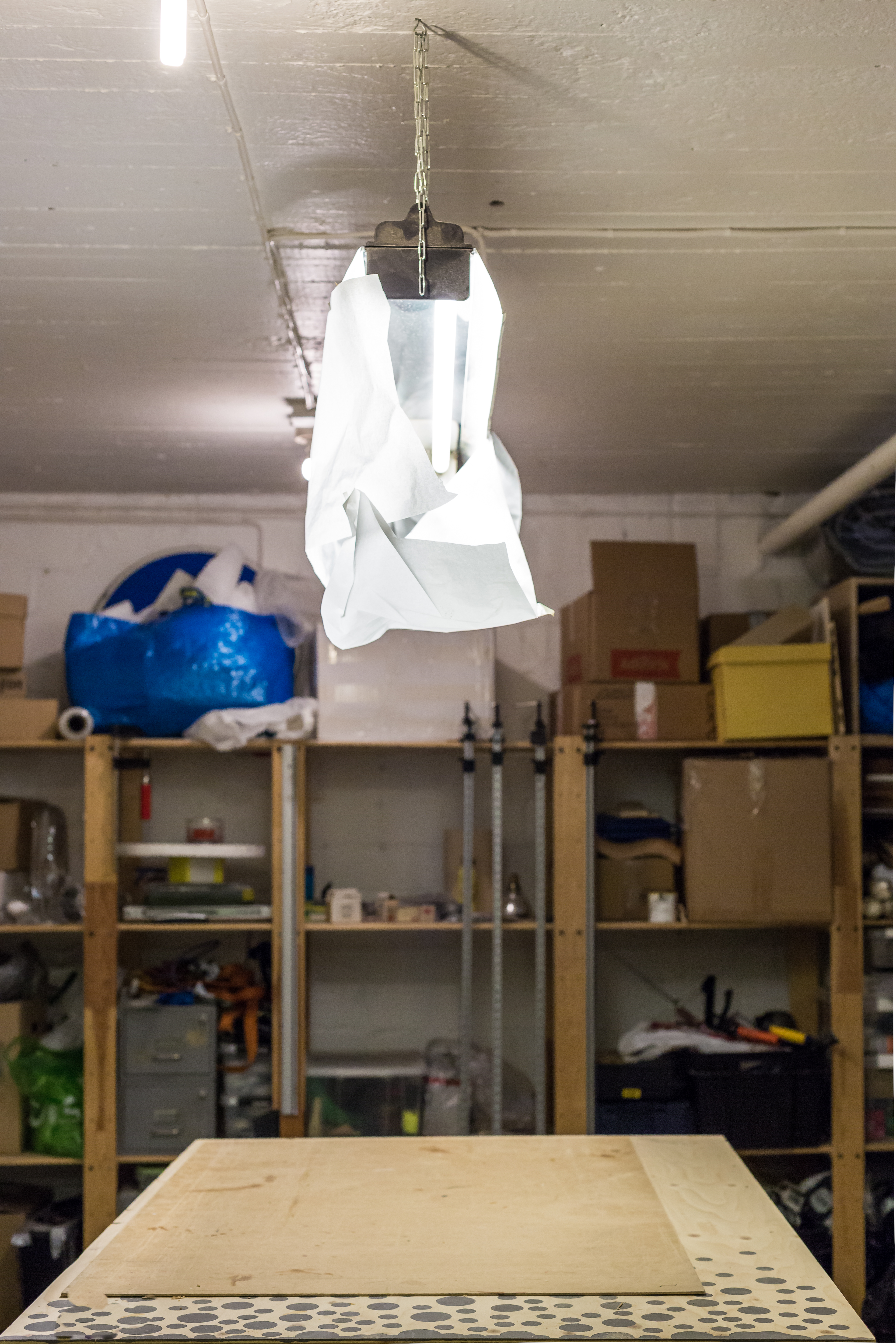 What about your working methods? Do you sketch on paper or do you prefer modelling on computers?

I sketch a bit, but my sketches are more like notes as I’m not great at drawing. I move quite quickly to the computer to mock up designs. It depends on the project, but if possible I print out 1:1 or make some mock-ups downstairs in cardboard. With things like 3-metre sofas, it’s quite difficult to make a 1:1 prototype in the workshop, so we might mock up some details instead.

Given that there’s much more consumer awareness around sustainability and over-consumption, particularly in the use of plastics, I wanted to ask you about environmental concerns in the design industry. I read in a previous interview that your view on ecological design was to make high-quality, long-lasting products. Could you expand a bit on that?

I genuinely believe that if you design something it should, at least this is what I aim for, last for a minimum of 100 years. In that way, for me, the materials used become a little bit less of a concern if I know I’ve designed something with a lifespan of 100 or 200 years. In terms of plastics specifically, I don’t believe that we should suddenly refuse to use all plastics. I feel there’s a place for environmentally-friendly plastics, eco-plastics which are easy to recycle or are biodegradable. Those are directions which I hope we pursue in the future because it seems impossible that we will suddenly stop using plastic in the modern world. But I think we have a long way to go to get to that stage, unfortunately.

Do you think there’s a role for designers in the development of some of these new materials? Or do you see the designer’s role as more akin to finding productive uses for new materials dreamed up by materials scientists?

Yes, absolutely, I think designers have a key role to play. I really think that designers should collaborate with materials scientists to develop new materials. It would be the perfect solution. It’s often the same in engineering as well – this is perhaps a bit black and white – but engineers often create something but then don’t know what to do with it or they aren’t able to see a useful application for humans. And, of course, designers are people who really think about what is useful for humans, so I definitely think there should be much more close collaboration between designers and engineers and material scientists. Personally, I’m very interested in new materials. Actually, my thesis when I was at TaiK looked at a composite material which used natural fibres. But in the end, I’d still rather design new chairs. 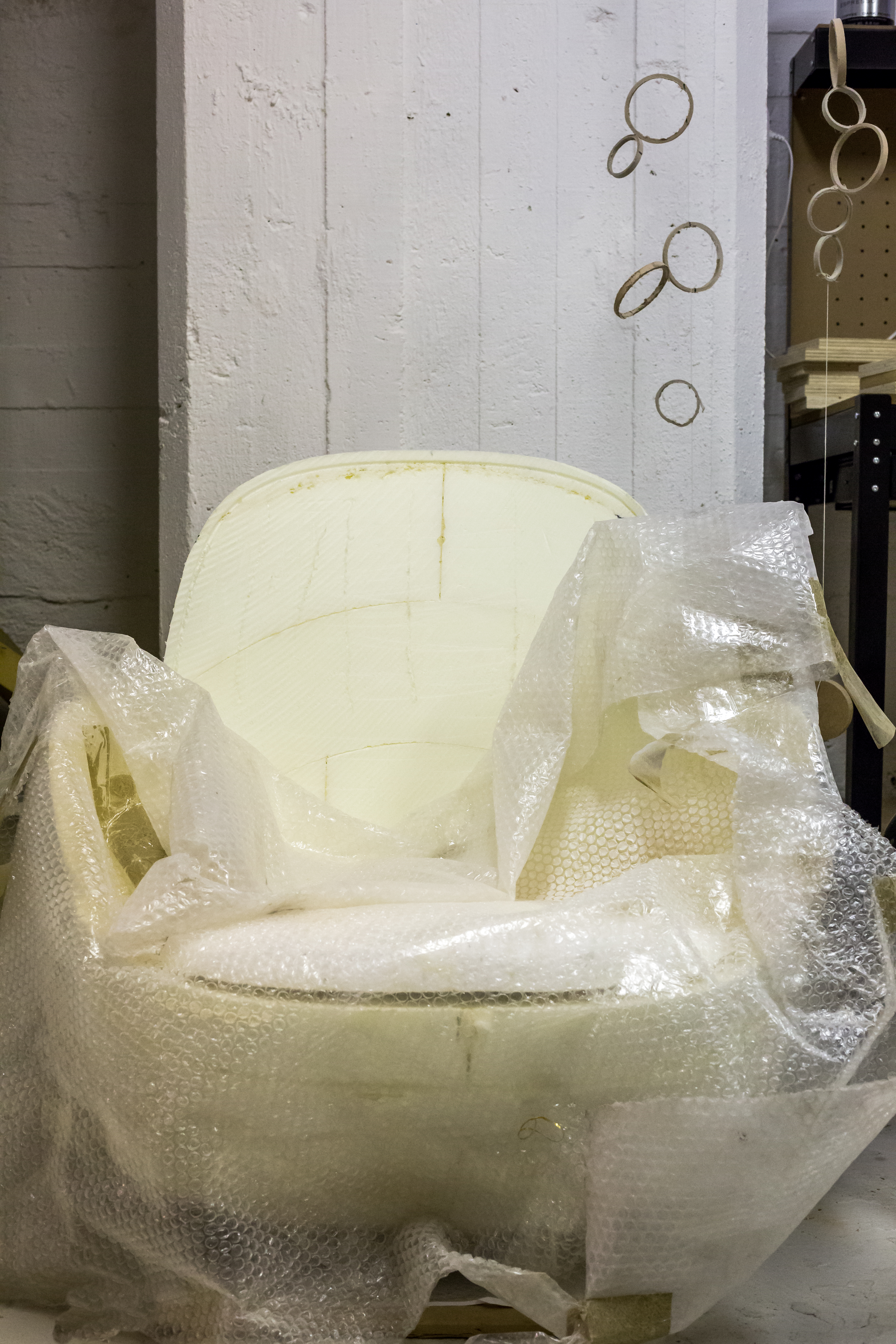 I know you’ve just launched new collections at Milan with Inno and Isku, but I gather you’re currently working on some new glass pieces as well?

The glass work is more like an expensive hobby. I have the privilege to occasionally work in In Nuutajärvi, but the pieces I make there are more like fine art projects than commercial products. I’ve been studying an old method to make glass – the filigree technique from Murano in Venice. They used to use it a lot in Nuutajärvi, as well, but I’ve been working on how to integrate that technique into a new lighting piece, almost like a sculpture. Then, of course, I have some furniture pieces. I’m probably going to have a new room divider for Inno at the Furniture Fair in Milan this year.

I always end these interviews with the same question about the Finnish design tradition and aesthetics and the impact that has had on your own sensibility. Can you see a clear link in your own work to that tradition?

Yes, of course. I studied design in Finland and it’s impossible to escape the tradition. I can say that I am part of that tradition and that I do make Finnish design. I certainly believe that less-is-more and that there should be a reason for everything you do, both of which are the key drivers in classic Finnish design. Although there was an interesting moment in Finland, particularly in Finnish design education, in the early 90s and 2000s when I think that some professors really forgot about humans. For example, the idea that chairs should be designed for people rather than for architecture. I feel very strongly that design should be first and foremost for people. 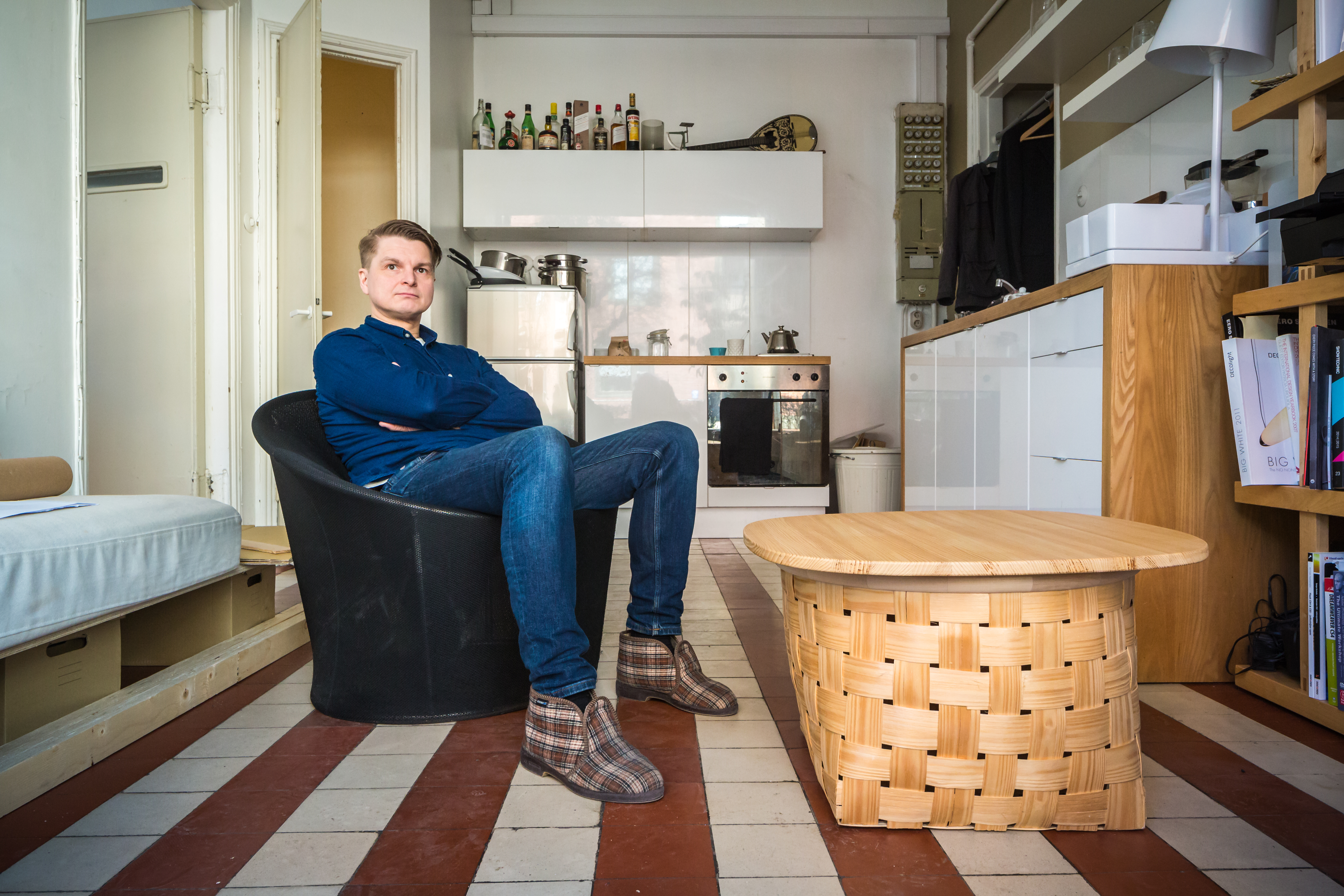 So, you don’t feel weighed down by the golden age of Finnish design?

To be brutally honest, I don’t really think so much about it. Of course, I have a lot of respect for the golden-age of Finnish design as well as for designers like Charles and Ray Eames or even my contemporaries, people like the Bouroullec brothers. But I don’t feel any pressure to compare myself to what they were or are doing and live up to it. I’m just trying to do my best with every project. 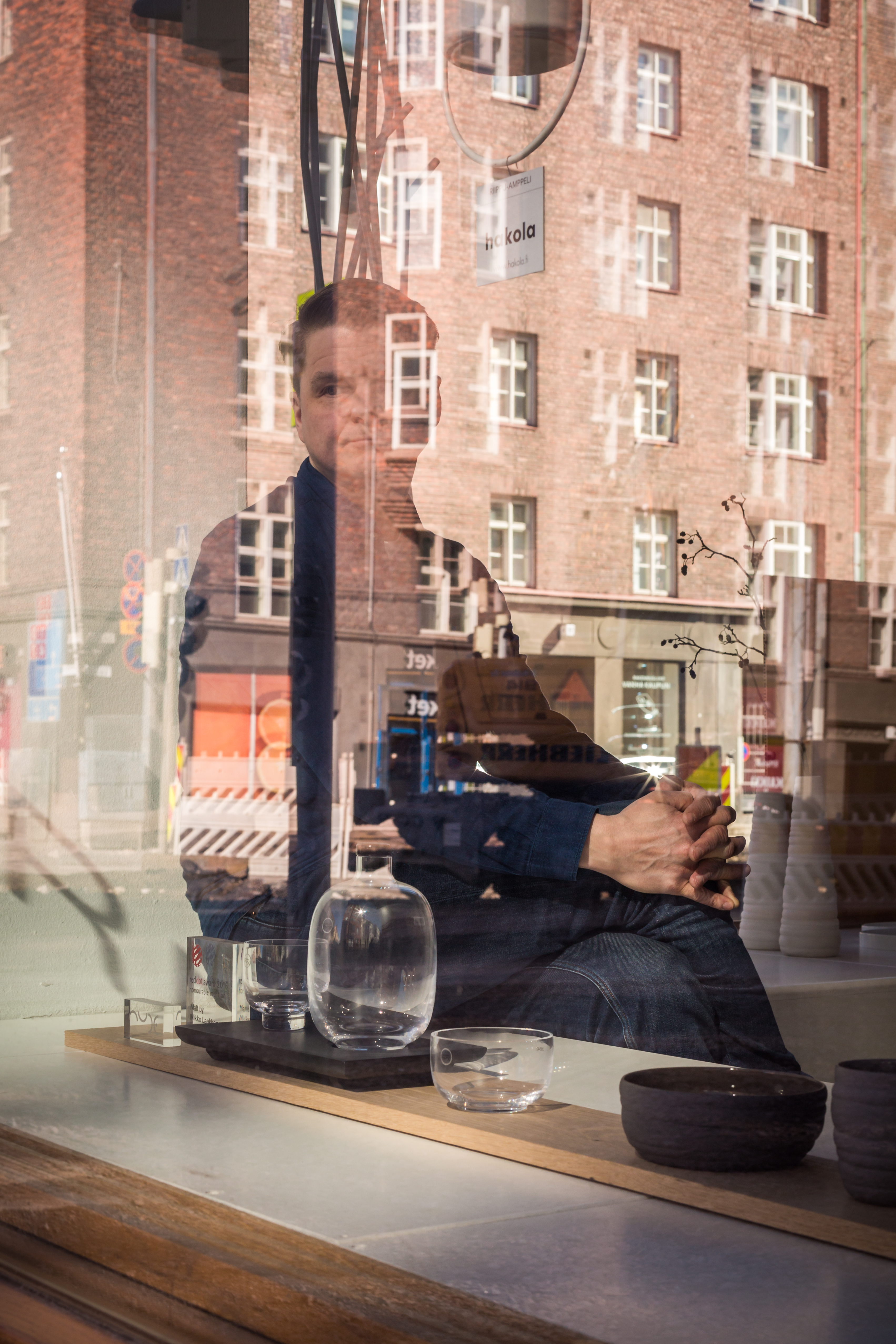