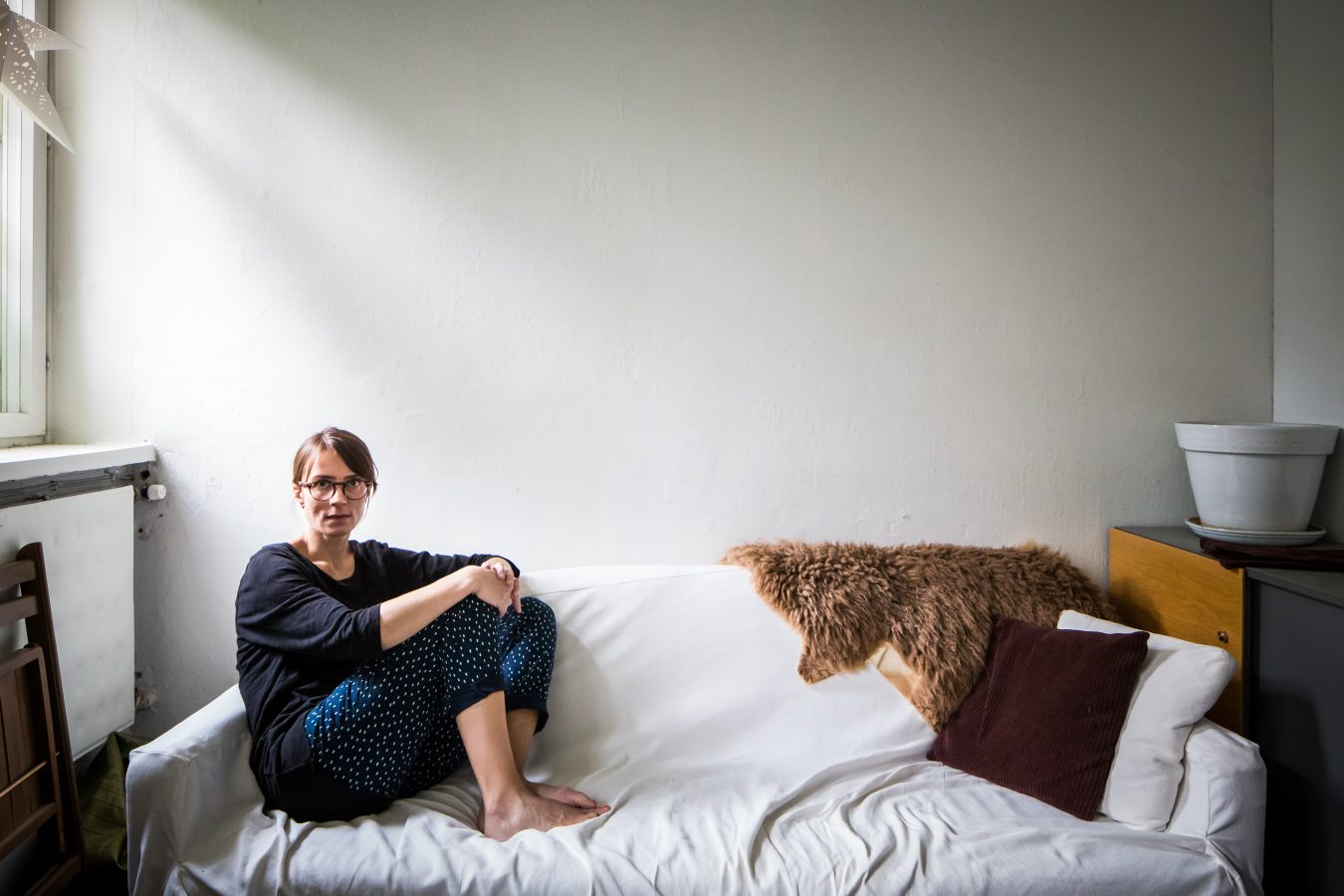 This month Weekly Studio talks with textile and pattern designer Reeta Ek about winning the Young Designer of the Year award and why it’s important for designers to lift the lid on the creative process. Weekly Studio presents interesting studios and their owners.

Could you say a little bit about your background in your own words?

My background is in Fine Arts. I studied painting and after graduating I painted for a few years. I became very interested in painting wallpapers and studying repeats. For me, there was something appealing about these repeated elements, the more decorative the better. Eventually, I started to think that maybe textiles would be the way forward. 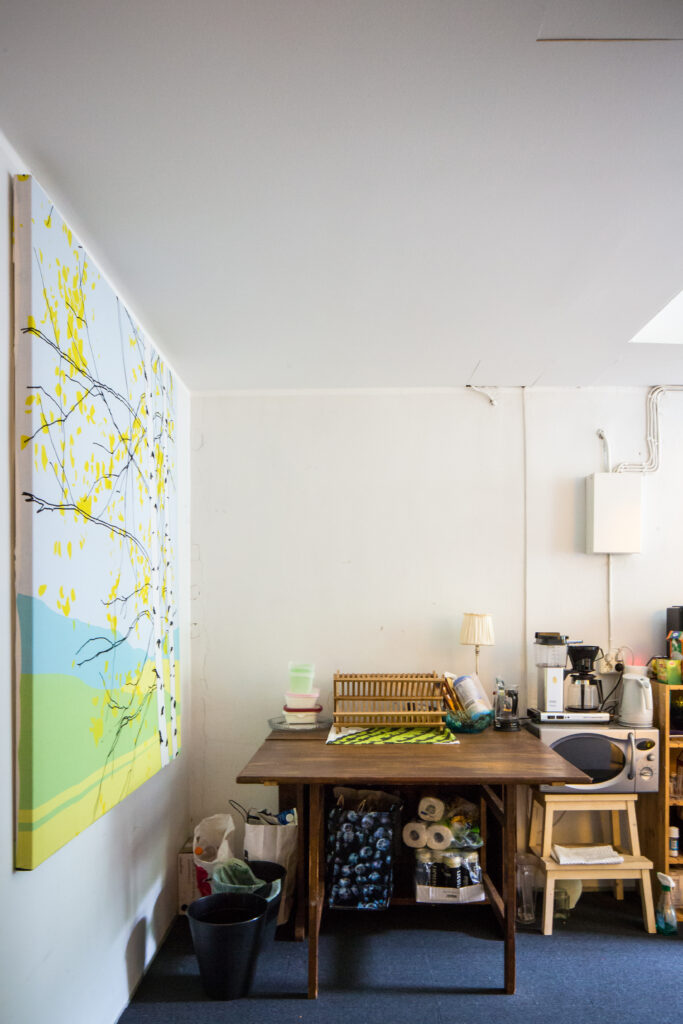 But repeated elements and old wallpapers sounds like a perfect project for an artist! There must have been something that drove you to look elsewhere?

I was quite lonely, which I think is common among artists. I missed something and lacked a certain sense of satisfaction. It’s difficult when you have to be the only one deciding what’s good. I think there are two sides in me, the artistic side and then the side that wants to organise things. In textile design, what interested me was the possibility of combining the two. With my thesis, especially, I tried to bring together my fine arts background and textile design.

That’s interesting, because your way of working seems grounded in a fine art tradition. This idea that initial mark making by hand is very important, followed by computers and digital processing.

I feel that now I’m at a point where I would like to start to painting again. I think I’d like to have other processes than just digital as the final result. Even though I do everything first by hand and then scan and colour by computer, I would like to paint again. 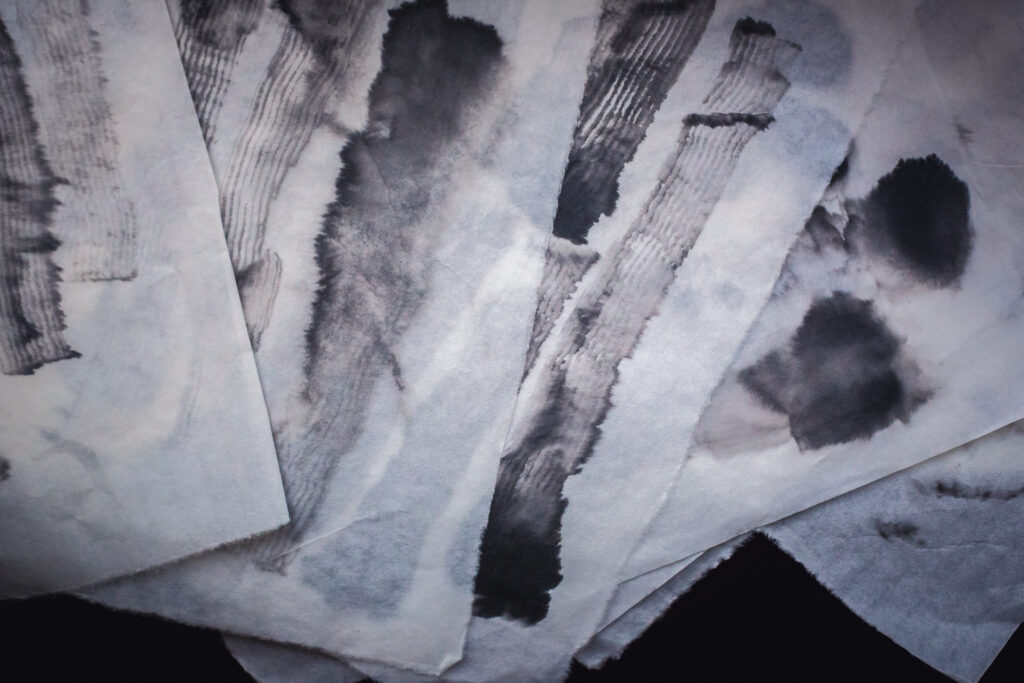 As a fine artist or as a textile designer?

I don’t know. I wouldn’t want to put myself in different boxes: ‘Here, I’m an artist; now, I’m a textile designer.’ The interesting thing is to be fluid. I don’t want to be stuck in a box.

Yes, we are four women here sharing the studio in Lauttasaari, which is also where I live. I work at home sometimes, but it depends. There are two journalists, one graphic designer and me. We all have children the same age, so we got to know each other because of our kids. It’s a bit like dog owners…

And at the moment, you’re preparing for the Young Designer of the Year exhibition. Organising an exhibition is quite a different thing to design and I wonder what you find useful about doing exhibitions.

Well, one reason is that I mostly work with making patterns, not so much with the materials themselves. In the future, I would like to use more textile materials in a non-traditional way, but so far my work has been more about designing surfaces.

With the sketchbook project, it was interesting to show people the process behind the products because I don’t design ready products. I work for companies who create the final products that people see. Exhibitions allow me to show my part of the work, especially the sketching process which is the most important part of my work. I was surprised by how interesting people find that process even though the subject is very simple. These are the basic things that every creative person thinks about, how the creative process works and the different steps, but I tried to explain it all in my own words. 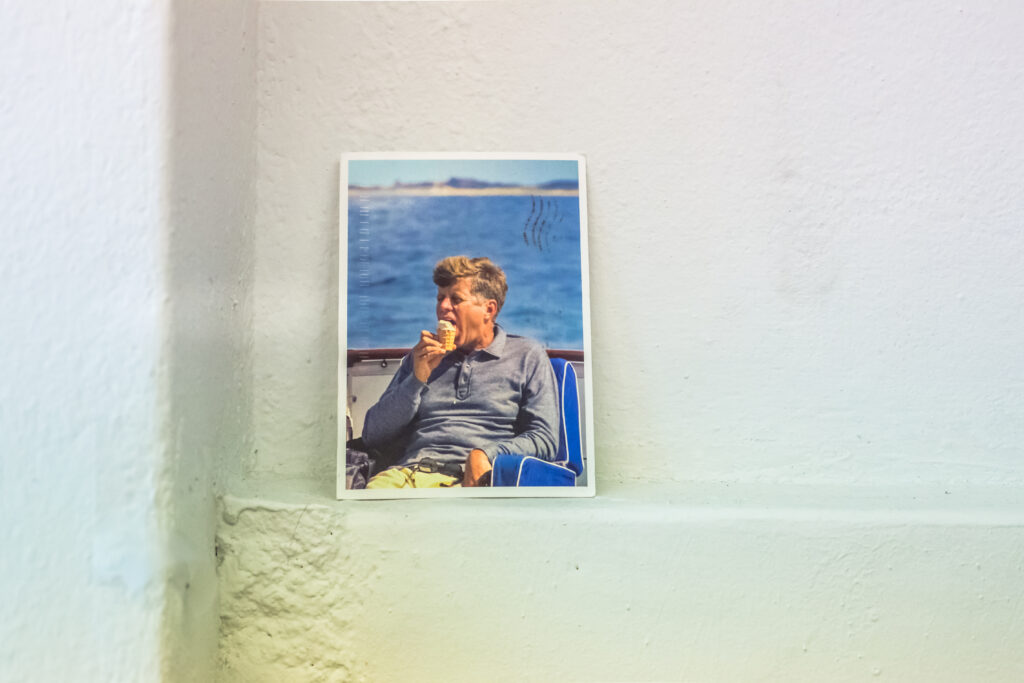 Your thesis work has had a lot of positive coverage. What are your thoughts on why people seem to have responded so favourably?

Honestly, I don’t know and it’s something I have thought a lot about. I find myself thinking, ‘Is there something I missed?’ Why are people so interested? Have they understood it correctly? Maybe my work is easy to look at because it’s not difficult to understand. It’s quite a logical process. Or maybe it’s because of the colours. People seem to like my colours.

I wonder if it’s analogous to magic tricks, in that people are often delighted by the trick, but when they understand how the trick works, it’s somehow even more wonderful. Many creative people are often quite secretive, so perhaps being able to see exactly how you made your designs – the scraping of the bottom of a cup or a piece of cardboard – is delightful.

I think you’re probably right. It’s like those cooking programs that are so fascinating and relaxing. Someone prepares a dish, but you get to see exactly how they do it before getting to the final product. Many times design is so mysterious, even though behind-the-scenes, it’s really not mysterious at all. I like the idea of designers being 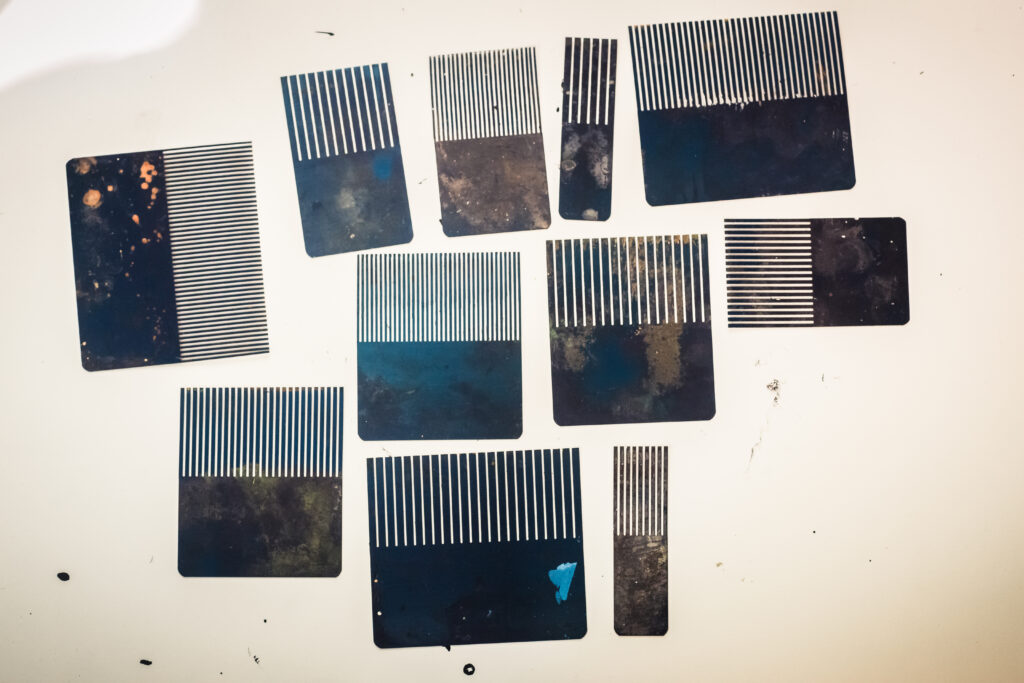 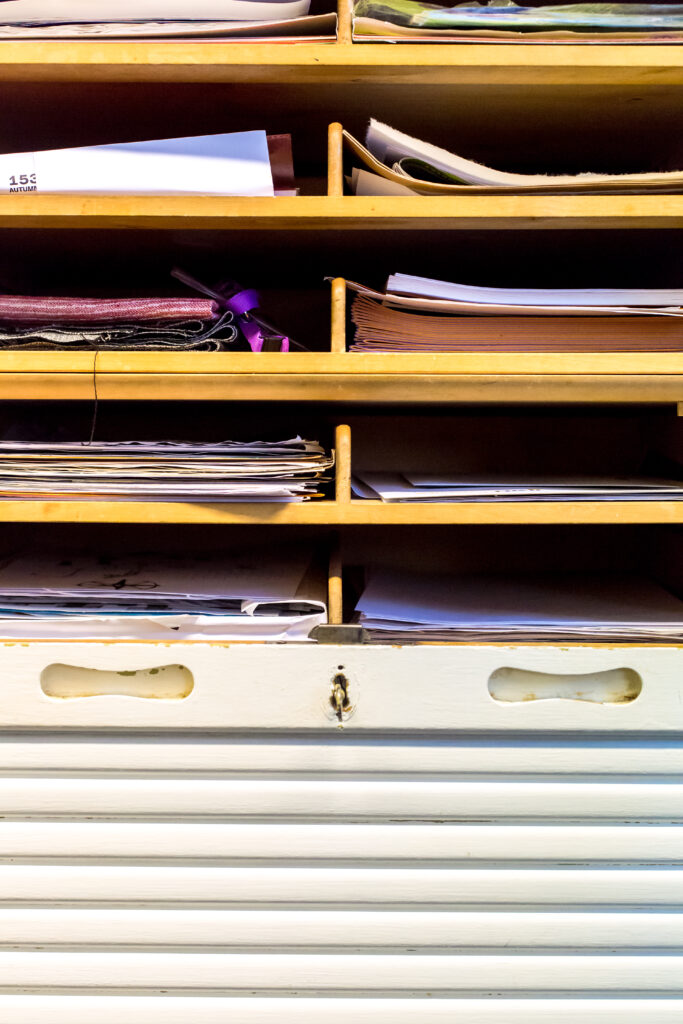 In the thesis, you talk a lot about your desire to create a style or a method for use in your future career. Do you feel like you found what you were looking for or that you inadvertently made a prison for yourself with the style?

Good question. I feel like I need to move forward with the process before I get stuck, but I definitely think I found something. Maybe it has become a style, but I wish that it was more about the process. The problem with being able to develop my process is that I need to have more time. For the thesis, it took about four months before the sketching came together, but it’s difficult now to find the same amount of time.

Would you say that you have rules for your mark-making process?

I don’t have any rules, no. I try to keep the process very open. The most important thing for me is to not to be too serious. I want sketching to be fun. Of course, it’s not always like that, because many times when I start to work I’m frustrated or afraid of the process, asking myself whether I will ever do anything good again.

When I studied the creative process, I understood a bit better that I could trust the process. Even if I feel horrible, if I give myself time to figure out the ideas, something good will happen. But I try not to take designing too seriously. I don’t want to be prisoner to the feeling that I need to succeed or be perfect. Although, I work hard and have a strong work ethic, so I need to remind myself to relax from time to time.

I read that one of your parents was an architect and that you grew up in a house with no ornamentation or bright colours. Do you think that had an influence on your aesthetic sensibility?

I believe so. Maybe. I don’t know. I don’t exactly know how to put it in words, but after many years, I’ve finally understood that the way I see certain things or think about certain things comes from my mom or the way we always had something at home. Also, my mother worked at home and owned her own company and that has had a strong impact on me – the way that I saw her taking responsibility at work. And my father is an engineer and he built the house and is always doing some construction or other project. I can see now how important it is for me to be doing something concrete and I think a lot of that comes from them.

Another thing I read was from Noora Niinikoski of Nanso who said that imperfection is what makes your designs interesting. What do you think she means by that?

I actually thought about this some time ago. For me, it’s clear, but for people who see the ready, finished product, they perhaps don’t understand. But Noora, who sees the sketching process, I think she means that my sketches aren’t perfectly organised and they aren’t in perfect harmony. I think she means that I have a twist, or I often try to have a twist. I try to keep a relaxed touch.

In terms of composition on the way to the final print?

Yes, in terms of composition. It’s hard to see in the ready product, but I think Noora is referring to the process which takes place before the product is finished.

And what about future projects? Maybe you could talk a little about your upcoming exhibition.

It’s at Pohjoisesplanadi, which is quite a challenging space because there are windows on all sides and it’s also small. Initially, I thought I had so much to show that there would be no problems. But then when I started to put it all together, I realised that I couldn’t show everything or it would be a mess given the different colours and scales of the patterns. I then chose some of my important patterns and designs and had them digitally printed. It’s been interesting, because most of my designs are for clothes, we have had to remake the fabrics.

I’m also showing the creative process, the sketchbook process, to give people insight into how these designs are made. The main reason I was awarded the prize is because of my personal style, so it’s important to show the connection between the clothing and my process.

Do you feel secretive or proprietorial about your work? Does it worry you to put your process out there for everyone to see?

Sometimes I do wonder whether I should show the way that I work… Recently, I went to see an exhibition by Danish textile designer Margrethe Odgaard in the Design Museum and that was super inspiring and she also opens up about many of her processes. Written on the wall was the following: “Make the process as important as the outcome. Share your knowledge, ideas and skills without hesitation. Free yourself from the limits of coolness.” I want to subscribe to this kind of transparency. You will always have your own style and ideas and the way I work is actually a very common way of making marks.

That’s a much nicer way of thinking about it than constantly being paranoid about people stealing your ideas. 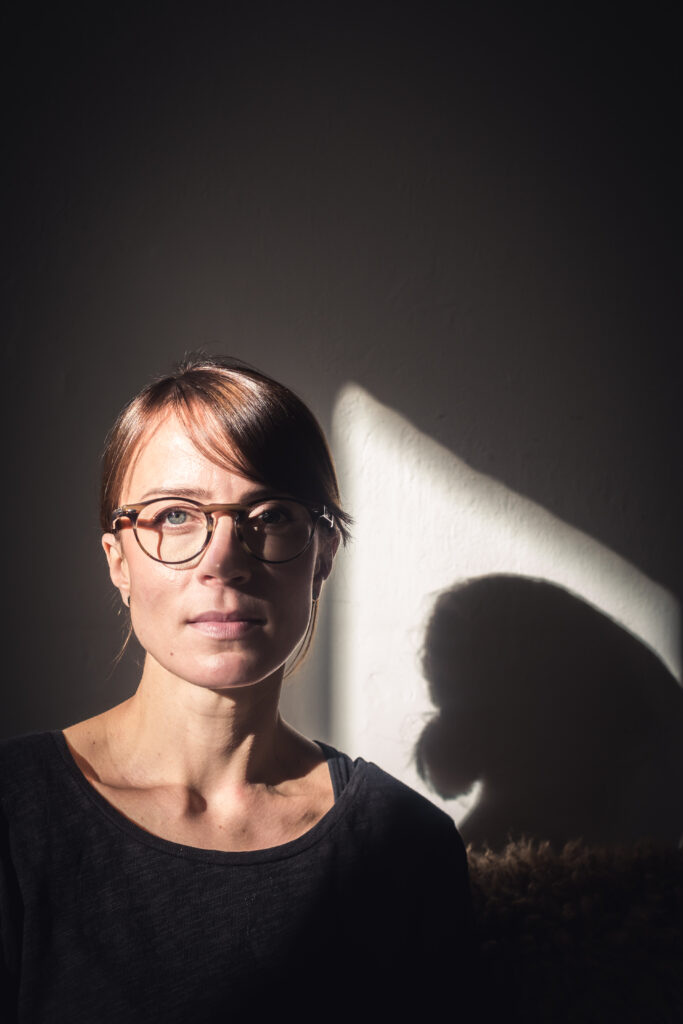 You mentioned that you hope to work directly with textiles one day. How else would you like to expand the scope of your practice?

In general, I would like to collaborate with other designers, as when I worked with Salla and Wesley. I feel that there are many opportunities and I’m sure that we will do something together in the near future. It’s also nice to work with others because I mostly work alone. Working with other people means that you can share ideas, but also that you don’t have to take sole responsibility. I’m not sure I know what my dreams are yet, but I do hope to be able to do textile and surface design, as well as challenge myself and work abroad.

Even though everyone in this series really dislikes being asked this question, I wonder whether you see your work as part of a Finnish design tradition or aesthetic?

There must be something Finnish in my work. You are so used to it, but when you have something to compare, it’s easier to recognise. For example, in Italy, I feel so Scandinavian! Even though I work with patterns, there’s a simplicity and functional approach, not to mention a very Finnish work ethic, that maybe reflects a Finnish design tradition.

Now Reading Weekly Studio: Reeta Ek
Read Next Weekly Tips: What to do in October