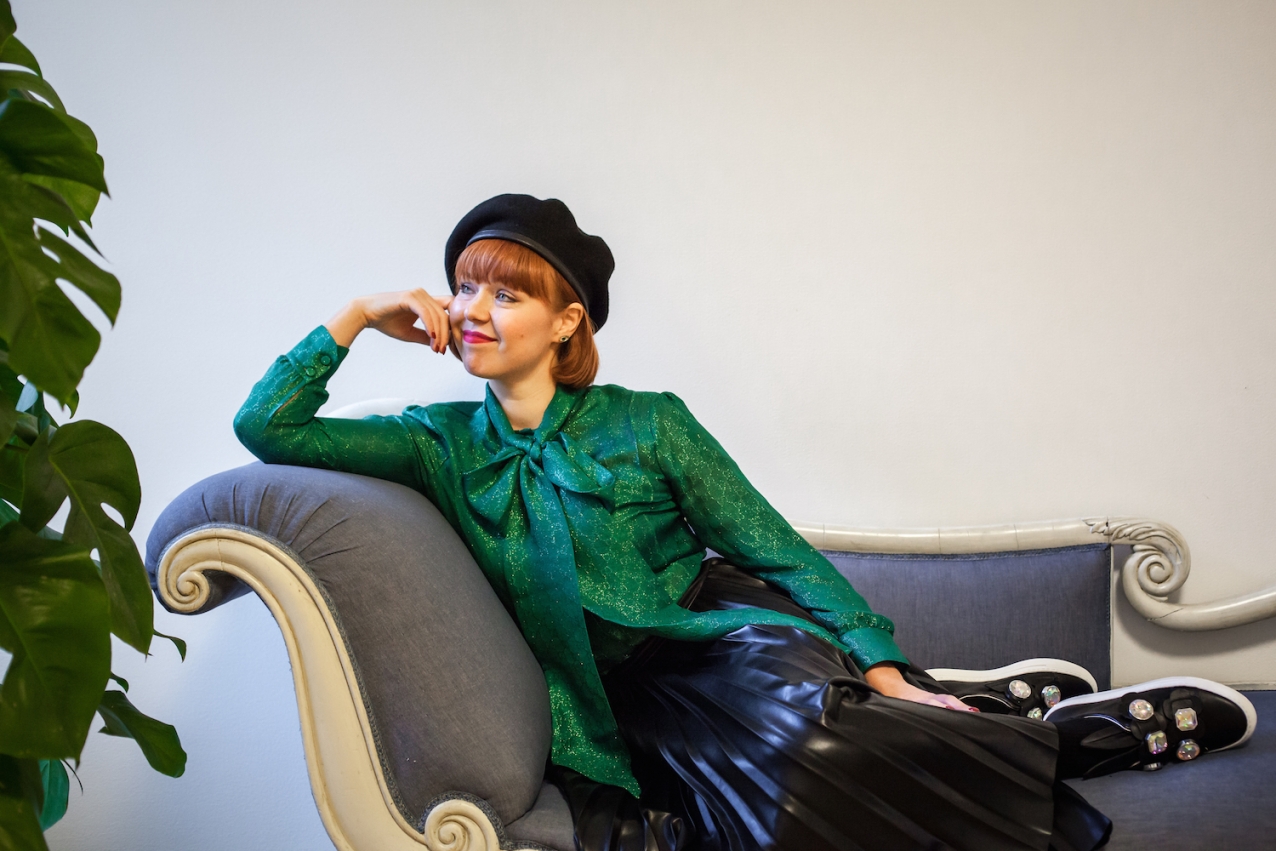 Designer Minna Parikka, known for her bunny ear shoes, encourages women to be a bit wild and works in her pyjamas. Writer Crystal Bennes presents on Weekly Studio interesting studios and their owners.

Although I imagine most people who read are already familiar with your story, could you give a brief overview of your background?

My teenage dream was to become a shoe designer – my sister wrote an article about the shoe designer Andrea Pfister for a women’s magazine in Helsinki. I read the article and thought, ‘OMG, I want to do that when I’m older.’ At 19, I moved to the UK to study shoe design. I stayed altogether five years in the UK, working for a few different brands. Then, I worked in Milan and Barcelona before I got really homesick and decided that I need to move back to Helsinki. There weren’t very many shoe brands to work for, so when I returned I started up my own company.

What in particular were you homesick for? Family and friends? Or cultural things?

What was it about shoes that attracted your interest, rather than clothing?

Of course, I enjoy clothing as a consumer. I love shopping and I love following what’s happening with the more established fashion houses as well as up-and-coming brands. From a very early age, I thought that I would love to work in either fashion or product design. But shoes are more independent objects than clothes. It’s a marriage between fashion and product design; it’s something more independent, more three-dimensional. They don’t necessarily need a human body to wear them to be attractive and they give such a kick to the wearer.

They can have a very sculptural quality.

Yes, exactly. And in my designs, I use a lot of details and colours which are quite toy-like, which emphasises even more the sense of them as an object. 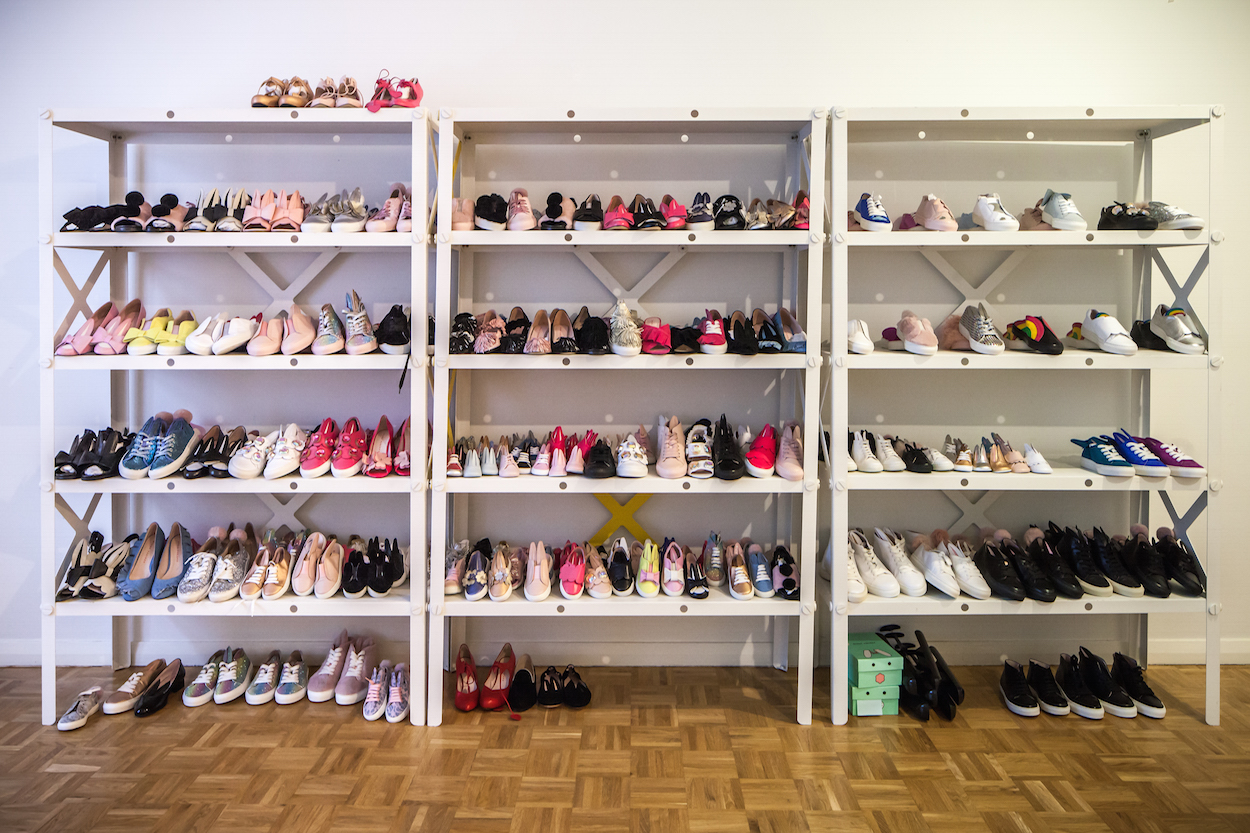 You started the business ten years ago, is that right? Do you think of yourself as much of a businesswoman or entrepreneur as a designer?

The business will actually be twelve years old this year, and both of the aspects are important to me. I get bored very easily and, when I was working for others, I felt that the design element alone wasn’t enough. I wanted to do other things than sit beside the drawing board. So, it suits my personality to have many roles to play.

I’m the only person who designs Minna Parikka shoes, but I’m also the owner. I own 100% of the brand. There are a lot of things to do with running the brand and running the business which I do enjoy even though they aren’t things which I studied. It happened more by accident. But, I do enjoy being busy and having the freedom to travel and to decide for myself what my life will be. And it’s been having my own business which has made that possible, because I would have been just another designer for someone else and I would never have had these possibilities.

On behalf of my Minna Parikka-shoe-loving husband (and all other interested men out there), why did you decide to diversify into a children’s line, rather than mens’?

We actually have a lot of men coming to our shop asking for the men’s collection. We hear the message constantly! But the brand is so girly. My style is so feminine and fun with lots and lots of details, and you can’t really do any of that with menswear. I think I would get bored so quickly if I tried to do menswear.

The children’s line we launched last year is more of a natural variation of the collection. It’s a mini-me version of the adult shoes, which makes more sense and has already been very successful since we launched that line at Harrods in April, 2016 as a pop-up.

As you said, you’re the only person who works on shoe design for the brand. But I also know that you have collaborated with other creatives on your window displays or your website. Is maintaining sole control of the design identity something really important to you or more of an accident?

Actually, my New Year’s resolution was to look for another designer and another visual person to take on more of the visual branding. I’m also in charge of the visual identity, all the styling and photoshoots, so really I’m looking for another Minna Parikka. But I’m also hoping to find somebody who can bring something new to the table. Since I’ve been doing it alone for so long, I think it’s time to move on and take other creatives on board.

But the impetus to take on another creative designer is more related to the workload rather than a change in direction?

Yes. My brand has grown so much in recent years. We’re now doing mid-season collections, plus children, which means I’m doing eight collections per year. And that doesn’t include everything related to visual identity as well… 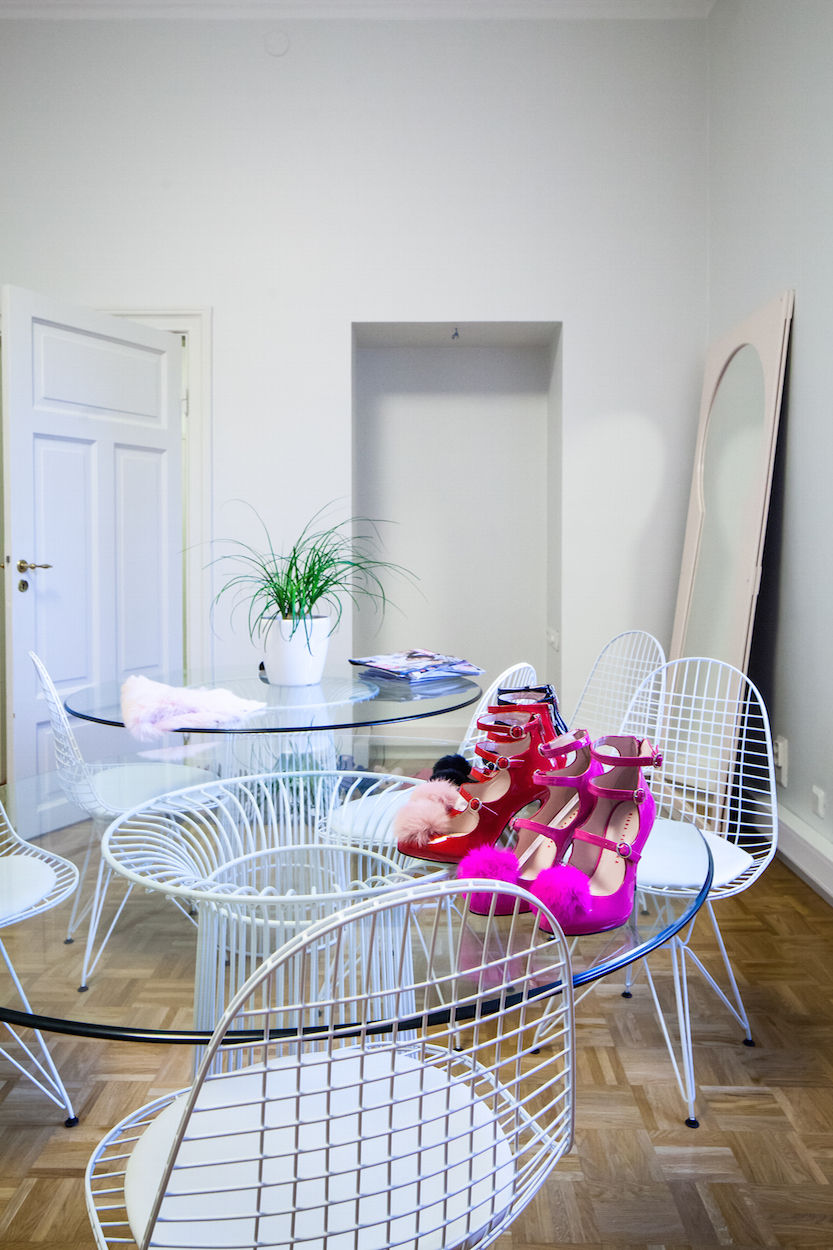 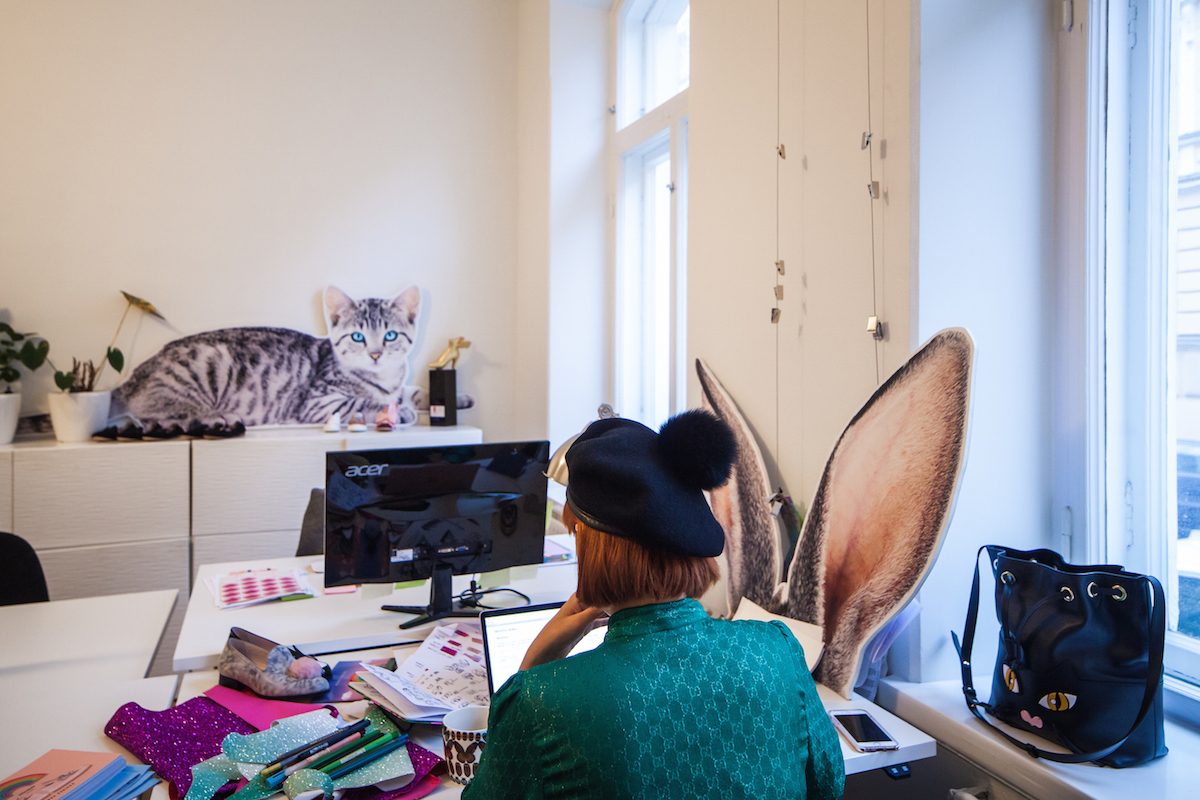 “I think that Finnish women

want someone to allow them

to be a little bit wild.” 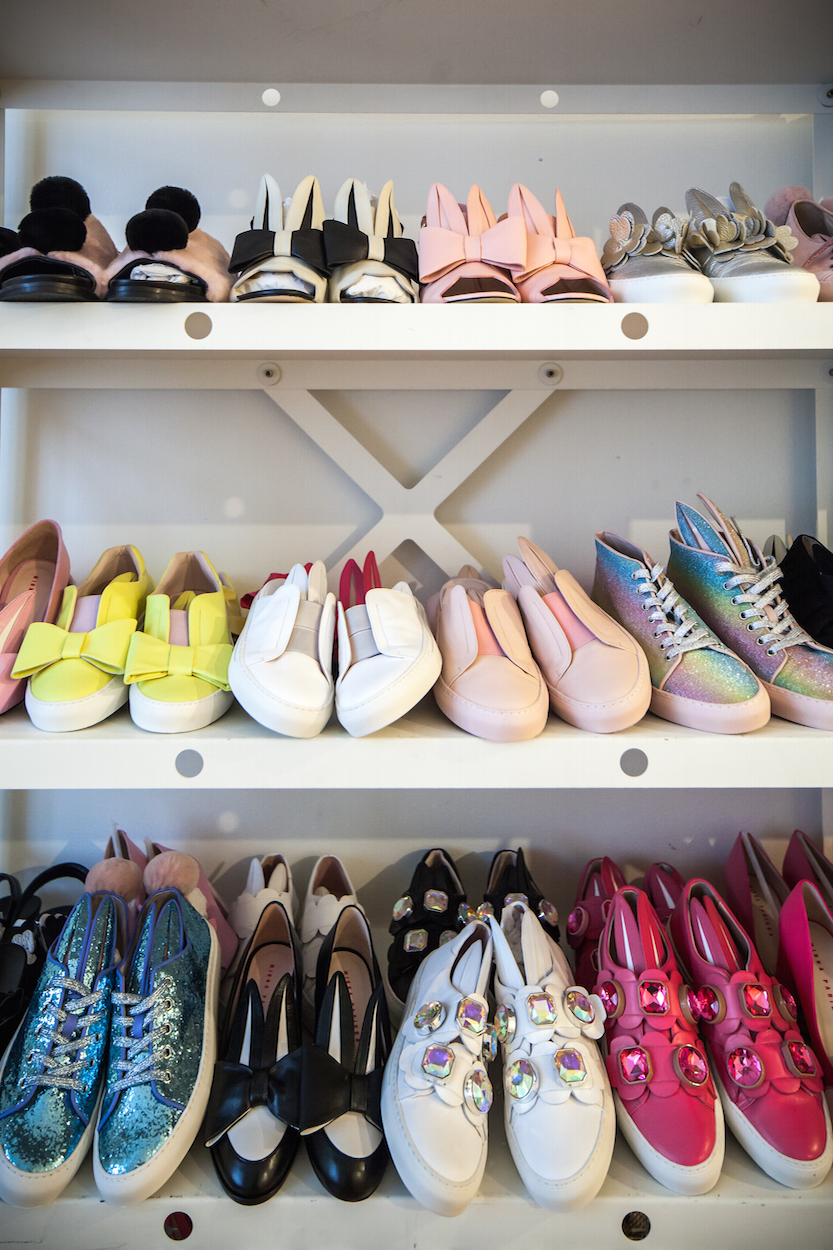 Quite a few other designers I’ve interviewed for this series also operate out of a live/work space, but you have your main shop on Aleksanterinkatu, plus a business office in town, and then your apartment where you do most of your design work? Why is it important for your design space to be your private space?

As a creative, it’s difficult to assign yourself regular working hours. To say, ‘Ok, I’ll go to the office at nine,’ but then if I don’t feel like drawing at 9am when I get to the office, it’s not the most productive way to organise my time. For me, it’s much easier if my workspace is in the same place as my home. When it’s time for me to do the new collection, I get up early, go to the drawing board and there’s a good chance that I’ll still be there in the afternoon, still in my pyjamas. So far, it’s suited me well. Of course, if I take on another designer, they’re not going to be there with me in my apartment both wearing pyjamas…

For me, it’s really important that I get to be in a calm environment, in my own space, when I create. In my home studio, no one bothers me. I don’t have to check messages; I don’t get interrupted. I can go crazy for five days. I stay inside, order food delivered. Basically, I stay there working until I go a bit nuts. When you do the creative process entirely on your own, you have to be both your biggest cheerleader and your strongest critic. That’s what I mean by going a bit nuts.

And is it important that your design studio space has a certain aesthetic?

Yes, absolutely. At home, I just have to look at the walls and it makes me think, ‘Oh, what a beautiful shade of pink!’ I’m a visual person and I live through my eyes. And I have to say, my house is a lot more beautiful than our office which is filled with shoes, suitcases and cardboard boxes. At the moment, when it’s such a busy time of the year, it’s just chaos, and I find it too difficult to concentrate in that kind of environment.

I know that you like to travel and that you derive much inspiration from your travels, but, in line with what you said about it being very productive and easy to live in Helsinki because it’s very relaxed, I wonder if you could expand a little on the importance of that balance?

It’s such a key thing for me. I really enjoy that I get to go to interesting places and lovely restaurants and cafes. That I get to go look at all the luxury shops and department stores and see what brands they stock and what my competitors are doing. To go to museums, or on adventures, snowmobiling, whatever…something that creates emotion is really important to me.

And then I can return to Helsinki and, at that moment when I need to do the actual design work, I can lock myself away at home or in the office and bring those experiences into my work. Even though I enjoy the big cities, especially because that’s where the fashion industries are, I would not like to live full-time in those kind of environments because I would become too confused. I think it’s much better to go, see and experience and then come back home to think about everything. 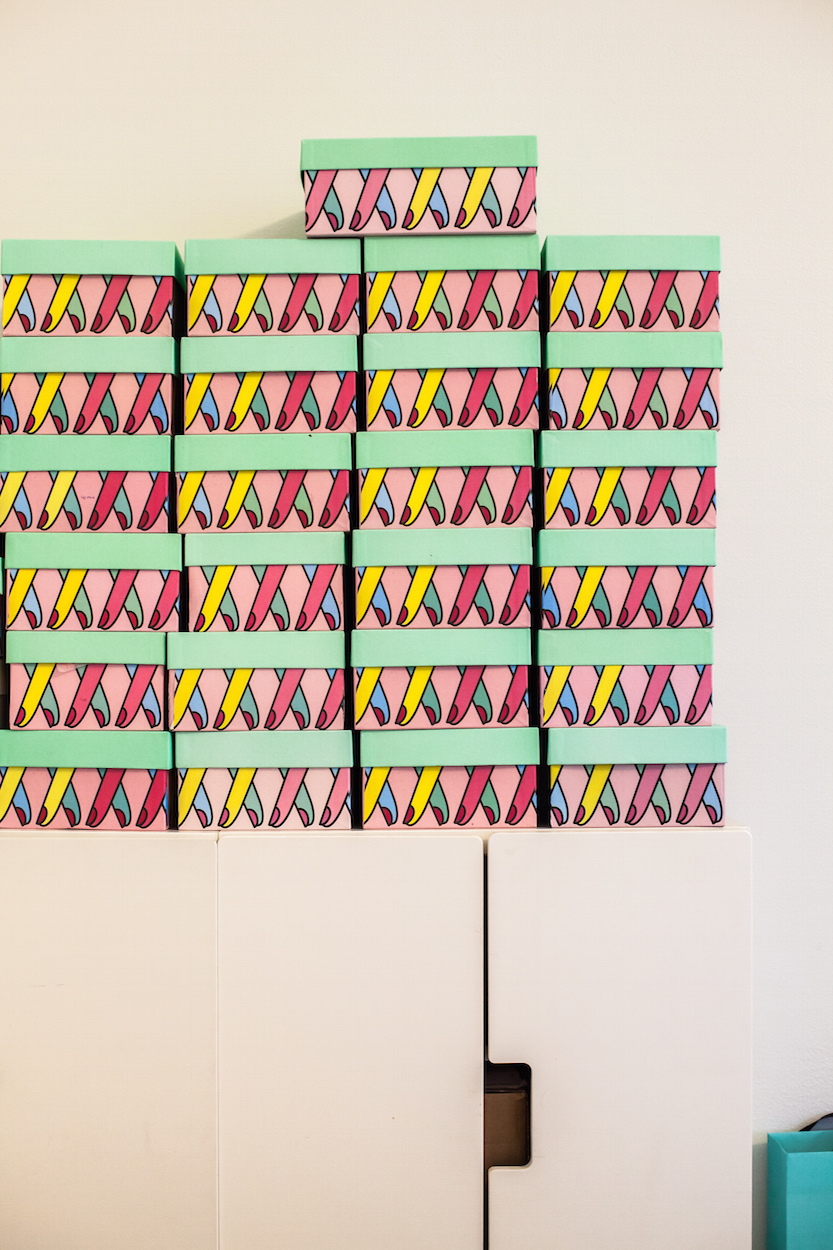 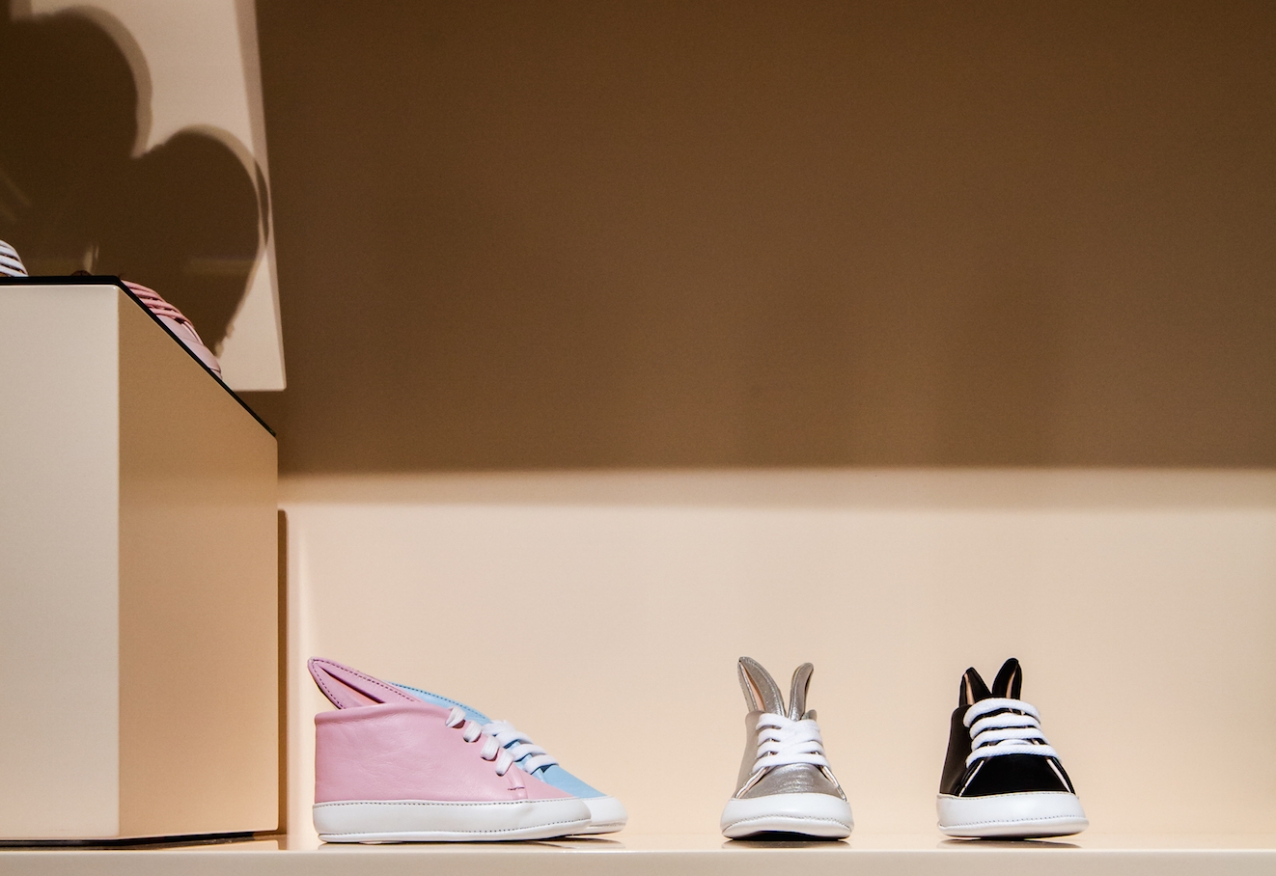 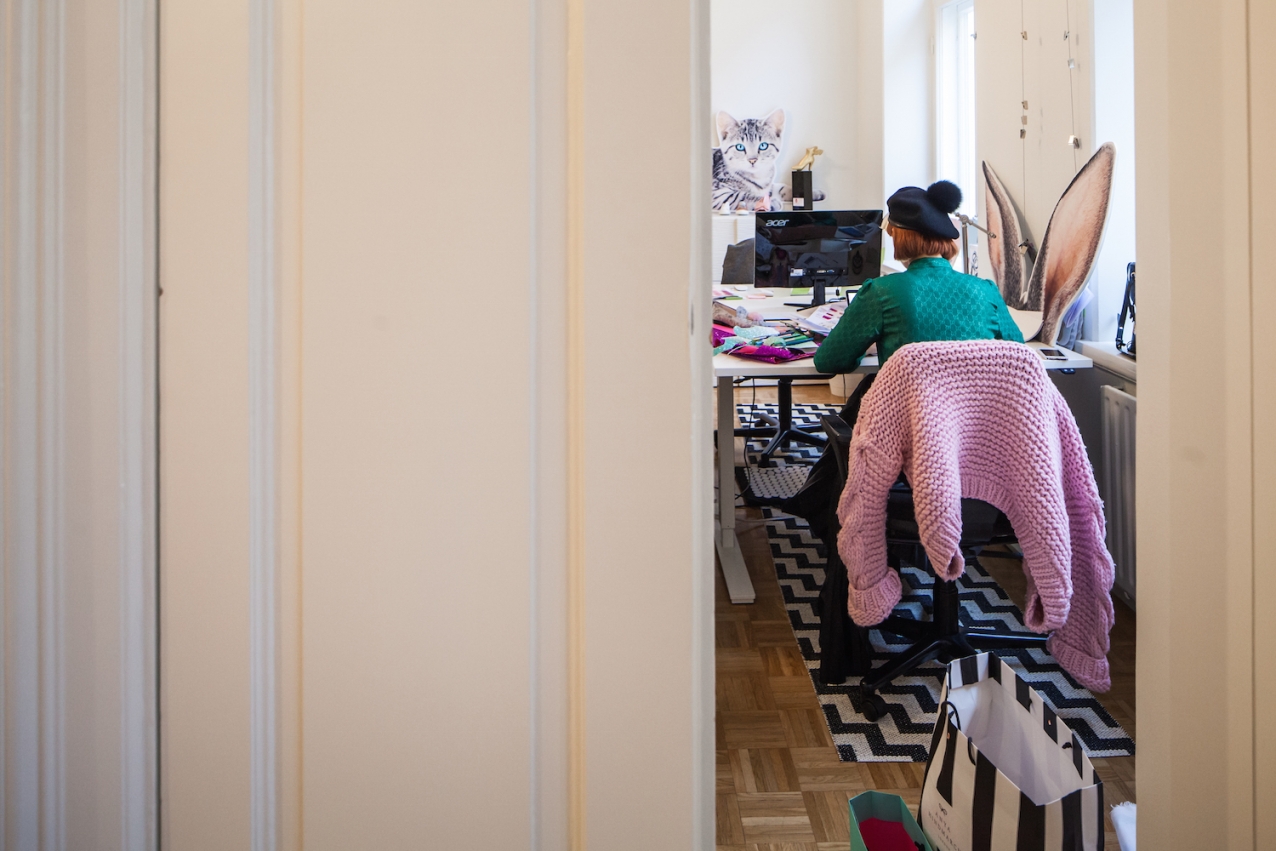 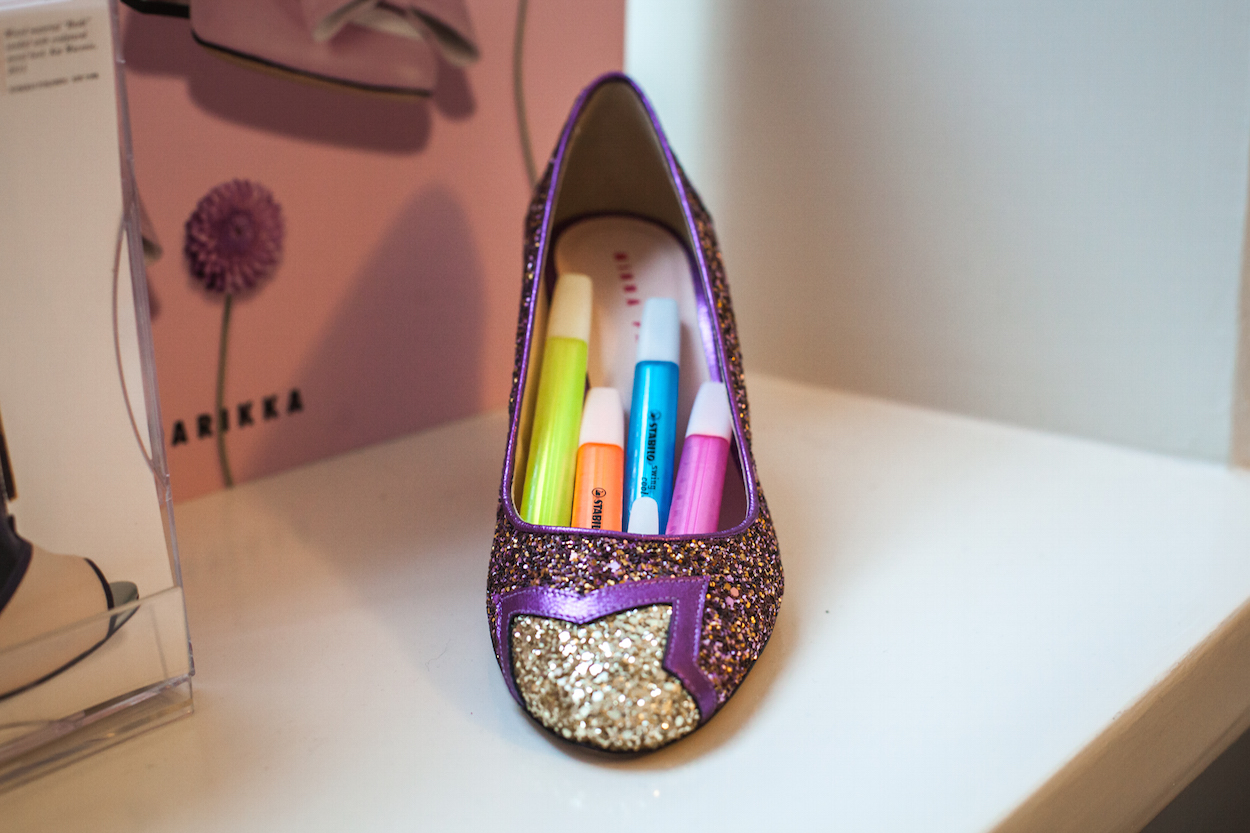 Do you see your work as particularly Finnish, or part of a Finnish aesthetic tradition?

I don’t draw on any Finnish influence. I don’t think it’s a good starting point to be bound to your heritage when you start to design. I think it’s much more important to look at design and fashion on a global level. I think that’s really the only way you can compete on a global level. I actually think that’s a key factor as to why we have such great stockists worldwide. I don’t think stores like Harrods and Selfridges would have been interested in something that only related to a specific heritage. They’re looking for something that suits many cultures and I think it’s the ability to appeal globally, rather than just locally, that has been a big part of the brand’s success.

I’ve read previously that you think of your style as being quite contrary to Finnish style, but I actually get the impression that there’s a lot of boldness in Finnish fashion, even perhaps if the stereotype of Finns as quiet, introverts persists.

That’s an interesting point. I guess if you think about Marimekko, the Finnish fashion brand which is the best-known brand, most foreigners think it’s totally bonkers, so perhaps we do have a heritage of clothing that’s quite forward-thinking…

Although it makes me think of Hel Looks. Before I moved to Helsinki, I thought everyone here dressed like the people in that blog, like completely crazy. And then when I moved here I was like: where are all these crazy-fashion people hiding?

Well, there are a lot of different styles here. The general public don’t usually spend a lot of money on their clothing and they don’t really wear brands as such. I think it is a very small percentage of people who buy brands.

But I also think that Finnish women are quite expressive, or at least they want to be more expressive. I think that’s been one of the reasons for our success here in Finland, because shoes are such an easy way to be expressive. Because they are a small part of an outfit, there’s the sense that you can dress quite low-key and then go all-out with shoes.

I see older women walking around in bunny shoes, so I think women in Finland are quite expressive.

But I think that they also like being pushed a little bit, they want someone to allow them to be a little bit wild. 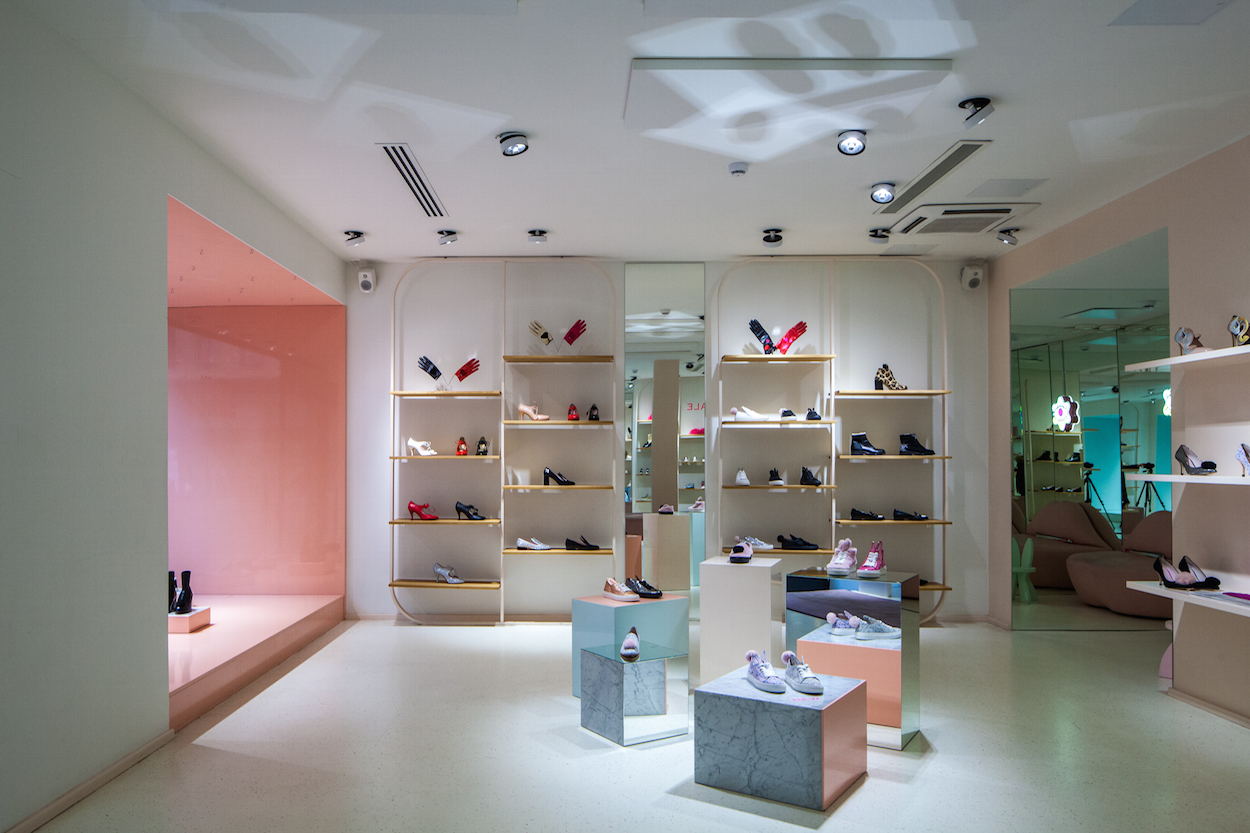 Now Reading Weekly Studio: Minna Parikka
Read Next Weekly Tips: What to do in February