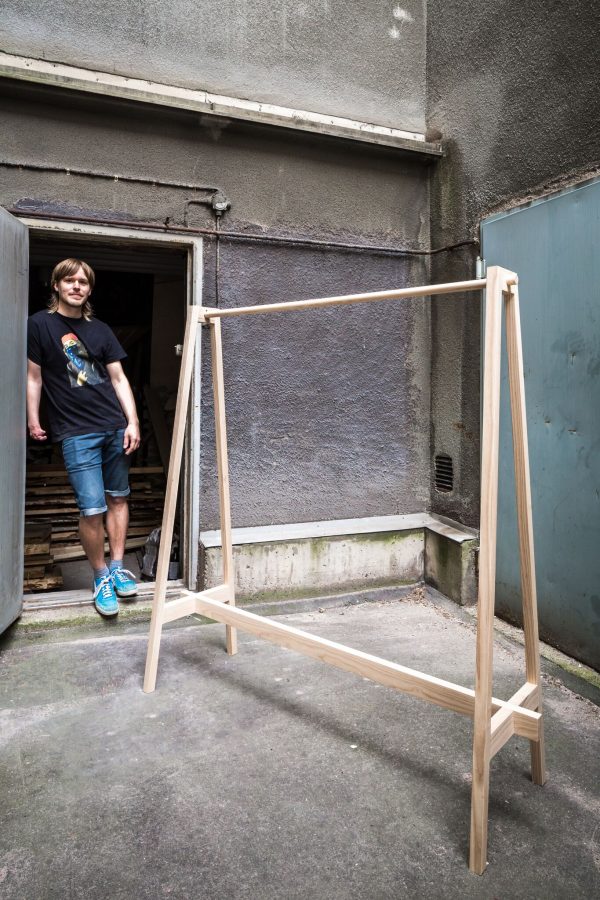 Your background is interesting, in that you trained both as a carpenter and as a furniture designer.

Yes, I originally trained as a carpenter. I graduated in 2010. This is what I consider to be my professional background and where I make most of my money. I also studied art and movie making and graphic design. Actually, my initial idea after high school was to become a graphic designer, but I was never accepted to any of the schools…

But then you later studied furniture design at Aalto?

Technically, I am still on the programme, the Bachelor of Spatial and Furniture Design, but I have been on a break for the last year. Prior to that I spent nine months in Berlin on exchange.

How did your educational experience in Berlin compare to Finland?

Mainly, I found it easier to focus on my work. There wasn’t anything apart from studies, so I could focus on the coursework. In Helsinki, I usually have work projects as well so it’s a constant balance between work and studies.

Do you think that the time in Berlin pushed you in a new direction? Or did it mostly consolidate what you were already doing?

A bit of both. I made a decision to try something new while in Berlin, so I worked with ceramics. I was in a new place, so it made sense to try a new challenge. 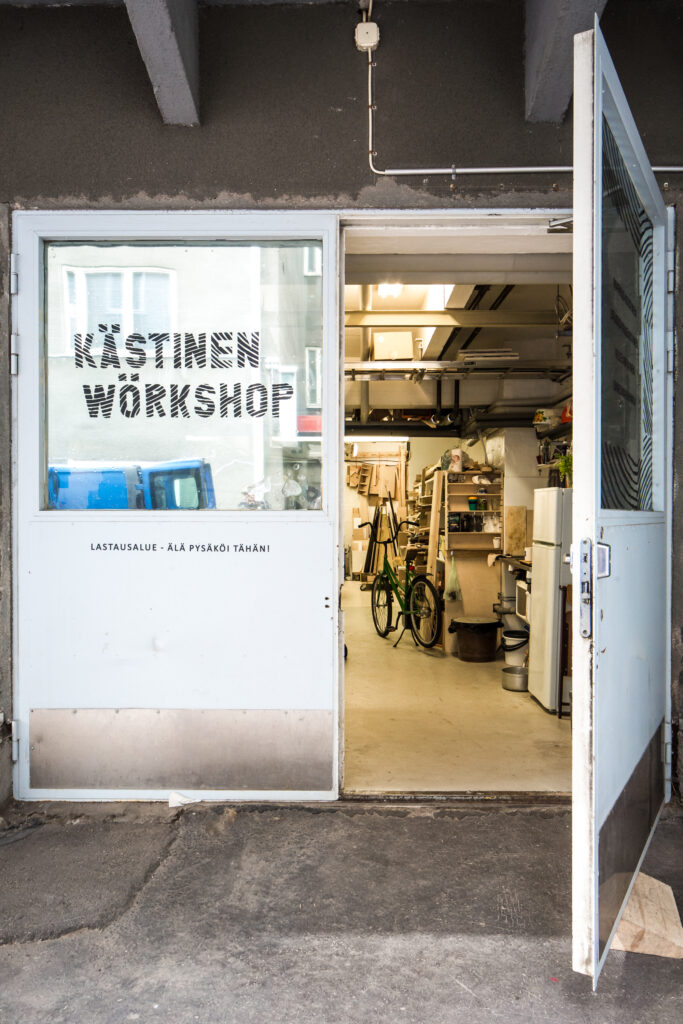 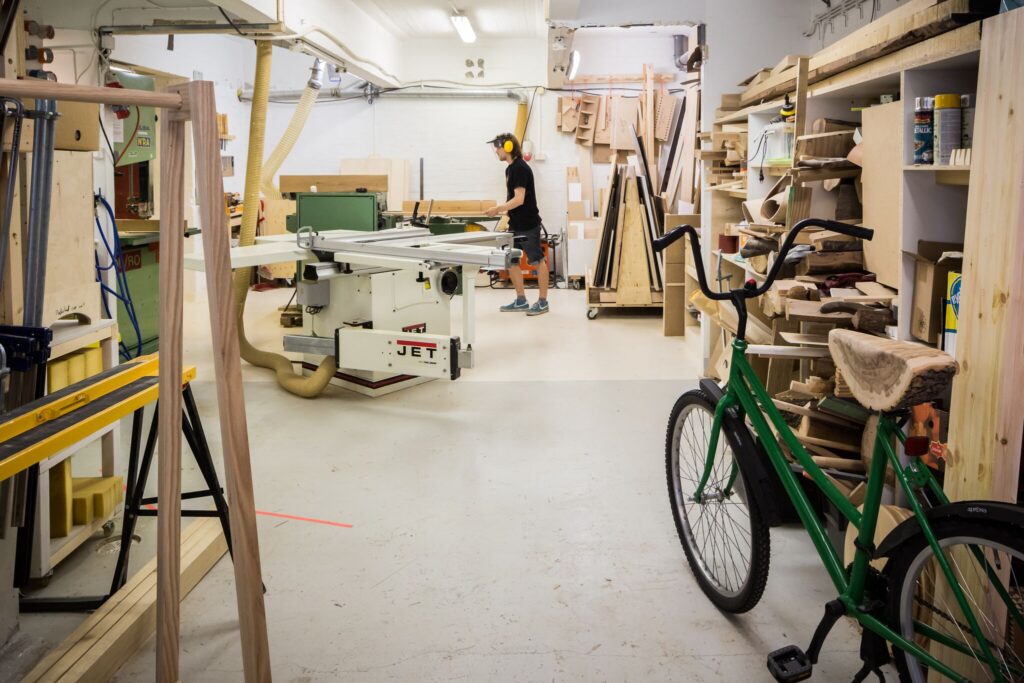 Are you continuing to work in ceramics?

I would like to, but It takes a long time to get into a ceramic project. In Berlin, I found I was able to try something more artistic and less functional which was liberating.

Did that feeling of liberation stay with you when you came back?

I would say that some of the mentality remained, but I did always have artistic intentions. My work is mostly functional, so I have always tried to keep the two separate. Somehow, it works better for me to have pure art and pure function projects separately.

It’s something I started after graduating from carpentry school. I wanted to have a space to continue working with wood. As part of our studies, we were required to do three different internships. I did one in a traditional wood workshop, one at the Aalto wood workshop – that’s where I was introduced to the design side, saw students working on prototypes and thought that this was something I wanted to do – and the last making prototypes for a design office.

From these experiences, I couldn’t see myself working in a traditional workshop making kitchen cabinets or doing renovations. I’m the kind of guy who just wants to stay and work in the workshop and I found it was mostly the smaller scale, furniture and objects, that I preferred. The connections from my internships led to many of the prototypes I now do for other designers and that was also how I later ended up studying at Aalto. I see Kästinen Wörkshop as a platform for combining all of those experiences. 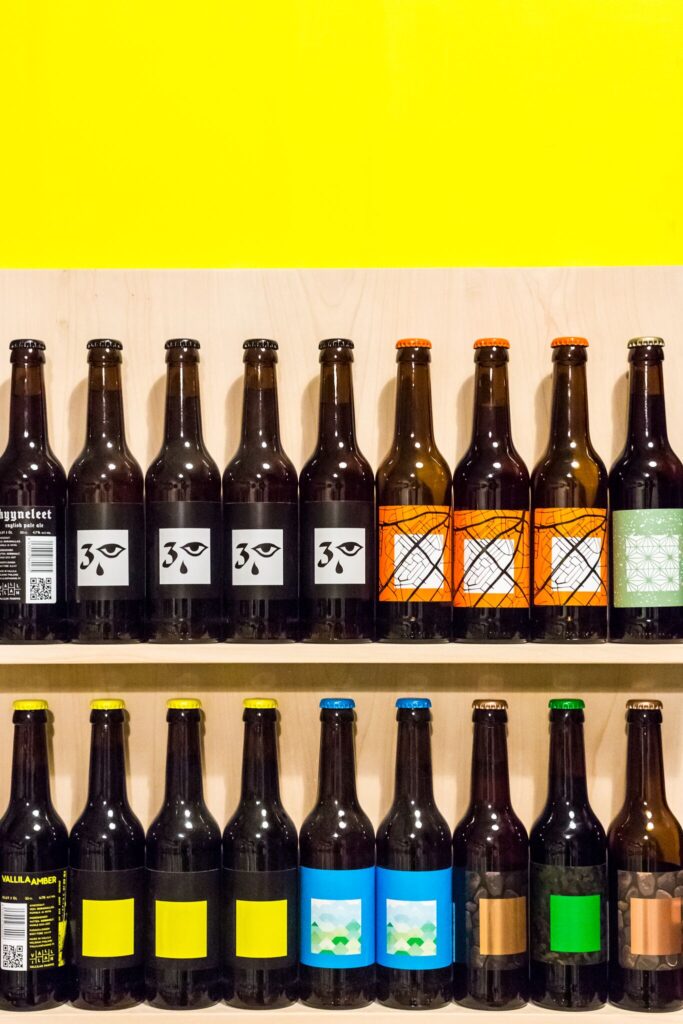 So, the majority of what you do in the workshop is make prototypes for other designers?

Yes, as well as installations for other artists. I also develop my own projects, or occasionally, I need to design furniture for someone which then turns out to be something that I want to keep working on. Typically, I get sent a brief and then I come up with a solution. There are also more artistic projects, which are essentially just crazy ideas that I want to try out. I try to make time for artistic work when I can.

I’m interested in the sound properties of various materials. The project “Dancer Vase” that I did in Berlin was actually a sound and ceramics project where I created a series of vases that make different sounds. I tried to work like a caveman turning an everyday object into an instrument and I taught myself how to play the objects as instruments.

But, it doesn’t have to be as focused as that. Sometimes it’s just playing around, just cutting wood and you find that when you cut wood in a certain way it looks beautiful. With wood, if you let it guide you, it drives the work. There’s a soul to natural materials and if you look or listen, the material will tell you how it should be used. There is always a way that the material wants to be. 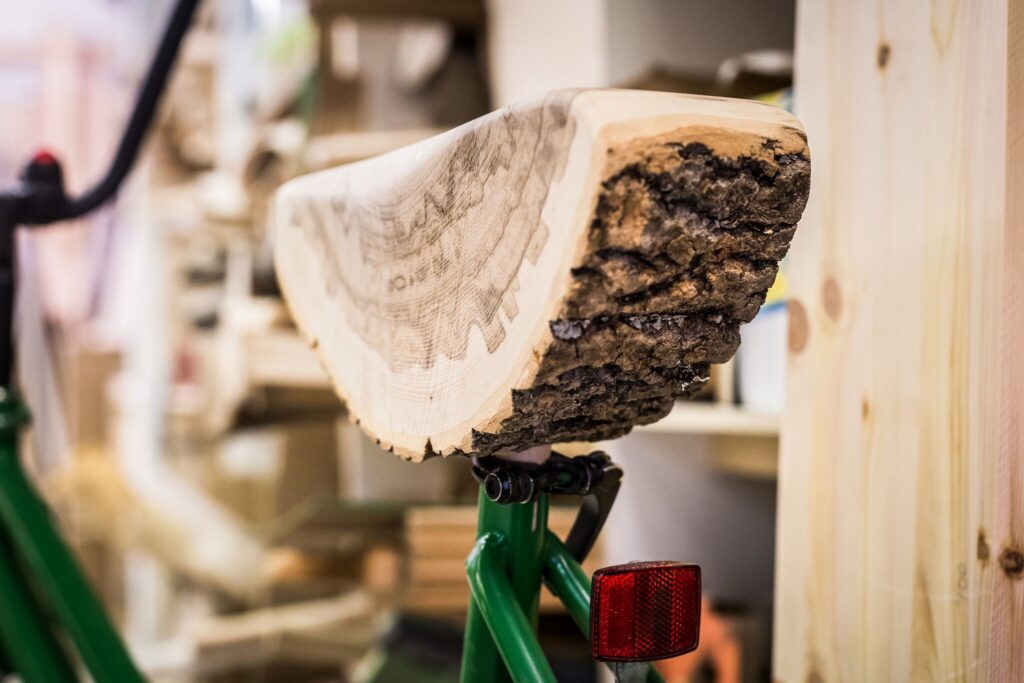 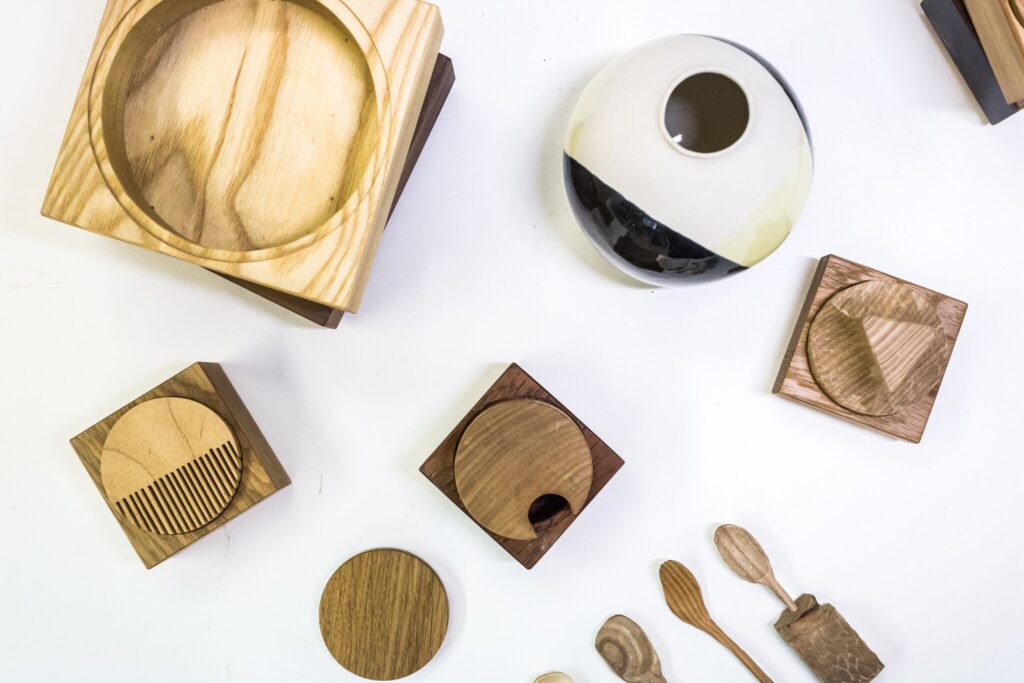 Yes, we are six in total. Initially, it was just myself and Ville Arpiainen, but when we got a bigger space we took on two more and then two more. No one works there full time, though. Everyone has other things going on, whether their studies or day jobs. It’s more like a platform where people can work on personal or customer projects. It’s a nice atmosphere because there are different people coming and going.

And what’s the history of the workshop space?

It’s in the Vallila neighbourhood, in an area with other artist studios and wood workshops, places that make noise and mess. It’s a small industrial area within a residential area, but it has a long history. The building was an old pharmaceutical plant dating from 1935. The company left the building in 80s or 90s and now it’s mostly artists and studios. Our space is 120sqm and we have big doors opening on to the courtyard. It actually used to be a metal workshop when it was the pharmaceutical plant.

Given that you make a lot of prototypes for other designers, I’m wondering how that process unfolds. Is it a negotiation? Or do you make exactly to order?

Usually the  client gives me drawings and I make according to the drawings. There may be joints or certain things I can comment on, but if I’m doing a prototype for a designer I think that they want to see it as drawn and I don’t want to push it in another direction. I provide my expertise and they can make their own decisions. That’s why they come to me because I can realise their crazy ideas, even if they don’t work.

Do you find it difficult to balance working on other people’s projects with your own?

I don’t have much of a problem keeping things separated. In a way it’s also very liberating. I’ve seen so many different projects and ideas that I don’t have to make them myself. That makes things easier for me somehow in that I don’t have to try out every idea. As I said, I try to have two different directions, one more functional and one more artistic. In terms of the functional projects, I usually make simple furniture. My style in general is quite simple. 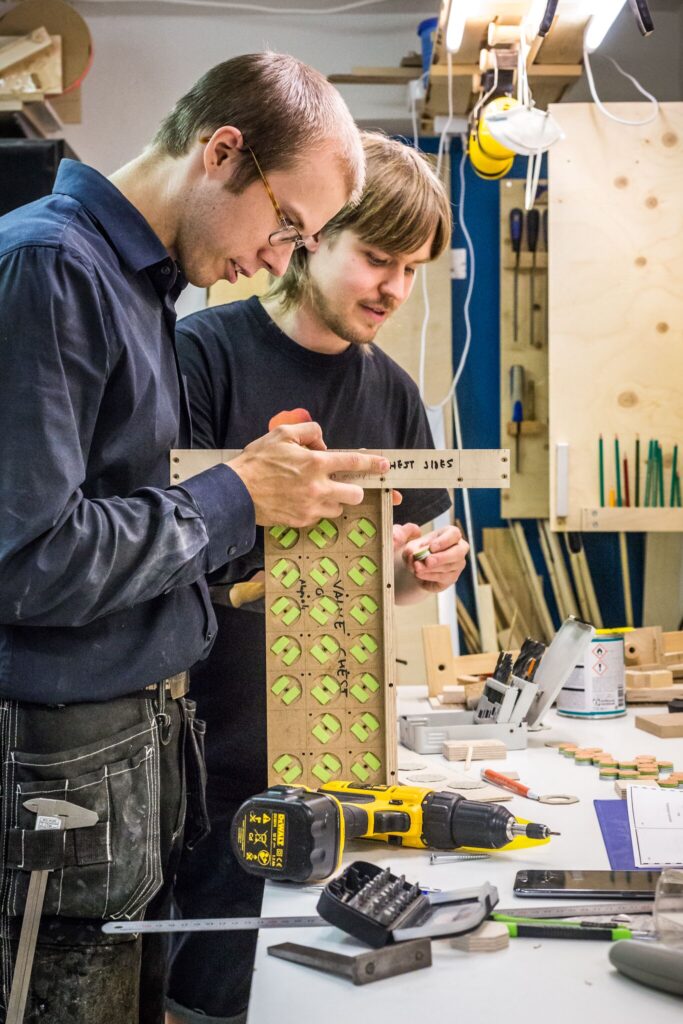 What functional projects have you been working on recently?

I’m currently working on a collapsible coat rack and wooden luggage. I find myself doing a lot of racks and containers, organizational things. My way of working isn’t to design a chair for no reason. I need to first have a problem and then try to solve it.

In addition to your wood projects, you also do the graphic design for the Vallilan Panimo brewery. How did that come about? https://www.vallilanpanimo.fi/

It’s actually a natural continuation of the workshop story as the brewery used to be in the space where Kästinen is now. When they started the business we were neighbours and I noticed that they were making beer and it seemed natural to introduce myself and find out more about what they were doing. Later, I learned that they needed help with their graphics and now I’m part owner of the company.

And how did you approach the process of designing things like labels before the product was even ready?

Similarly to how I approach my wood projects. You have the problem of designing a product that would sell and look good and the designs are the solution to that problem. They already had a few ideas, but they weren’t very developed. I went with a very minimal aesthetic and combined that with a local vibe which we want to use to promote the products.

Do you find that the graphic design and wood work are complementary?

I think it’s all the same task, fundamentally – solving problems. It’s about the basic principles of art and how the eye and the ear works and how you work with contrasts, these can be applied across all kinds of formats. 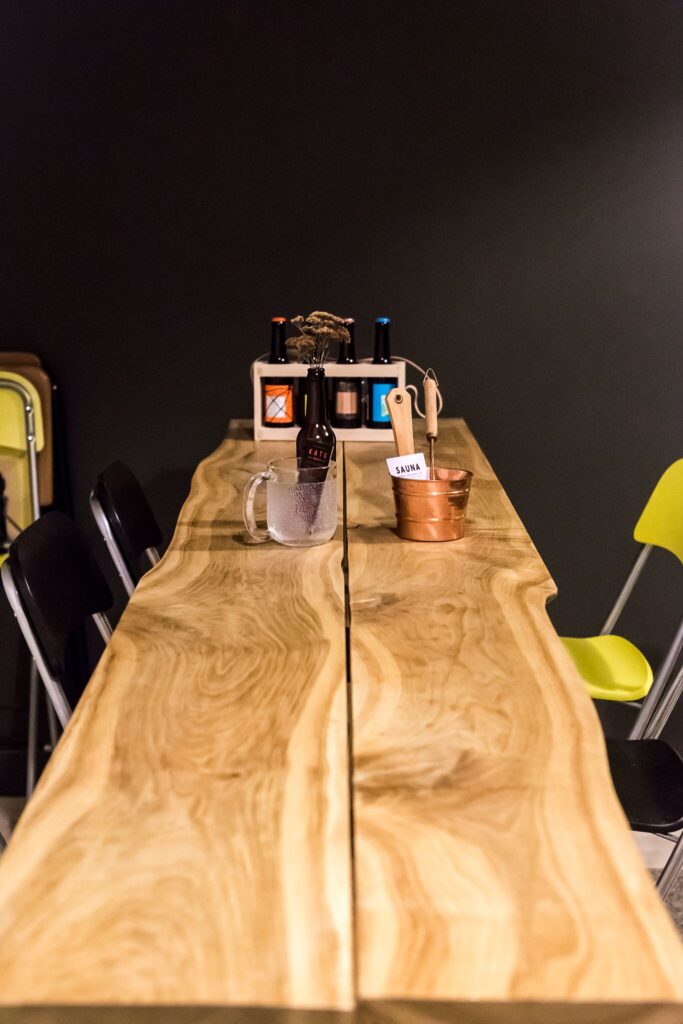 Working across multiple disciplines and projects and formats seems to be the way of the world for young designers now? I suppose it’s partly economics, but then a lot of people are interested in pushing the boundaries.

I think that’s how design is these days. In some fields –like graphic design – you can find permanent jobs . Or you can be a 3D modeler in an architectural company. But if you want to be doing more creative design, then you have to have a wider spectrum of what you can offer. You have to be able to pick up different kinds of projects and apply your own methods.

But is it financially feasible to work like this in Helsinki?

It’s difficult, but as a carpenter, I’m confident that there will always be work. When I was in Berlin it was obvious that it is not easy to find paying jobs. There were many projects happening, but no money. It’s a cheap place to live so it’s less of a problem, but in Helsinki, it’s generally easier to find paying customers. 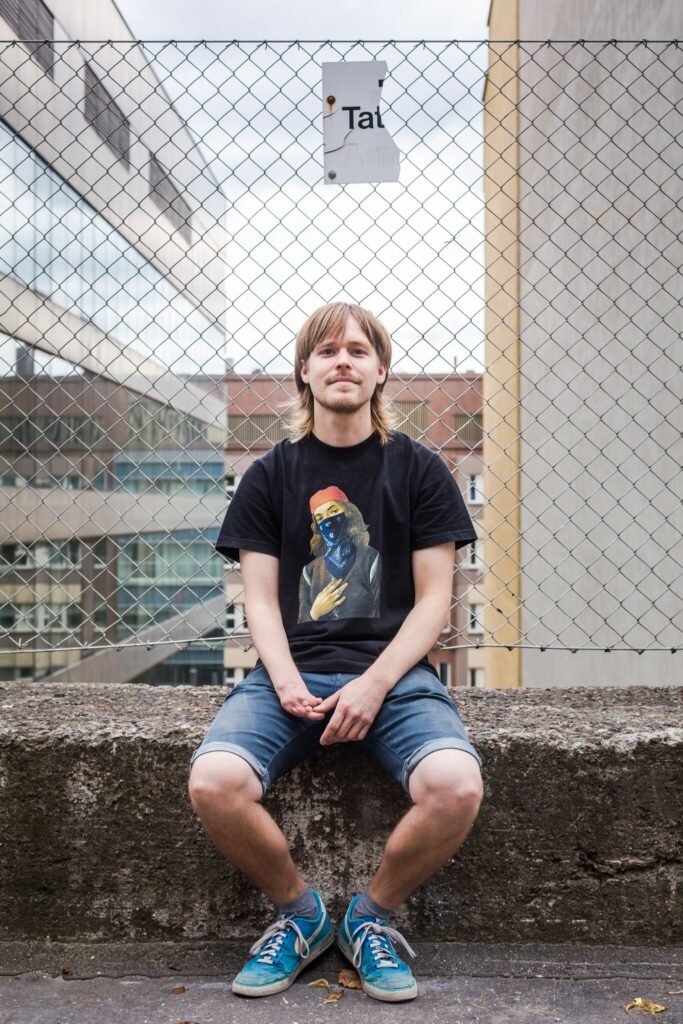 What are your future plans for the workshop and your personal work?

I would like to see the workshop more established. I’d also like to display our own projects in artistic manner. I’m not a big fan of exhibitions, but I’d like to find a good way to represent our work as a community. People are aware we exist, but we have to push a little bit more I think. I want to grow organically and monetize to some degree, but I’m not entirely sure how that will happen. I need to give it time. We have a good community and a good atmosphere and I think those things we enable us to go forward in the right direction.

I don’t know. They are so temporary. It’s often a lot of wasted effort. It comes from my background of seeing too many art projects. You make work for an exhibition and then it just gets stored away somewhere. That’s why I like furniture and functional design, because you can use it and it doesn’t get shut away after it’s made. I think it would be nice to organize happenings, a way to give something to people.  An art exhibition is to ask people to come and enjoy your work. But I prefer to think of it the other way around, so that people could come and enjoy themselves instead.