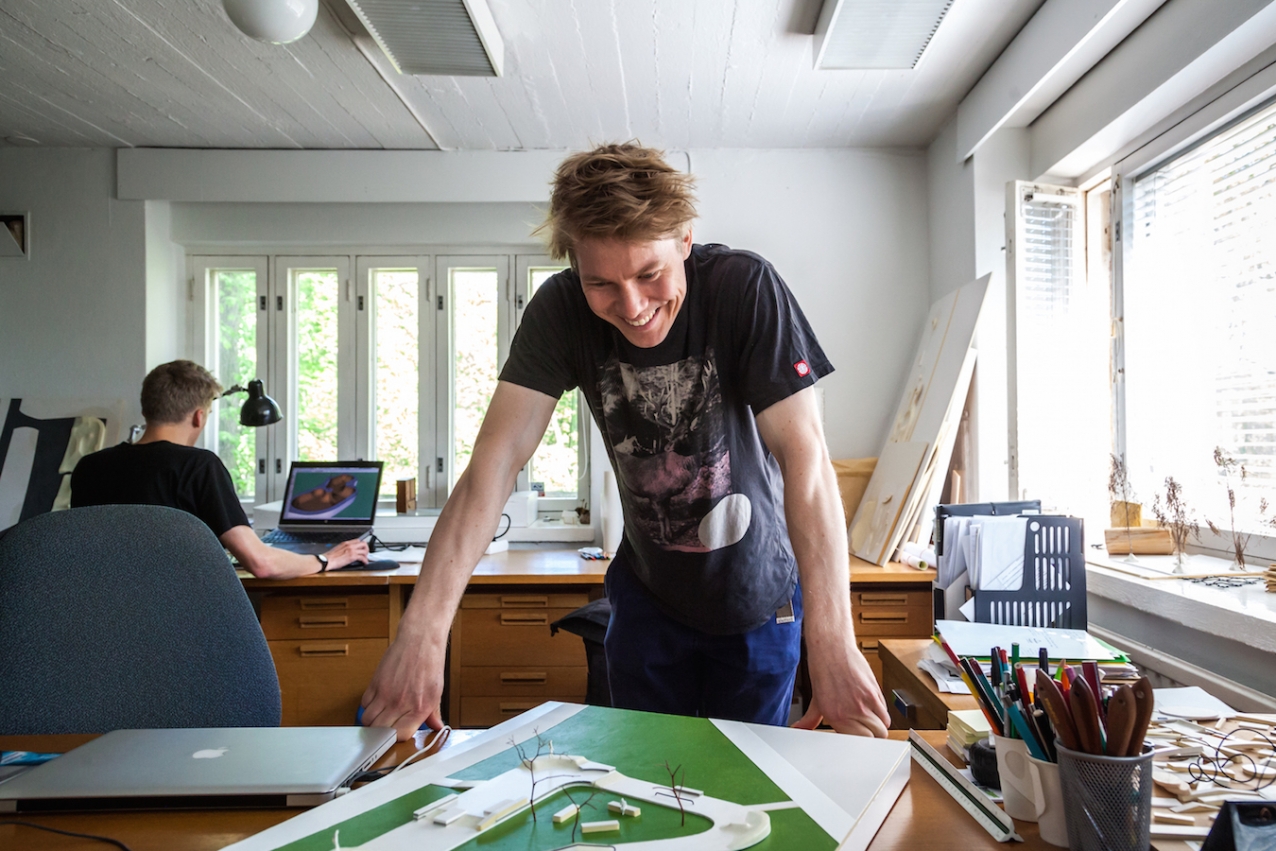 In our seventh Weekly Studio, we meet skateboarder-turned-landscape architect Janne Saario in his Niemenmäki studio. We chat about investing in youth culture, making space for nature in skatepark design and why Helsinki shouldn’t try to imitate global capital cities. And check out one of his skateparks in action.

How did you get into designing skateparks?

I fell in love with skateboarding when I was six and since then I’ve always had my skateboard with me. There weren’t any skateparks in our neighbourhoods – in the north part of Helsinki, where I grew up – so we skated what was available. They weren’t spaces designed for skateboarding, so we learned to modify our technique, use some imagination and build our own stuff to skate on. When got older, we went to the centre of Helsinki to skate the streets and film skate videos.

I got noticed by Samuli “Hessu” Heino, one of the main players of skateboarding in the city [one of the founders of Control Skateboards], and he hooked me up with a skate shop for sponsorship. A couple of years later, Hessu went to work for Element Europe. He asked me to send a video and then I got sponsored by Element. All of a sudden, they’re sending me boards, shoes, plane tickets.

And how old were you then?

18. I was still living at my parents’ place and DHL would come every other month – it was like Christmas all the time. It was pretty crazy. I was traveling around the world, making skate videos with the team and getting to know other skaters from all over.

What were those environments like? Did you mostly film in skateparks, or city centres?

Skateparks were out of the question. They were thought to be these boring tracks where the municipalities tried to erase “the problem” of skaters from the streets. We thought that the streets were the real skate spots and that’s where we wanted to be.

So was it an ideological thing, born out of some sense of ownership, an idea that the city centre needs to be reclaimed for skateboarding.

I don’t think we really discussed it at the time, but looking back, for sure, there was a fundamental sense of that. I think it’s in the history of skateboarding, anyway. It was created and evolved in urban spaces.

Something I’ve been wondering about is this relationship between the freedom, transgression and excitement of skating in the city and the challenge of designing skateparks. How do you keep from killing the very thing that makes it so fun to skate throughout the city when you put it into a park?  How do you negotiate that relationship?

So how do you bring that sense of discovery into your own designs for parks?

My first design was made when skateparks here were still quite boring. It’s the Micropolis in Eläintarha [Helsinki]. It’s made with many materials that imitate the city environment. There’s a lot of granite, concrete stones…

It’s that the design which has those grass corridors for rabbits?

Yes. At the time, I thought that the place needs to be something other than a skatepark. I didn’t think that anyone was going to want to skate in a park, so I thought about making something more like an environmental artwork.

So, that was when you were still studying.

I started my studies in the same year as the park was built. I was also working at Sami [Rintala] and Marco’s [Casagrande] office at the time.

They have a very unique approach, both to landscape and to architectural design. Do you think that working with them influenced the way you were thinking about landscape and design?

For sure. This conceptual approach – creating a concept and philosophy behind the design – that was something I learned from them.

Rather than an approach which privileges forms?

Exactly. The forms in Micropolis are a collage from all over the world. There are things from the Olympic gardens in Lausanne, Switzerland, and then tiny details from Barcelona. It’s a kind of travelling memo drawing on my own experiences.

How do you balance the demands and context of the site with this desire to make collages of places you’ve previously skated? Is the impulse there to put every idea into every design?

These days, skaters are really knowledgeable about skateparks. They’ve been waiting years to get their own park and they’ve watched loads of videos and they know what they want. When I do a workshop with the skaters at the beginning of the process, they already know what I’ve done and what kind of forms they want.

So like every city wants a Guggenheim Bilbao, every group of skaters wants a Micropolis?

It actually varies in every neighbourhood. Some want big ramps, some don’t. It depends on what kind of skating they’re into. Once I know what they want, I start to look at how to incorporate those forms into the landscape. And then there’s the feedback from the local authorities to consider. It’s always a mix of different needs.

Since these spaces are in the public eye, the public realm, how much are you thinking about the experience of non-skatepark users?

Yesterday we were at Järvenpää. There’s a garden space – which will eventually grow into an apple orchard – in the middle of the park, and other people – girlfriends, whoever – come and hang out there.

These skateparks are the main public spaces for young people and teenagers, simply because there are no other facilities, really. I remember people used to drink beers in playgrounds, just because there weren’t any other spaces. Now there are cool spaces for people to use and hang out.

In the city, it’s commercial and mostly targeted to adults. The skateparks I design have nice seating areas and trash cans and good views. In the skatepark, it can be more vibrant and free. Skateboarding isn’t a sport. It’s free time. That’s what I try to capture with the skateparks.

Who are your clients, mainly?

That’s pretty amazing, as I can think of a number of places where skateparks would not be considered a well-thought use of public funds.

It’s actually a very good investment for the municipality. One teenager who drops out of society costs us about the same price as one skatepark.

Going back to the idea of context and your approach to site and materials, I really want to talk about this project in Sweden, Steelpark. It’s such a beautiful example of how to use what’s already there, not just from a topographical point of view, but a literal re-use of existing materials that would otherwise be seen effectively as trash.

Steelpark [in Luleâ, northern Sweden] was my third big skatepark project. In my second project [Grani, in Kauniainen], we reused a number of materials from the site so it was something I had already been thinking about. Luleâ skatepark is probably my most precious, personal project.

The city gave the local skate club the design lead on the project and the father of one of the skaters called me up and said, ‘my sons have been looking on the internet and they think Micropolis is the best and so they want you to design our skatepark.’

I went for a site visit and the local steel works had such a strong presence in the area. We ended up looking around the steel factory junkyard and as soon as I saw this giant ladle used to mix melted steel and other things, like casts that went wrong, I knew I wanted to incorporate these pieces into the park. It also helped with the design to have existing pieces to work with, rather than just a blank piece of paper.

In terms of reception of your work, is it mostly the skate community who are intrigued, or is there interest from the architecture side as well? Do you care about how your work is positioned?

Of course. I care a lot.

The more I do skateparks, the more I find value in it, the value of serving young people. I think young people are the most urban people there are, partly because they have free time. If you think about most adults, it’s just working, going to the grocery store, cooking dinner. It’s a very small amount of time that they spend hanging out in the city. I’m doing architecture for architecture fanatics who spend all of their free time enjoying urban space. I feel that I’m serving the best users.

How do you think that your ideas about design have been influenced by growing up in Helsinki and Finnish design more generally? Nature is such a foundational part of the Finnish psyche, but I don’t think most people associate nature with skateparks…

First of all, on the scale of the city, we shouldn’t try to be a good, small New York. If we try to be a very urban city, we will still only be a small, crappy version of New York. But, we can be the best Helsinki in the whole world.

Same works with the skateparks.

We don’t necessary need to have the biggest concrete skatepark in the world. Rather we should focus on having the most atmospheric and authentic skateparks in the most amazing landscape settings; in the forest or on the bedrocks, that’s the thing of thing we could do the best in the world.

With my designs, there’s always a strong attempt to incorporate nature. I usually get good feedback from the skaters about my parks, so maybe we’re not so urban here in Finland after all.