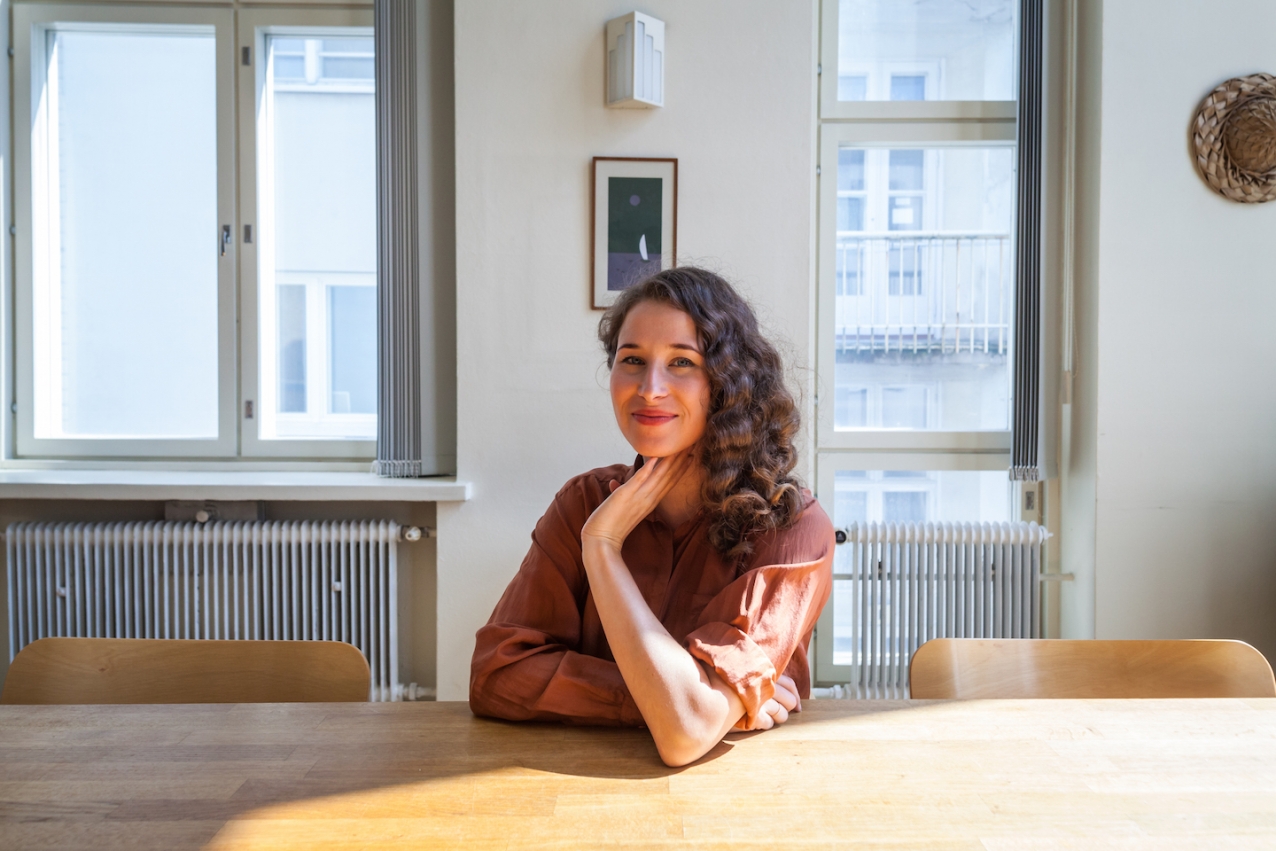 Illustrator Janine Rewell hates freelance studios that are only cemeteries of computers and storage. After a long search she found place in an old church. Writer Crystal Bennes presents on Weekly Studio interestings studios and their owners.

You initially studied graphic design, but now work as an illustrator? How did that transition come about?

Growing up, I was always drawing, but I had this idea in my head that it would never be possible to do something related to drawing as a profession. I found graphic design to be close to illustration, so I did my degrees in that, here in Helsinki at Taik, as well as at the Rhode Island School of Design in the US.

Where do think that idea came from – that illustration wasn’t possible as a profession?

In the early 2000s, when I was thinking about becoming an illustrator, it wasn’t really a business here. It has only really existed in Finland for the past 10 years, in the sense of working internationally, in commercial fields and integrating with other creative disciplines.

Before that, illustration was mainly used in a smaller scale for editorial work, in books and comics. From my perspective, what made it possible to establish internationally was the internet, but also illustration agents, who didn’t really exist in Finland before that time. The first agents set up in Finland in 2007.

Were these international companies who set up branches in Finland, or Finns who established themselves as agents?

Agent Pekka, for example, who represent me, established in Finland. At first, they worked exclusively with Finnish illustrators but then they began expanding, and now they mainly work in international markets with international illustrators. When they started here in 2007, the illustration business was already well developed elsewhere in Europe and America. Finland was a little bit further behind.

So you studied graphic design?

I studied graphic design because I wanted to have a secure, creative job, which is silly because when you look at current statistics in Finland, graphic designers rank highly in terms of unemployment. Part of the problem is that it’s a popular major and I think it is being offered out of proportion with demand now that we’re in recession.

Do you think these things are linked, the rise of illustration and the recession? There’s a lot of interest at the moment in pushing products that have some kind of connection to the home-made or the hand-made.

I would say that the rise of illustration is more connected to the growing experience sector; photography has been overused in the field of visual communication and other techniques like illustration are re-considered.

It’s also that development escalates through endless feedback loops. I think that people have always valued handmade objects above mass-produced objects, but there seems to be something different about the current DIY trend, which seems more about a reaction to the omnipresence of digital, than a genuine interest in the technique of craft.

You realised early on that you were more interested in the computer as a story-telling tool, rather than what kind of digital effects it could produce?

Exactly. Soon after the millennium, when I first learned how to use visual computer software, it was all about using the computer as means rather than a tool; it was like a contest of who knew the most about Photoshop effects and layers rather than how to use the computer as a tool to work more efficiently. I think that’s partly why my style stood out, because it’s geometrically very simple.

So, that’s how it all started. I briefly worked in advertising when I was doing graphic design, but I soon realized that I would rather work towards developing my own career as a freelance illustrator than work in a studio. Initially, I shared a studio with close friends but soon I realised that our working habits are very different.

A lot of creatives are very private with their work process, but I enjoy working in a community where we can listen to music and talk, and consult each other when faced with problems.  I must have changed between six studios in the past nine years.

So for you the studio atmosphere is really important?

Yes, freelance studios can sometimes turn into cemeteries of computers and storage, where people never actually come in to work. So, it’s as much about finding a group of people who are committed to their careers as freelancers as it is about finding a physical space. We are 13 creatives all together here at Folke.

Well, it also looks like you’ve found quite an impressive space!

The studio used to be a church, you can still see the outline of where the cross used to be. We’re lucky because we have three floors, with enough room for messy work in the basement, a computer room and a photography studio upstairs with amazing natural light that we also rent out. https://folke.fi/rent-a-studio/

In terms of how you approach commissioned work, I’m curious as to how you balance your own style with the client’s brief.

Well, in many cases there’s me, then my agent, then the ad agency producers, then the creatives in the ad agency, and finally the client. That’s a very normal chain. Of course, in smaller projects, I’m directly in contact with the clients, but seldom is that the case.

In that case, presumably your initial submission must often wind up looking completely different from the end result, having been through so many stages of translation?

Unfortunately, a lot of times, that’s exactly what happens – sometimes for the better, sometimes not. From the client’s point of view, we’re the crazy artists, and they want to have proper business people putting the project into a business language.

Most people I know who work as freelancers in the creative industries aim to balance commercial work with personal projects.

Yes, as when there’s a lot of money involved, clients want to be safe. They want to order something that they’ve already seen in a portfolio. So when I’m not doing commissioned work, I’m trying to do personal projects that are fulfilling, but that also enhance my portfolio with the kind of I would like to do more of. So in that way, I try to direct my career with my personal projects.

Has that been a successful strategy for you so far?

So far, yes. Those projects tend to be more interesting, but they also get more visibility. For example, in Finland, I made a body-painting collaboration with Minna Parikka. It spread widely online and somehow the creatives at Nike saw the work and became my client as a direct result of the project.

Or, I did another personal project, a window-painting piece. Working with a friend, we made a video and put it on the web. Samsung in Korea saw it and wanted to use the concept for their new tablet phone ads. I made two films for them, using the same concept. It might take years for something to come back, but I have to believe in the work I’m doing. Luckily, Finland has a great grant system to support these personal projects.

Which is a perfect segue into talking about Finnish design culture and aesthetics, and how your work fits into that tradition. I read a previous interview where you talked about the connection between the welfare society and design, specifically how designed objects were for a middle-class market rather than a luxury market, which is an interesting point.

Then, there’s also the relationship between ornamentation and the legacy of modernism in which ornament is strictly not allowed, something which still seems to linger in Finland.

I think it’s a pity, because Finland also has a strong tradition and long history of ornamentation which you can find traces of in folkloristic tales, textiles and clothing. They aren’t quite as popular as perhaps they used to, but they’ve been a very strong inspiration for me and that comes through quite strongly in my work.

We Scandinavians are stuck in this minimalistic identity that came out about 70 years, ago but Finland has much longer history than that.

Because you work mainly on a computer, do you get the impression that people frown upon illustrators working digitally, rather than drawing by hand? Or does it not seem to be something people really think about?

I would say that people are still much more appreciative of a physical end product, rather than a digital product. Digital still isn’t yet perceived as having the same value as physical.

For example, about 10 years ago, I made stamps for the Finnish post. If the design of the stamp is made originally as a painting, for example, after the stamp-making process is complete, the post will purchase the painting for its collection. But if it’s digital, they’re like, ‘What do we do with this .psd file?’

These differentiations between how value is ascribed to objects are so interesting. Also, I think because people are becoming more and more interested in the process itself, that’s beginning to affect how value is perceived.

Absolutely. More clients are wanting to do ‘behind-the-scenes’ or ‘making of’ videos, with the idea that interviews with the designer add value to the project.

Is that frustrating or flattering?

It depends. One client wanted to use my face in an agricultural newspaper ad to promote the illustrated products that I had done for them. I wouldn’t agree to that.

There’s a lot more pressure, now, for the creator to sell their life story or their face along with their designs…

And a surprising number of clients pitch the commission as, ‘The budget is not very big, but your name is going to get a lot of visibility through our marketing channels.’

At the moment, I have a touring exhibition in China and singed with a local illustration agent who represents me there. Now that we’re in the process of negotiating with potential new clients, it’s interesting to see the differences. Having your face or name exposed as the creative in China is not something considered to be available for free. It’s all provided for in the budget.

To return to this idea of a Finnish design tradition, do you see your own work as part of this tradition?

I think it’s unavoidable. I have grown up here, surrounded by the aesthetics and that has completely formed my understanding of what is beautiful or not.

We have so many rules here, from what colour you can paint your house to its height. Nothing can stick out, everything has to be democratic. Nothing can annoy anybody else; better safe than sorry. If your house is bright red, you can be sure that you’re going to get a notice from the city. My style might not seem typically Scandinavian, but I’ve grown up here and naturally filter the aesthetics through my work.