Weekly Pics is a peek into the visual diaries of designers and design professionals. The Executive Producer of Tori Quarters, Anna Pakarinen, is responsible for the area’s marketing, events and concepts. This week we see what Anna’s work looks like during one of the busiest weeks of the year.

In addition to late summer, Christmas is the busiest time at the Tori Quarters. Its old town atmosphere is a natural setting for the season. Picturesque and presenting city centre on a smaller scale, the area is well suited to highlight the mystery of Christmas.

I have worked at the Tori Quarters for more than five years, and the beauty of the area still makes me pull out my camera most every day. I love the building style of the Cathedral! Varying light gives it a new look day to day, hour to hour. Sometimes the sun elevates it sky-high, or it’s embraced in blue by the magic hour, clearing the darkness with its brightness.

There’s all kinds of beauty in the city, and the point is that esthetics matter.

Fantastic Finland100 celebrations on the Independence Day! On Tuesday, we had a pre-party at the office with sandwich cake and coffee served in Myrna cups by Arabia.

Not without mixed feelings. There was some discussion about the use of urban space. How can one make a wrong choice between joy and fear?

The socks in the photo are from the Helsinki Christmas Market on the Senate Square. They are made of alpaca wool from Solenda, Cecilia and Alberto stationed in Kangasala.

Helsinki Christmas Market became part of the Tori Quarters development four years ago. We wanted to challenge ourselves and the whole city to achieve a bigger purpose: to make Helsinki the most interesting Christmas City in Europe!

Executive Producer of the Christmas Market Isabella Rossi has reason to be extra proud this year. The event quickly gathered a record number of visitors, and the Market is probably the most photographed place in Helsinki during Christmas. Let’s make one thing clear: Yes, you can buy spiked glogg at the Christmas Market. This has been a concern to many. 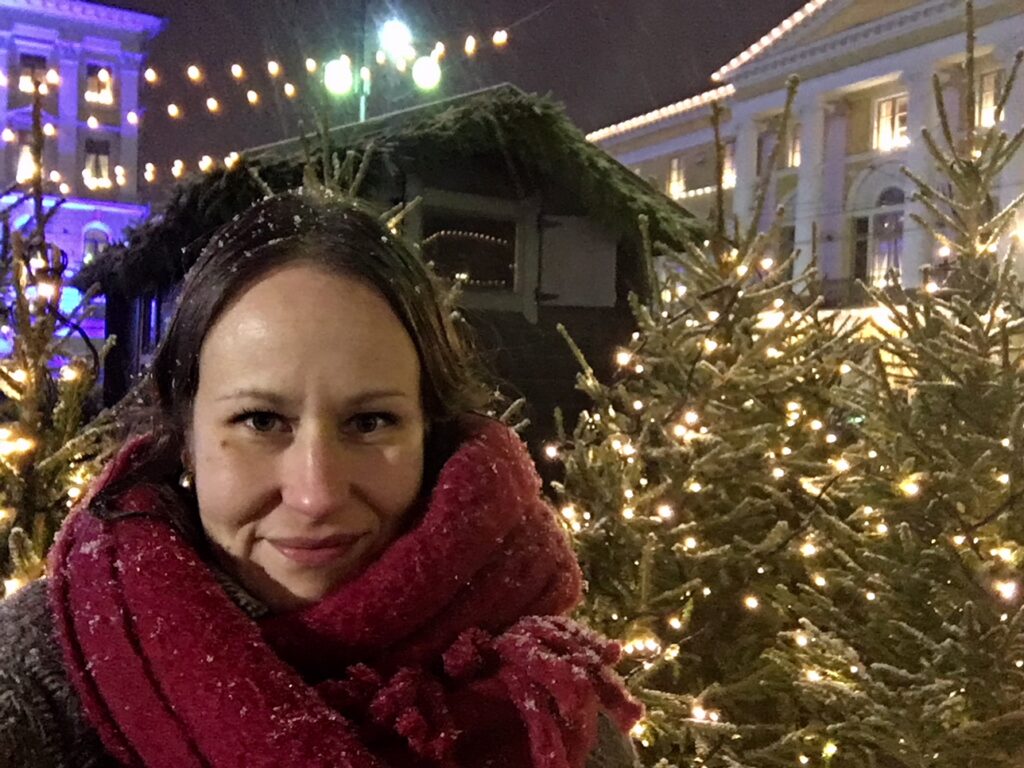 This week nearly all of my photos have been taken in the dark. Perhaps because it’s dark all the time.

It seems there are more (Christmas) lights in Helsinki than ever. Nevertheless, the darkness is like a black hole. As I was touring the quarters during the week, I was thinking how important light is. Over the years the Tori Quarters have struggled with directions. How to get people to choose new routes in an all-too-familiar milieu?

Then we had snow! What a difference. So beautiful! We are grateful for every drop. Snow equals white light.

I was so happy that I went wild and took a selfie. 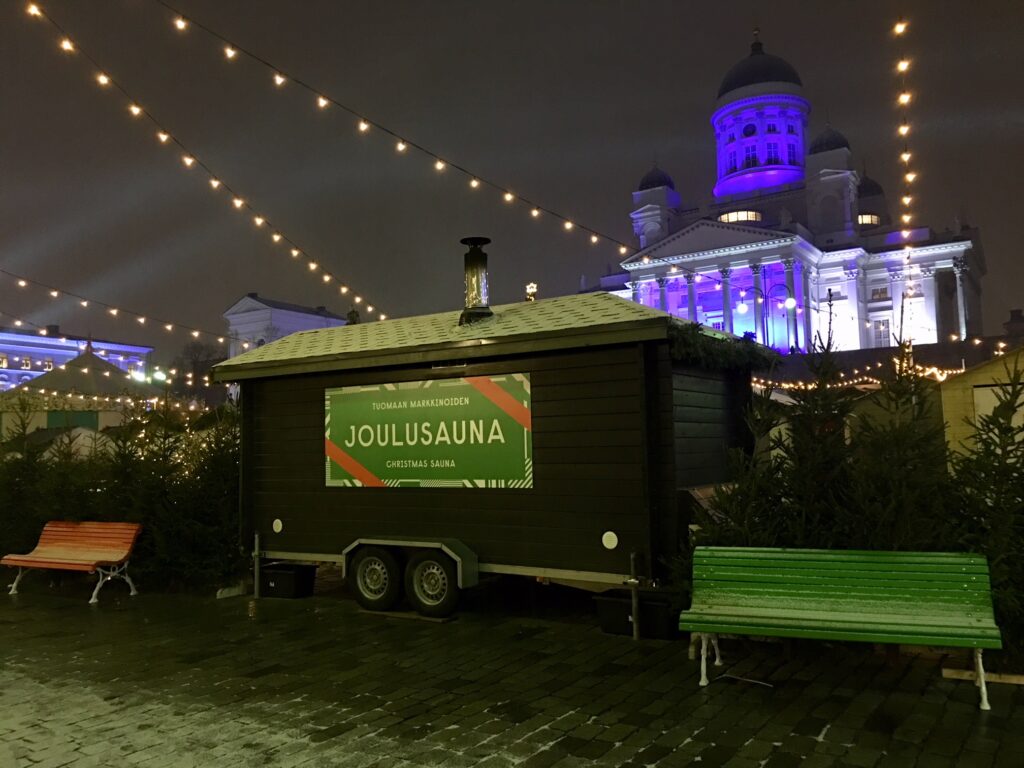 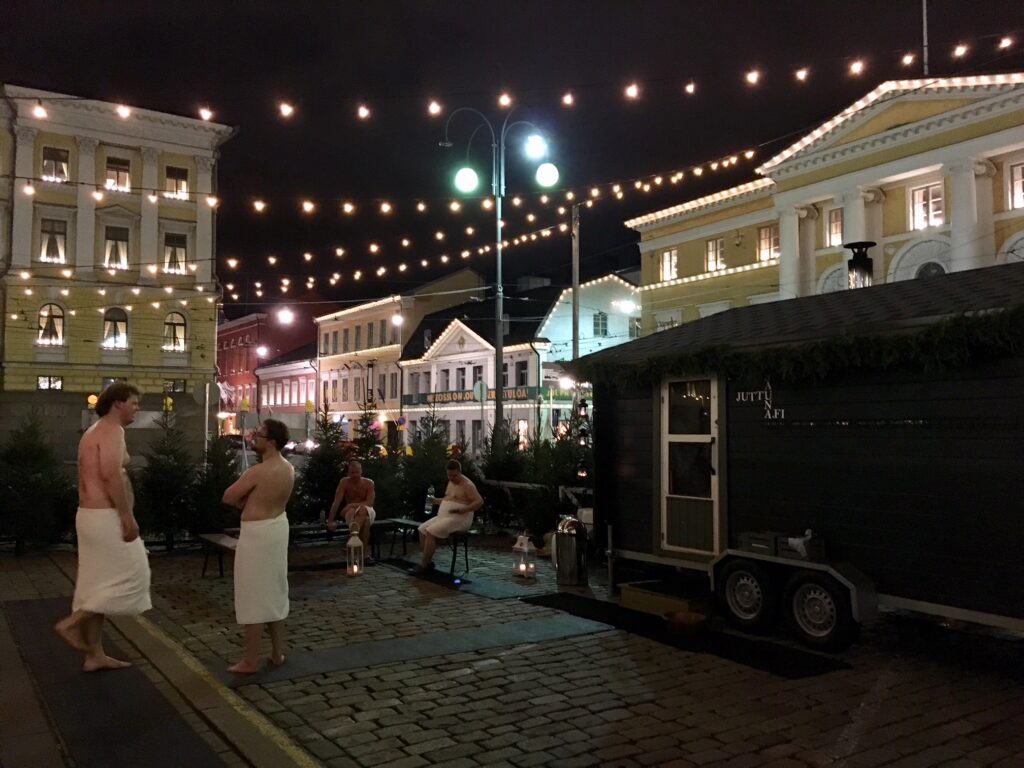 This year the Tori Quarters Christmas Sauna was moved to the Christmas Market. For four years, we provided Christmas Sauna in the courtyard of the City Hall, and the year before in a tent outside a museum. In principle, this is the sixth year. There is one person who has been to every single one since it started. Seeing that person wrapped in a towel in the Senate Square brought tears to my eyes. Age has made me sensitive to traditions.

I could talk about the miracle of sauna for hours. Many a Finn could do the same! Luckily it’s not just words but also deeds. Our public saunas are fine places for urban soul-searching. Finnish sauna culture and the saunas in Helsinki have been mentioned in various international media this year; The New York Times, Forbes, The New Yorker etc.

Christmas rush makes one work overtime. Yet I needed to pop in at the sauna on Sunday, too. I always leave the place with a healthy portion of Christmas Spirit.