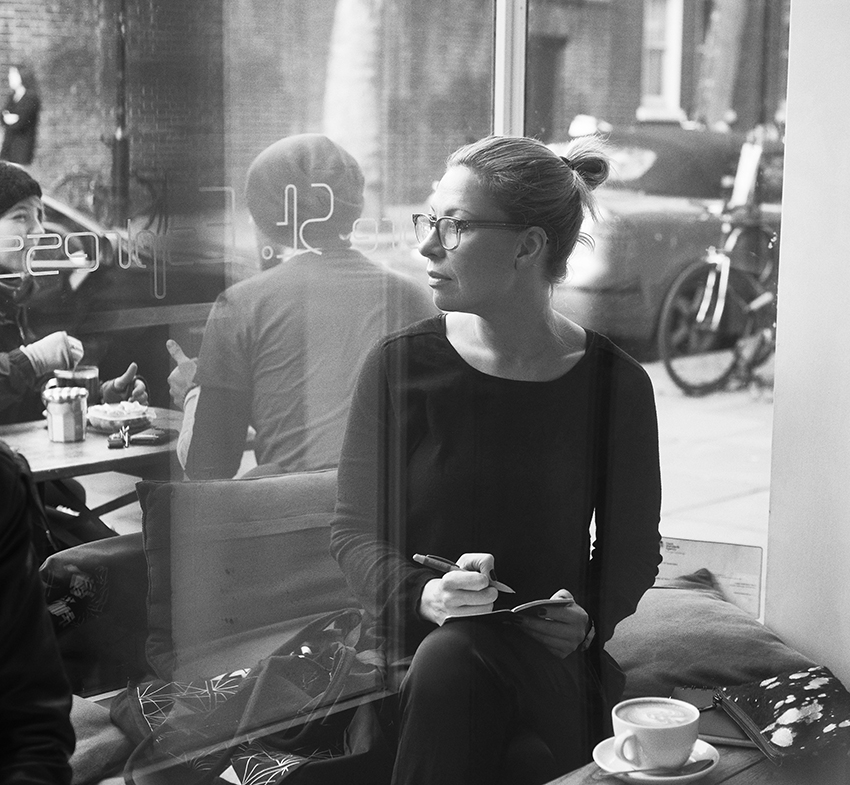 In advance of interviewing shoe designer Julia Lundsten, I’m struck by the lack of information about her while searching online. She doesn’t have a personal Instagram account or much of a social media presence to speak of. And while the website and social media accounts of her influential footwear brand FINSK are live, they aren’t regularly updated. At a time when most creatives are broadcasting at a near-constant rate, Lundsten’s reserve is refreshing. “I’ve never taken a selfie in my life and I never will,” Julia Lundsten says, on the phone from London, her home for the last 22 years. “I have a professional side, which is my work, but also a personal side and I don’t want to show that to the world”.

Lundsten launched FINSK in 2004, a year after graduating from the Royal College of Art. Driven by her desire to create a brand underpinned by ethics as much as by a unique aesthetic vision, Lundsten sought out ethically-produced materials and stuck true to her graphic sensibility. Working on the evenings and weekends, Lundsten soon turned FINSK into something of an industry cult, winning early support from luminaries including Manolo Blahnik who claimed her work was “like nothing anybody is doing at the moment”.

Yet, after a solid ten years of producing collections for FINSK, Lundsten increasingly felt that the pace was no longer sustainable. Although sustainability concerns—environmental as well as mental and creative demands—have become progressively prominent in fashion industry discourse, real change has taken time to materialise. In part because, as Lundsten herself realised, such change must come from designers as much as from the industry at large. “About three or four years ago, I started asking myself what the point was in constantly producing collections,” she says. “Both in terms of the financial stress, but also in terms of creativity, because we were just doing what our buyers or influencers wanted. At some point, it stopped feeling like it was about design”.

On reflection, Lundsten realised that she was running FINSK in a particular way because “those were the rules of fashion”. Eventually she decided to stop producing regular collections and focus instead on working directly with private customers drawn from her existing clientele.

Five years ago, she also took on a business partner for FINSK, a decision which resulted in more time for her to refocus on design, both for FINSK as well as for consultancy work. Now, alongside her own brand, Lundsten also creates designs for high street brands such as Amazon footwear and River Island alongside occasional design work for various international fashion houses.

“I trust my instincts and FINSK is a small brand so we were able to make decisions about how to re-organise ourselves and it’s worked out very well,” Lundsten reflects. “I’ve gone back to being a designer again rather than a business manager.” In rejecting the fashion industry’s feverish seasonal pace, Lundsten says she has reached an ideal professional balance, one which her younger self may have had a hard time appreciating. Where in its early days, she aspired to grow FINSK into a bigger brand, she now appreciates the creative freedom afforded by a more manageable-sized business.

“In a way, things have come full circle because for a while the brand was growing too much and we started having to do some cheaper products for brands; I felt like I was losing control,” she says. “But now, the balance is much better and it’s been interesting to see that a lot of other brands have stopped making collections too.”

Having moved away from Finland when she was 19, Lundsten has now lived in London longer than her native country. For the last fifteen years, the designer has made her home in Bloomsbury, a central, villagey district surrounded by the hustle and bustle of Britain’s capital city. Both her studio and her son’s school are a short walk away, as are some of London’s most enticing cultural offerings—the wonders of the British Museum and the restaurants and bars of Soho.

“When I moved to London from Finland, I always knew that I wanted to live very centrally,” says Lundsten. “I just love it. You turn the corner and there’s a pop-up exhibition you didn’t know about. You’re always being surprised by new things which is very inspiring.”

And yet, for all the city’s delights, I wonder whether the current political situation with Brexit has cast something of a pall over the city for Lundsten.

“It’s a strange atmosphere because someone could suddenly tell all the Europeans who have lived here for so long that they have to go home and there’s also a lot of pressure as a small-business owner” she says. “It’s a real shame, but at the same time we just have to keep going and get on with things”.