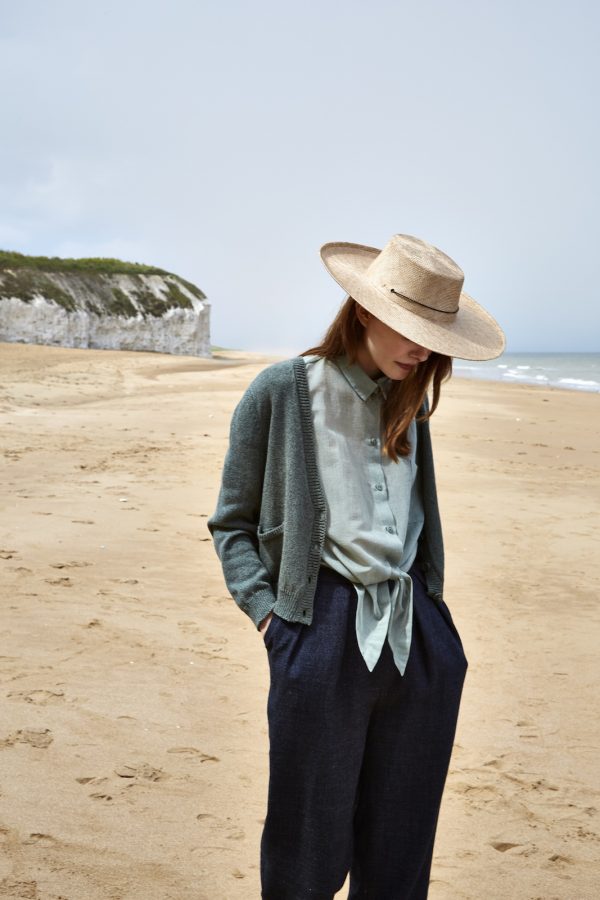 Samu-Jussi Koski has energized the clothing business in Finland. The Samuji brand now targets the United States and opens a new boutique in Soho, New York.

Samu-Jussi Koski emerged in the Finnish design field as if on cue. He became known while working as a designer and art director for the biggest textile company in Finland, Marimekko. His success in the 2000s has been a kiss of life to the whole clothing business in our country.

The essence of Koski is uncomplicated and modest. In the fashion field, he is known for his boyish and fun character. He managed to generate a personal media frenzy already when he was working for Marimekko.

Yet it is a coincidence that Koski ever became a clothing designer. “I was thinking to apply to study photography, but I failed to book sufficient hours in the darkroom. However, I was able to make drawings for the fashion department entrance exam at home at night.”

Koski got accepted to the Lahti University of Applied Sciences’ Institute of Design. During his studies, he worked as an assistant in the theatre and performed in a children’s programme on TV. He spent a year in London as an exchange student.

The golden boy of Marimekko

Koski started at Marimekko as a trainee. He was talented and quickly moved up the career ladder within the company. His first collection was introduced to the public in 2005. It is hard to say whether the legendary Marimekko was more of a fluke to Koski than Koski to Marimekko. Known for its prints, the brand made a comeback to trendy magazines and became interesting for the general public again.

Koski’s sympathetic persona and success injected energy to the entire business. After taking his master’s degree in the Polimoda Institute in Italy, Koski returned to work as art director in Marimekko. Altogether, Koski spent ten years in Marimekko.

Samuji with a big heart

Koski’s own business Samuji is living through its seventh year. The brand has gained plenty of recognition in the fashion business, such as the “Golden Hanger” (Kultainen vaatepuu) award in 2012. Koski’s sense of esthetics is appreciated by clients and colleagues alike.

In a very short time, Samuji has grown into an international brand with 90 resellers. In 2013, the company featured a collection of men’s clothing, and in 2014, interior design products.

The newest conquest is seen in September as Samuji opens its own boutique in Soho, New York.

“We’ve sold products here and there, but now people will have a chance to see the big picture. I’m looking forward to showing what we do and what we can do. Samuji is, after and above all, a lifestyle brand.”

With Samuji, the most important thing is quality: the product must be able to stand the test of time in terms of quality, physique as well as esthetics. The products are mainly made in Estonia and Italy.

Samuji as a way of life

Koski’s stores and design office have been decorated in a laid-back manner that nevertheless respects quality. The spaces feature hefty leather sofas and veneer baskets found in a flea market – softly patinated classics each. These objects do not shout out their existence but bring in sensitivity that tunes us into experiencing the space and the moment. The style has been described to present silent and leisurely beauty.

Samuji’s Koti (Home) collection has been created by several designers. Prints and decorative objects have been designed by Erja Hirvi, Matti Pikkujämsä, Karoliina Hellberg and Pasi Kärkkäinen, among others. Koski has known some of the designers for quite some time. They are currently finishing a set of tableware as part of the Home collection.

Men’s clothing is waiting for its turn. Men’s garments were taken into production to fulfill the customers’ wishes.

“Our Japanese purchasing agents started to order large sizes of women’s clothing even though Japan usually only sells size 34 (small). It turned out that Japanese men wanted to buy our pants, for example.”

From a muse to a designer

“Whatever we do, we want to do properly. That is written in the Samuji DNA.”

In practice, this has meant delegating the responsibility.

“It is clear in this company that I am not a loner. We have wanted to create jobs for the people.”

Some changes are in sight to women’s clothing. The Pre-fall collection launched in June was designed by Jenni Väänänen, a good friend and former fellow student of Koski since the design school in Lahti. Väänänen and Koski learned to know each other 20 years ago while traveling by train to attend the school’s entrance exam.

In the future, even more design responsibility will be given to Väänänen. In Koski’s words she is a talented and analytical designer.

“Jenni has been a muse to me. Of course there are others, too,” he states.

Inspiration in ballet and gardens

Väänänen feels her framework lies more in design than in fashion. She has a past in clothing and mobile phone design. She is continuing her studies of sustainable development in the Aalto University that started with her master’s degree in the Creative Sustainability programme.

She has gathered work experience from a design company that developed mobile phones and other consumer electronics for large brands. This helped her understand colour and material design.

“The products were engineering-based and had a really long product-development cycle. My job was in the beginning of the process, and the final decisions were made by people above me, so I rarely saw any concrete results,” Väänänen explains.

“Through understanding consumer and design trends I am able to figure out what kind of products people like. I try to anticipate this liking while creating the visual concept for a product.”

Väänänen’s first design assignment for Samuji in 2013 was a bikini collection in dark tones. The Pre-fall collection of 2016 was inspired by the milieu photos of Danish artist Vilhelm Hammershøi with their calm colours and atmosphere. In addition to art, Väänänen is inspired by gardens, forests, and revisiting ballet-dancing as a hobby.

She thinks the best thing about Samuji is team work. “I love to see print and accessory designers take my ideas forward, the ideas come to life, and the big picture forming before my eyes. Of course the most rewarding aspect is to see the actual piece of clothing materialised and worn by the customer.”

Samuji’s clothes are mostly serene – a bit like slow dance music. The brand features tweed skirts, white blouses and shirts, trench coats, classic cardigans, and similar items. Koski has a way to inject street credibility into classic garments while creating a vibe of office credibility for the bohemian hipsters.

The same silent beauty is included in Samuji’s interior design products. But he cannot succeed in the superficial fashion world by making quality classics, or can he?

“We prefer non-trendiness. A Samuji product is rarely committed to a certain moment but rather separated from it,” Koski says.