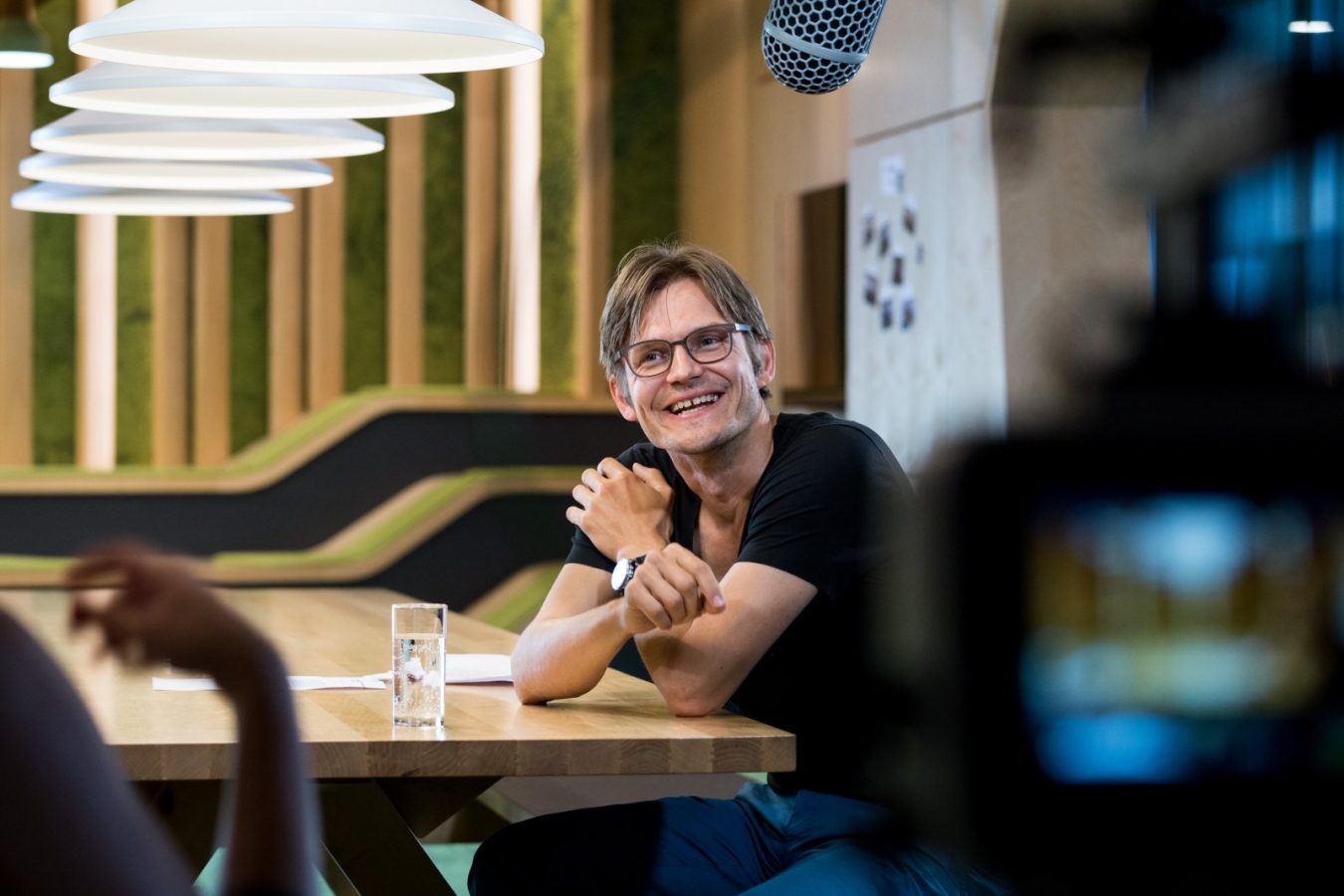 Interaction designer Jussi Ängeslevä has made Berlin his home for over fifteen years. Weekly Abroad speaks to him about balancing industry and academia, the importance of good communication and the changing atmosphere of Berlin.

Since the 1990s, Berlin has famously been a magnet for low-paid, but ambitious artists and designers seeking to build their careers on the back of the city’s historically cheap rents and abundant studio space. Although Berlin is no longer as affordable as it once was, the city’s magnetism continues to attract creatives from all over the world.

“The city has transformed since I first moved here,” says designer Jussi Ängeslevä, of the city he’s called home for over fifteen years. “When I moved to Berlin I realised that I could pay my rent by working one day a week. And although it’s not like that anymore, the creative hedonistic spirit of those days is still prevalent.”

Ängeslevä came to Berlin via stops in Rovaniemi and London to complete his BA and MA courses respectively (and a stint in Dublin as a researcher at the MIT Media Lab Europe). Although initially drawn to the arts, Ängeslevä pursued his undergraduate studies in audio-visual media culture as a compromise deemed more likely to result in greater employability. Scouting European course offerings pairing computing with creativity, Ängeslevä discovered the more-or-less only existing relevant programme at the time was at the University of Lapland, relatively close to home.

Following his undergraduate studies in Rovaniemi, Ängeslevä traded small-town life for the big city and took up an MA studying Computer Related Design at London’s Royal College of Arts. There, he drew inspiration from the passion and motivation of his fellow students as much as from the programme’s faculty, honing the communication skills that would later come to serve him well in his professional life.

“In retrospect, my youthful hobbies of acting and playing music have served me well,” he says. “One would think that if you can programme and design you can make things happen, but so much of what I do is create empathy by communicating concretely to clients as well as to colleagues. That’s really the bread and butter of what I do now.”

By way of example of the importance of communication and an ability to elicit empathy in his current work, Ängeslevä cites Petalclouds, a recent project produced by ART+COM, where Ängeslevä is Vice Creative Director. The 200-metre long kinetic installation, comprising six clouds that seem to move slowly in the sky, was custom designed for Terminal 4 of Changi Airport in Singapore. Petalclouds in Singapore Changi Airport, connecting the land and the air side of the Terminal 4.

Petalclouds is Ängeslevä’s second ART+COM commission for the airport, that initially contacted the design studio after seeing a video of their previous work online. That first project—Kinetic Rain, installed in Terminal 1—is now ten years old and has become something of a mascot for the airport. Amusingly, Ängeslevä says that the studio constantly receives emails with requests to purchase modified versions of Kinetic Rain, in different colours or configurations; it’s success has meant that it’s seen as a product, rather than a custom-designed piece for a particular space. Making of Petalclouds: the custom-made winches driving the kinetic sculpture on the workshop floor, before the first test assembly.

Building on the trust established by developing and installing Kinetic Rain, Petalclouds pushed the collaboration to its limits, involving many different, typically unrelated departments across the entire airport. It is because of this, among other reasons, that Ängeslevä considers commissioned artworks more akin to design than art. There’s a brief and health and safety standards to consider, he says, security and maintenance operations, not to mention the many complications which arise from the fact that the sculpture traverses both airside and landside operations.

“At the end of the day, my job is to keep the purpose of the project alive through all these complexities so that the final piece keeps its “soul” somehow, rather than becomes a machine-like,” Ängeslevä says. “That’s why communication is so vital; you have to constantly remind all the different people involved that it will all be worth it in the end.”

Alongside his commercial interaction design work with ART+COM, Ängeslevä speaks articulately of the importance of working across both industry and academia. Currently, Ängeslevä is an Honorary Professor at University of the Arts in Berlin as well as Visiting Professor at the Royal College of Art, London. Sketches, scribbles and drawings are an irreplaceable part of the design work.

“In the studio, we work with big budgets and highly experienced, expert people to quickly produce concrete output in the real world,” explains Ängeslevä. “At the university, on the other hand, I can speculate and be much more controversial, but the work is done on shoestring budgets with “real operational intelligence” to make ends meet. There’s also the dialogue with students who are exposed to different realities and who constantly challenge me.” Lo-tech that makes high tech: agile development Kanban board at the studio.

Increasingly, however, academia is coming to Ängeslevä at the studio as ART+COM take on more and more government-funded academic research in collaboration with European institutional partners. Currently, funding exists for ten full time staff over the next three years to work on a number of dedicated research projects.

“Generally, the research aims at product development, but the real benefit is that we’re able to explore new technologies or approaches that we wouldn’t otherwise dare to propose to a client because of the uncertainties, and build an intuition about them” Ängeslevä says.

Returning to the question of whether Berlin remains a good city for people working in creative fields, I ask Ängeslevä whether he would recommend it to his RCA students from London, for example. He pauses for a long moment before replying. Although Berlin is still cheap in comparison to any metropolitan European capital, he says, the work tends to be elsewhere, particularly for artists. Designers, particularly in the start-up infested industries, however, are more highly sought after.

“The city’s biggest selling points have historically been cheap rent and ample space, which is changing,” he reflects. “But the nightlife scene and the cultural scene haven’t changed. It’s an ugly city, but beautiful in what people make out of it.”