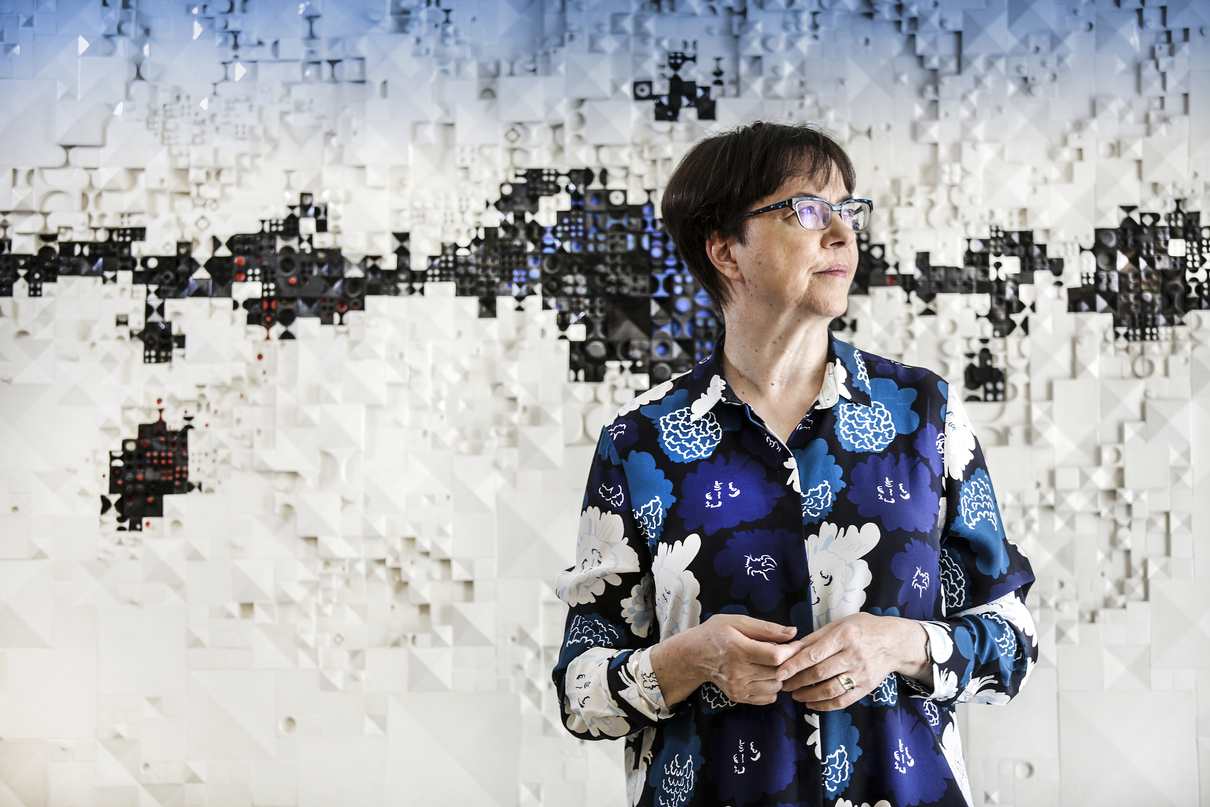 Anne Stenros thinks it’s a good day when she learns something new. Weekly found out what is included in the daily work of a City Design Officer.

Anne Stenros started in her position as Helsinki’s Chief Design Officer in September 2016. The job description has gathered a lot of interest, especially from abroad, because it is a pioneering position.

The City of Helsinki is among the first cities in the world to hire a Chief Design Officer (CDO). The objective is to utilize design knowledge and enforce experimentation culture.

With more that 40,000 employees and dozens of large organisations in its tow, the City of Helsinki is one of the biggest employers in Finland. It is important to leverage existing knowledge and expertise.

Your job is the Chief Design Officer for the city of Helsinki, but your background is in architectural theory?

I completed my architectural studies in Finland and then took a second Masters at Berkeley before doing my PhD in the theory of architecture.

Afterwards, I saw glass everywhere, glass ceilings and glass walls. I concluded that there weren’t any positions for me in architectural education given the male-oriented focus, so I turned to design instead, partly because of my family background.

I became Managing Director of Design Forum Finland for nine years, promoting Finish design nationally and internationally. I was then headhunted to run Hong Kong Design Centre where I stayed for one year, and when I was in Hong Kong, Kone headhunted me for their first Design Director and I came back to Finland.

In September 2016 you were appointed as the first Chief Design Officer of Helsinki. What prompted you to apply for the position after your time at Kone?

I actually left Kone to take up a full professorship at Aalto, but it wasn’t my world. I just couldn’t see the future there. Because of my ten years working at Kone, I was very goal oriented, much more ambitious. It was very hard work and somehow I found the University environment too slow.

You are always travelling! It seems that public relations comprises a big part of your CDO role.

Yes, I’m a talking head. I don’t know how it is with other disciplines, but in design you need a face to make things tangible. It’s not about having a creative genius, but a creative collective that is working behind things.

With the CDO position, there has been a lot of interest, especially from abroad, because this is a pioneering position. People want to know what can be done, what kind of role can be developed, in order to learn whether or not they can copy it in their respective cities. But I think there are no such secrets to learn, because it is very context driven. You can apply best practice, but you can’t really copy because it depends so much on culture, context and the maturity of the organisation.

I imagine this aspect of the job makes it difficult to get work done within the city government itself?

Well, there are three parts to the position. One is branding the city in terms of design, that’s the public figure part. The second is future navigation and what ideas can you bring into city governance or functions. And the third is how you develop these ideas and implement them to support the functions of the city. They are all quite different tasks.

To date, I have been involved in the first two tasks, this foresight schematic work and public speaking, but not as much with the third. After June, I will move forward with the Helsinki Lab, which is something I really need more time to go through. I see the Lab as a kind of mothership. Frankly, the city already has so many interesting existing initiatives, I can’t see why we should establish another, but rather a team that will support existing labs.

The CDO position seems to be a clear statement of the city’s belief in the economic and public policy benefits of design?

Yes, I think it started in 2010 when Helsinki was Cultural Capital of the EU. Then the city successfully applied for World Design Capital 2012 and has subsequently put a lot of effort and resources into design. But it has been more on a project or events level and this is the first time design is really being involved at the strategic level.

How do you think that design can enhance public sector service planning?

I think it works two ways. In a positive sense, design thinking can guarantee better citizen experience in a broad sense. It can also provide a future perspective as designers tend to look for what’s next, they are always focused on how to face future challenges.

For example, our four future scenarios for Helsinki 2030 are tools for strategic discussion. Over 250 leaders of the city have participated in workshops where we have discussed the citizen experience of the future so that we can make informed decisions about how to proceed.

What kind of reactions have you had to these scenarios?

They have been very positive and people are very engaged. I think this is partly because of the way we have done the workshops, but also because of the tools based on the different scenarios are more visual. It’s not just linear, analytical thinking based on prior numbers, but a more intuitive discussion based on what could be. It’s complementary to the old scenarios-planning process, but it’s non-linear and based on intuition rather than an analytical approach, although it nevertheless relies on facts because we did a lot of research.

And have you noticed a consensus on the four scenarios? Is there a clear winner?

The basic idea is that value creation should be co-created in the future, but it depends on both how willing and able people are to be involved. In one session, for example, the biggest number of votes went to the idea of a Civic Sharing City, that is an actively-collaborative involvement, but of course we know that not all people can give so much time for co-creation in practice.

In essence, all of the scenarios already exist to a certain degree. The questions for the future is to what extent we want to push one or the other. We can see that people are willing to engage in collaborative modes of working, and there’s also the idea of the global and local mind-set which is driving people. I can see that we will be dealing more and more with citizen democracy and the collaborative economy in the future, and it’s better we adjust our thinking rather than close our eyes to it.

Everywhere around the world, people are taking action themselves, they want to contribute. It’s a movement from empathy to emancipation. People want to do something. If you look at young service designers they all say, we don’t want to complain, we just want to do something. For the first time since the 1970s, design has become very political again. Things are changing.

Your office is in City Hall?

Yes, I have one real room where I can close the door. All the walls are full of papers, mainly linked to my strategic planning work. I have the layout for the publication we are preparing, a vision map and timeline. Then there are boxes full of workshop papers, because I don’t have time to empty them. So, I go from one workshop to the next and pick up the brown boxes as I go. I would love to have more space!

It’s interesting that you pin up papers and display technical strategic planning documents in such a visual way.

It’s inspiring and also valuable for discussion. It’s a method for dialogue. When people come to my office, I can explain and they can comment. If all these documents are only on my computer, when I close the lid they disappear. I’m an old-fashioned girl. That kind of setting out information really appeals to me. 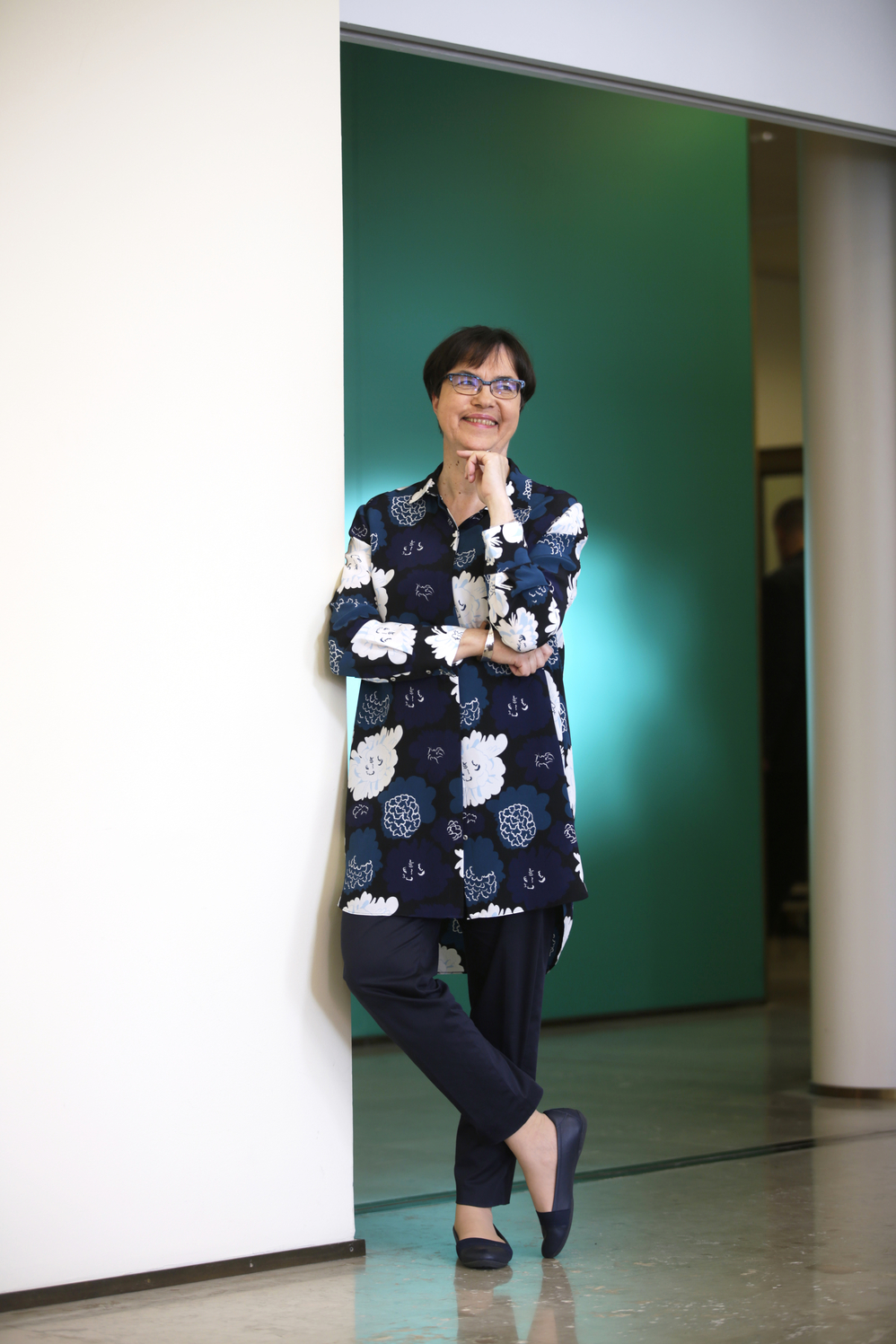 As CDO, what do you do on a day-to-day basis?

Typically, I give one or two talks per day.

In Helsinki or abroad?

In Helsinki or elsewhere in Europe. I have a lot of meetings. I try to keep them to a minimum, but there’s a lot of demand. I’m also involved in mentoring young women.

Presumably this is related to those glass ceilings you encountered early in your own career?

Yes. Five years ago, I was reading a lot because I was so frustrated with the situation. When there were ten people in a meeting, I was always the only woman. I looked around and it was especially bad in the technology industry. Along with a few friends, we established a woman in tech biannual event forum, the next one is in October where we’ve reserved the entire Finlandia hall for 1,000 women. I think it’s so important to address these issues today and to push the idea that women should not have such a struggle.

It surprises me that there should be such a pronounced gender imbalance in Finland which has a good reputation for equality.

It’s a slow process. Sadly, the situation was improving five years ago, but is now declining again. Whenever economics is hit, women are affected.

And then, of course, I try to be at my desk to deal with emails and take meetings. In the evening, I usually go to another talk. Then I end up at home and start to prepare my presentations for the next day.

What happens after the two years of your tenure as CDO?

It was always intended to be a two-year innovation project, because of the transformation of the city scale and the new strategy. The idea is to develop an understanding of the role and the concept of the Helsinki Lab and how to continue, but because the city knew everything would change, they didn’t want to anchor the CDO in the old system.

And will you continue to be involved?

It depends on the challenges one can have here. I’m of that age where I know I’m a change-leader. It depends on how many new things I can see ahead of me. I don’t want to carve on stone that this is forever for me. If I can do something useful or there are new ideas I can put into action, I’m happy to do it, but when it becomes business as usual, it becomes somebody else’s job. I think it’s very important to learn. Every day you learn something, I think that’s a good day.

10 design facts you need to know about Löyly

Now Reading A year as a Chief Design Officer
Read Next HDW HOP 2017: Parking-space sized minihouse to be built at The Three Smiths statue