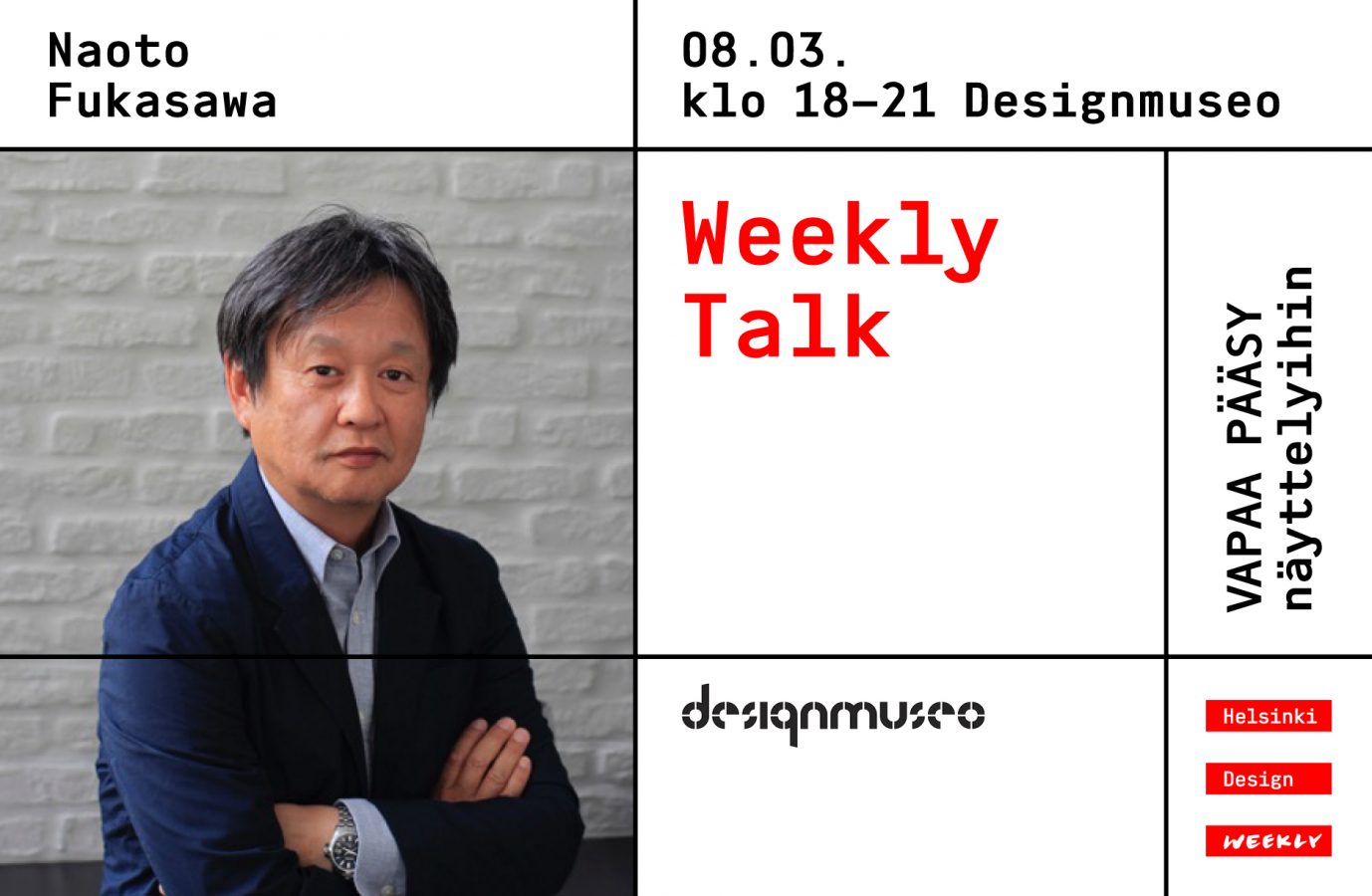 Japanese designer Naoto Fukasawa combines pleasure and severity in his product design. Fukasawa will visit the Weekly Talks series at the Design Museum on Friday, 8 March.

Fukasawa is an awarded designer, furniture-manufacturer Muji’s advisory board member and Director of Nihon Mingeikan, the Japan Folk Crafts Museum. Fukasawa (born 1956) is also known for his many design-themed publications as well as for his cooperation with Jasper Morrison. Morrison says that Fukasawa has an innate ability to come up with obvious ideas in unexpected ways and to combine pleasure with severity. He says Naoto’s works are simply better than the works of others.

Fukasawa himself has said that observing people is an important part of his work. This is indeed what makes his approach exceptionally humane. He has said to want to design the products that people are already thinking about. The appearance of his Ishikoro mobile phone is based on a pebble found on a beach. The story goes that another mobile phone model was inspired by a melted chocolate bar, as Fukasawa thought finding that shape in one’s pocket would feel natural.

His simplified, delicate idiom creates order in the user’s life and a contrast to all the chaos. To many, minimalistic products feel familiar in a way that does not evoke emotional turmoil but is likely to calm the user. The best known Naoto Fukasawa products include a wall-mounted CD player that looks like a mini fan for Muji, the Roundish wood chair for Maruni and dozens of other items from home electronics to sake glasses, public seating and suitcases.

“I design in such a way as not to pursue future trends or look for alternative opposites or extremes. I like to develop a relationship with the objects that I design, which is not influenced by fashion or seasonal change in colours.” In addition to the product itself, Fukasawa designs with attention to its operating environment. He believes that if products fit their environments, they’ll feel so appropriate and functional to people that they naturally become part of people’s lives.

Fukasawa’s long-term employer Muji (the name refers to brandless quality products) was founded in Japan in 1980. Currently Muji hosts 900 stores around the world, and one is to open soon in the Kamppi Shopping Centre in Helsinki. In the meantime, Muji and Finnish designer of automated cars, Sensible 4, are developing the world’s first self-driving robot bus. Sensible 4 has developed the self-driving steering system for the minibus. Muji has contributed to the project its expertise in design and user experience.

You can meet Naoto Fukasawa on Friday, 8 March 2019, at the Weekly Talks event at the Design Museum.

Interviewed by Weekly’s Editor-in-Chief Ida Kukkapuro and Helsinki Design Week Programme Director Anni Korkman, Fukasawa will talk about the design process of the robot bus as well as the best practices in the design museum that he is directing. We can expect an interesting discussion, lovely drinks and some new friends.

Moreover, the Design Museum allows free entrance to all of its exhibitions.

Josef Frank’s exhibition presents the production of this architect-designer born in Austria. Utopia Now – The Story of Finnish Design presents the integral role of design in the evolution of the Finnish welfare state. The Museum Gallery displays a collection of Ruudt Peters’ sculptural jewellery.

No pre-registration. The number of seats is limited.

140 years of Iittala in the Design Museum

Now Reading Welcome to Helsinki, Naoto Fukasawa
Read Next A new beginning for Röhsska – the design museum reopened in Gothenburg