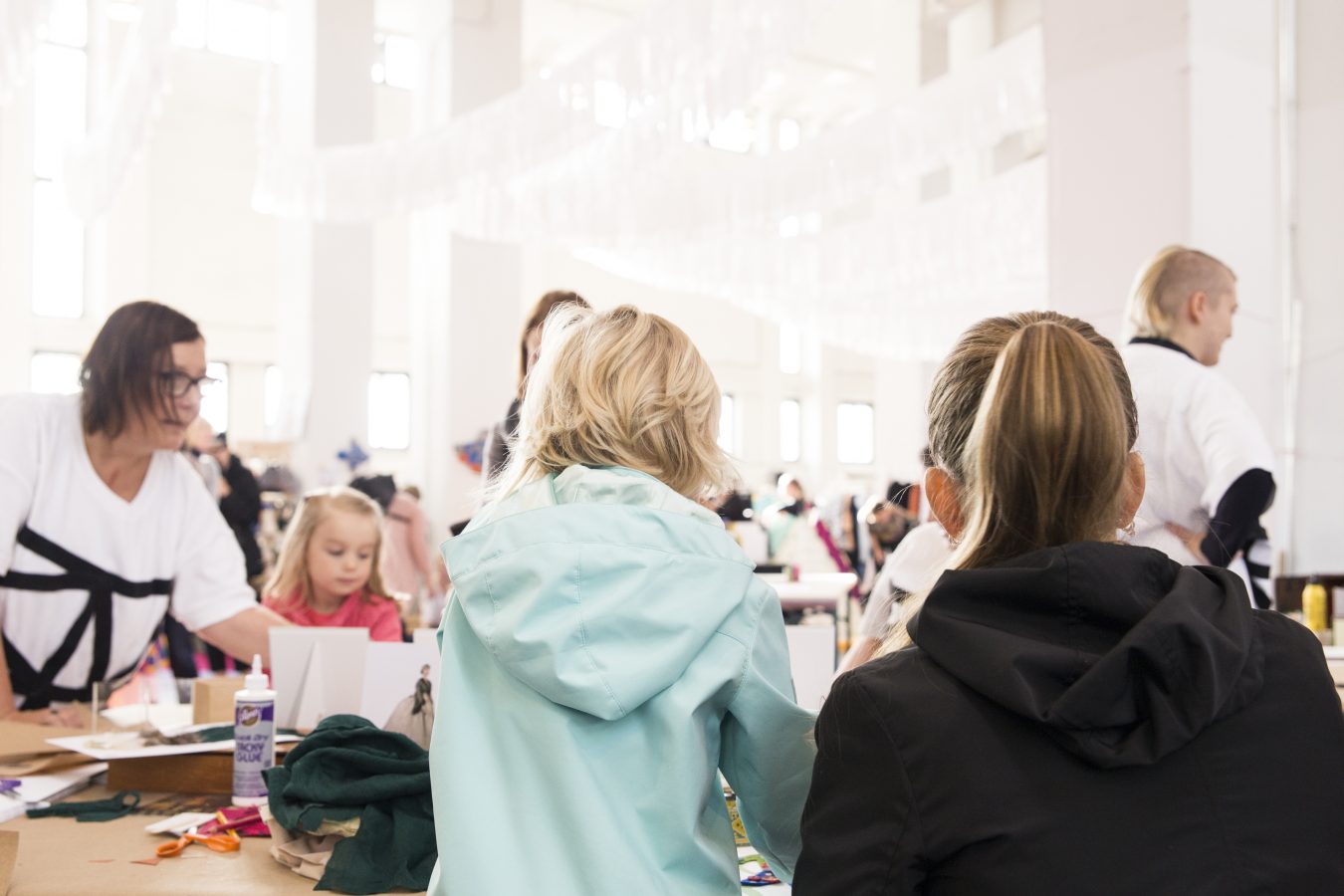 Illustrator Leena Kisonen has been working on the materials for the forest in workshops with kids in the playgrounds of Helsinki all summer. Organized for the fourth time at the old boiler hall Kattilahalli in Suvilahti, Children’s Weekend has expanded from year to year, offering activities and workshops to children of all ages. Tallink Silja’s popular cabin workshop is also present this year.

Leena Kisonen, who designed the visual appearance of Children’s Design Week, has been busy building trees and animal-themed vehicles for a Magic Forest together with children at several summer workshops. She’s an illustrator and sees that design is largely about matching, whether regarding forms, colours, ideas or materials. The funniest result may be achieved by combining items that don’t look like they belong together at all.

“For one weekend, the grey and brown forest animals can change their colours to something more fantastic,” Kisonen says, describing the Children’s Design Week theme, Magic Forest.

During the weekend, kids can ride the animal-themed vehicles designed during the summer and craft their very own animal masks. Led by Pihla Meskanen, they’ll have an opportunity to do crafts using toothpicks, candies and cardboard, or sew new pants from old shirts. Silja Line’s cabin design workshop was very popular last year, and they join Kattilahalli again this year.

– “Because the workshop was so popular last year, we are carrying it out quite similarly this year. The printed cabin materials and patterns have been updated according to Silja Line’s new visual identity, which means children will be able to build the miniature cabins even more authentically.  Furthermore, we have secured more of the craft materials which means that everyone who wants to make their own cabin will have the chance to do so”, Tallink Silja Line’s Communication Manager Marika Njöd describes.

In the workshop, kids can design furniture out of cardboard and place it on the floorplan of the cabin. While crafting and decorating, kids can meet Harry the Seal, a furry mascot familiar from Silja Line cruises. According to Njöd, children can generate ideas and dream without limitations. The crew enjoyed observing the participants in their creative process, the interior design tips and pattern choices that resulted from the workshop.

Families with children is one of Silja Line’s bigger customer groups, especially during school holidays. During the last few years the company has also invested in programme aimed at teens on the ship and Njöd shares that especially the cruises made with Youtube stars are growing in popularity. The next Tubecon-cruise will be carried out in September and more information can be found here.

There’ll be 12 workshops in total for kids during the weekend. The Little Market is again part of the event, with Finnish and international kids’ brands on sale. Raikastamo will serve food and beverages for a break between shopping and crafting.

At the sales stands this year, you’ll find various products from children’s clothing to decoration items from 26 brands. For the first time we’ll have a chance to see and buy #bebrave products, VIMMA’s new anti-bullying garments.

You can see all the vendors on the event page.

Now Reading Over 10 workshops will be held at Children’s Weekend in Kattilahalli – some of last year’s favourites also present
Read Next Young Artist of the Year 2018 J.A. Juvani’s Love & Anarchy Tips!