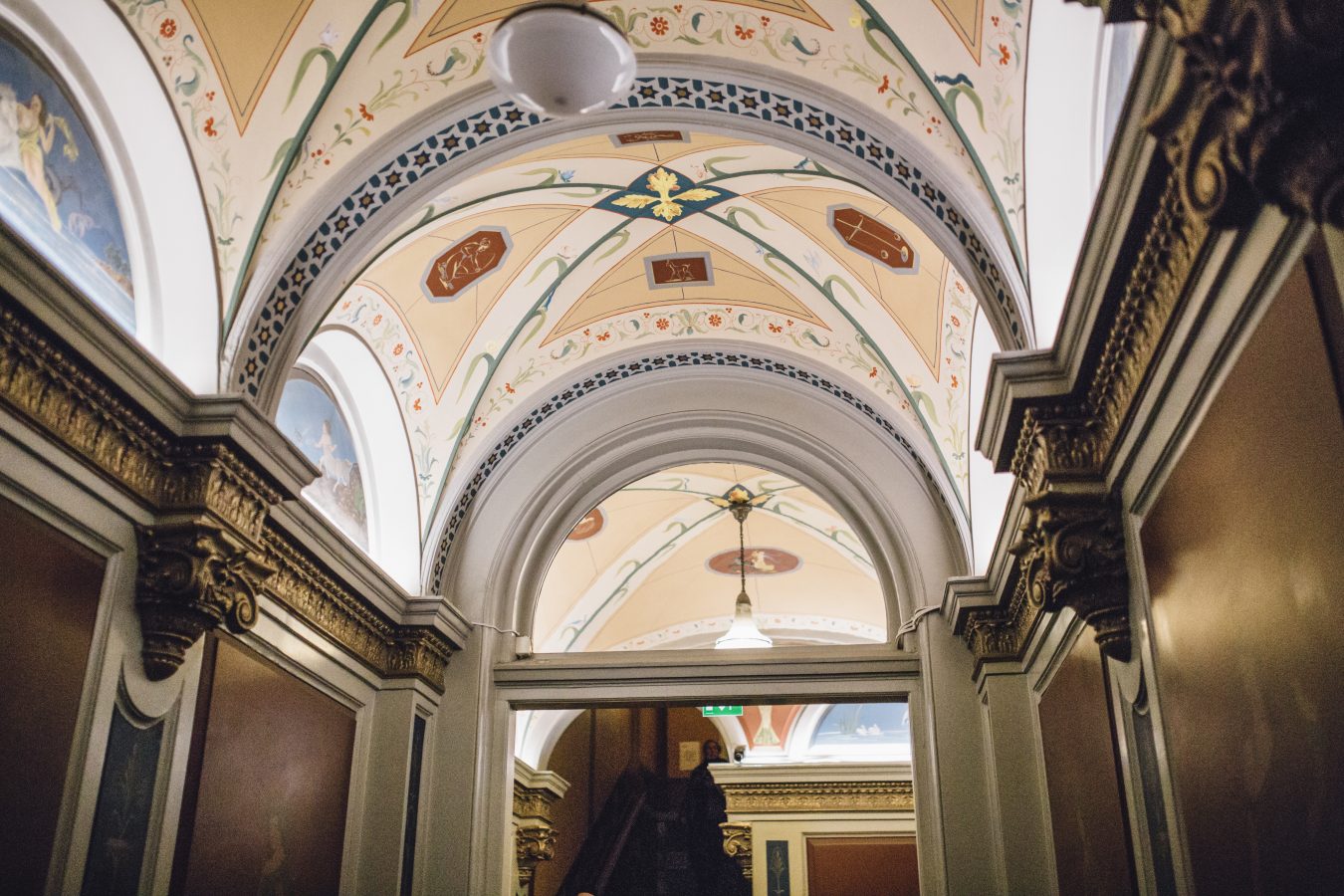 Old and esteemed properties in Helsinki feature most fascinating stairways in terms of design and architecture. In the end of the 19th century, the foyers and stairways of bourgeois houses were designed flamboyant and ornate. At the turn of the century the Art Nouveau style gained popularity and the era of abundance was over.

Many of the historically valuable properties in Helsinki had to give way to more modern and futuristic buildings during the progressive period of the 1960s and 1970s. Fortunately several impressive and culturally unique properties survived. Their stairways deserve to be called the hidden pearls of Helsinki due to inherently intriguing architectural details and designs. This autumn citizens have had an opportunity to visit the stairways of these buildings on public tours organized by Sponda. The tours will continue in 2018.

“As the population of Helsinki rapidly grew in the end of the 19th century, so did the size of the buildings, following the example of continental European development. The increasing height and framework depth of apartment houses in the inner city created an opportunity to design large, impressive foyers and stairways,” says historian and researcher Petteri Kummala. 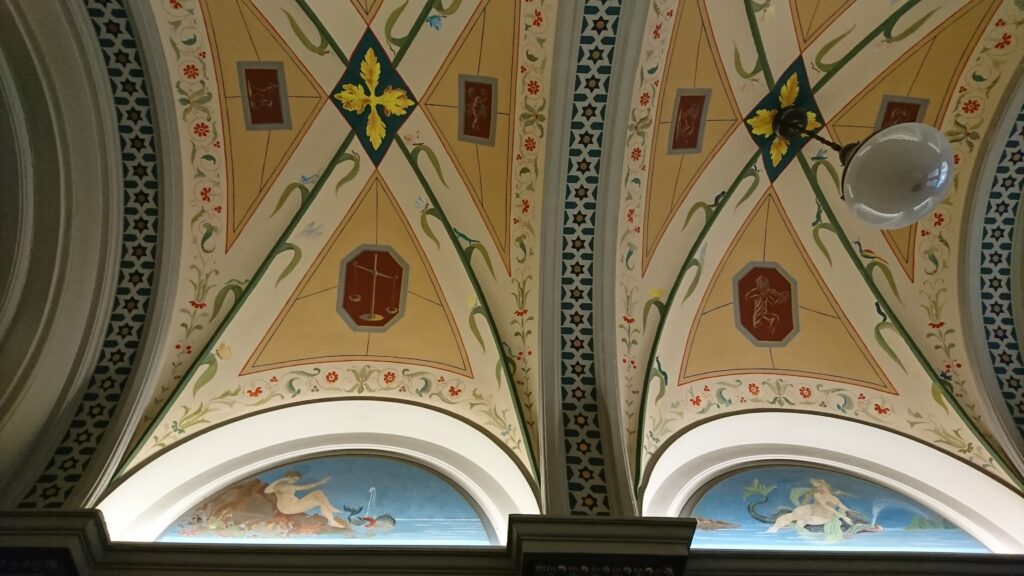 The building in Bulevardi 1 was designed by Theodor Höjer.

Increasing standards and requirements of living demanded higher quality regarding the esthetics of semipublic interiors. The foyers and stairways of bourgeois houses were designed spacious, flamboyant and ornate. Desired floridness was achieved by using gypsum ornaments, mosaic tiles on the floors, cast iron railings and in particular, decorative painting.

“The latter’s function was also to exemplify the hierarchy of different spaces inside the building. The entrance hall and bottom floors were the most important areas that deserved the most abundant decorations. Stairways were used as semipublic spaces through which to ritually enter the front room of a large bourgeois home,” Kummala explains. 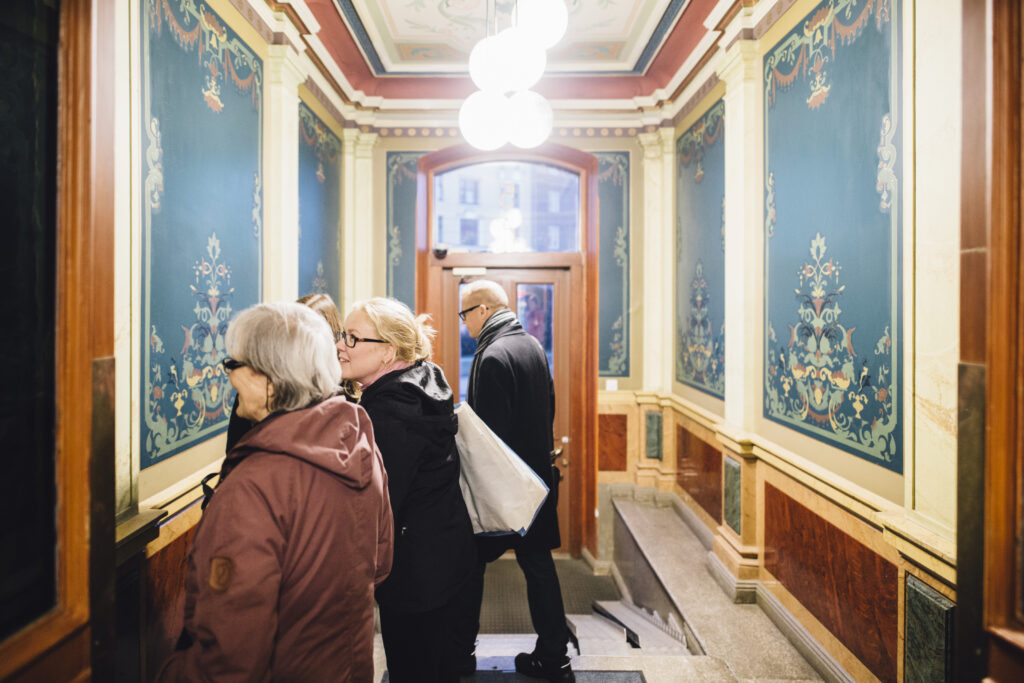 The office and retail building in Erottajankatu 5 was built in 1910. © Otavamedia 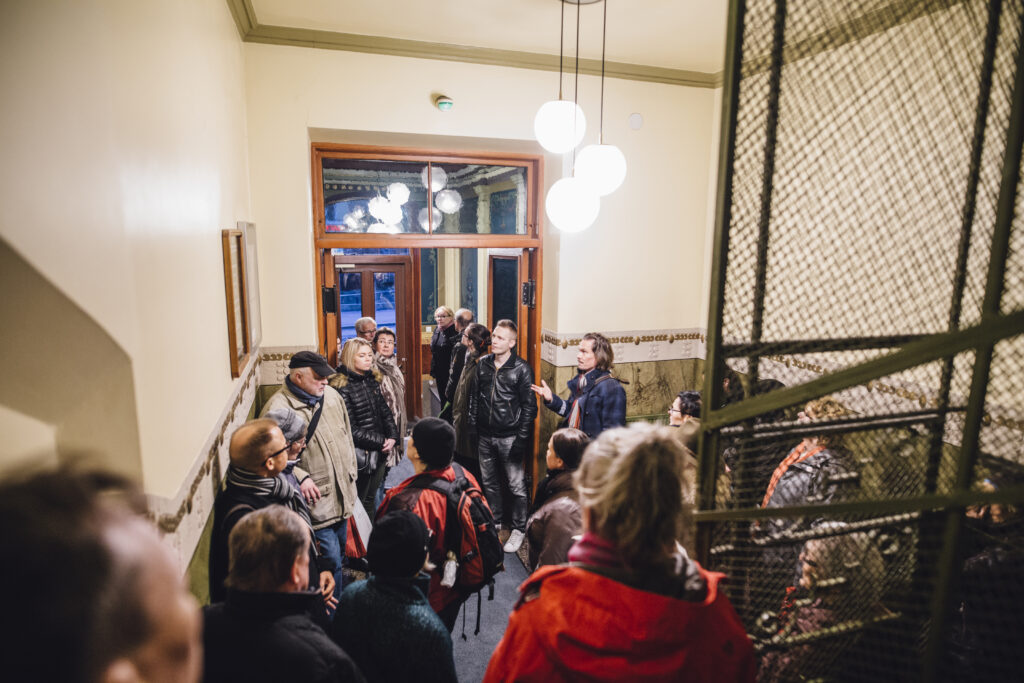 Petteri Kummala (in the middle) shows the architecture of the stairway in Erottajankatu 5 for the participants of a stairway tour. © Otavamedia

An impressive stairway symbolized high building status and the wealth of the residents.  It portrayed a combination of architectural design, high quality materials and craftsmanship. The most important decorative painting shop in Finland was Salomo Wuorio that implemented the look of many public interiors as well as stairways in Helsinki.

Their most well known works are featured in the House of the Estates, the State Archive and the Finnish Literature Society (SKS), and they naturally also decorated the most important stairways.

The golden age of stairway decoration came to an end at the turn of the century. National revival, originality and individuality surfaced. Painter Albert Edelfelt summarized his opinion to the following written statement: “I am certain that Hottentots, tattooed Papuans or man or blubber-eaters could never, not in their most inspired moments, come up with anything as hideous in colour as are some of the stairways in certain rental properties in Helsinki.”

Towards the 20th century, architects took over stairway design.

“The basis of Art Nouveau was the idea of a complete work of art, and this development suffocated decorative painters with their sample books,” Kummala says.

The jugend-styled building in Korkeavuorenkatu 35 was designed by Lars Sonck. It was built in 1907. © Otavamedia

Some of the most important and interesting stairways in Helsinki include Korkeavuorenkatu 35, Erottajankatu 5, Bulevardi 1, Mannerheimintie 16 and Aleksi-Hermes on Aleksanterinkatu. These premises have been open to the public during the tours.

“The tours are a rare opportunity to become familiar with a nearly lost world,” Kummala says.

Historian Petteri Kummala hosts The Sponda Legends tours in esteemed properties and stairways in Helsinki. The tours continue in 2018.