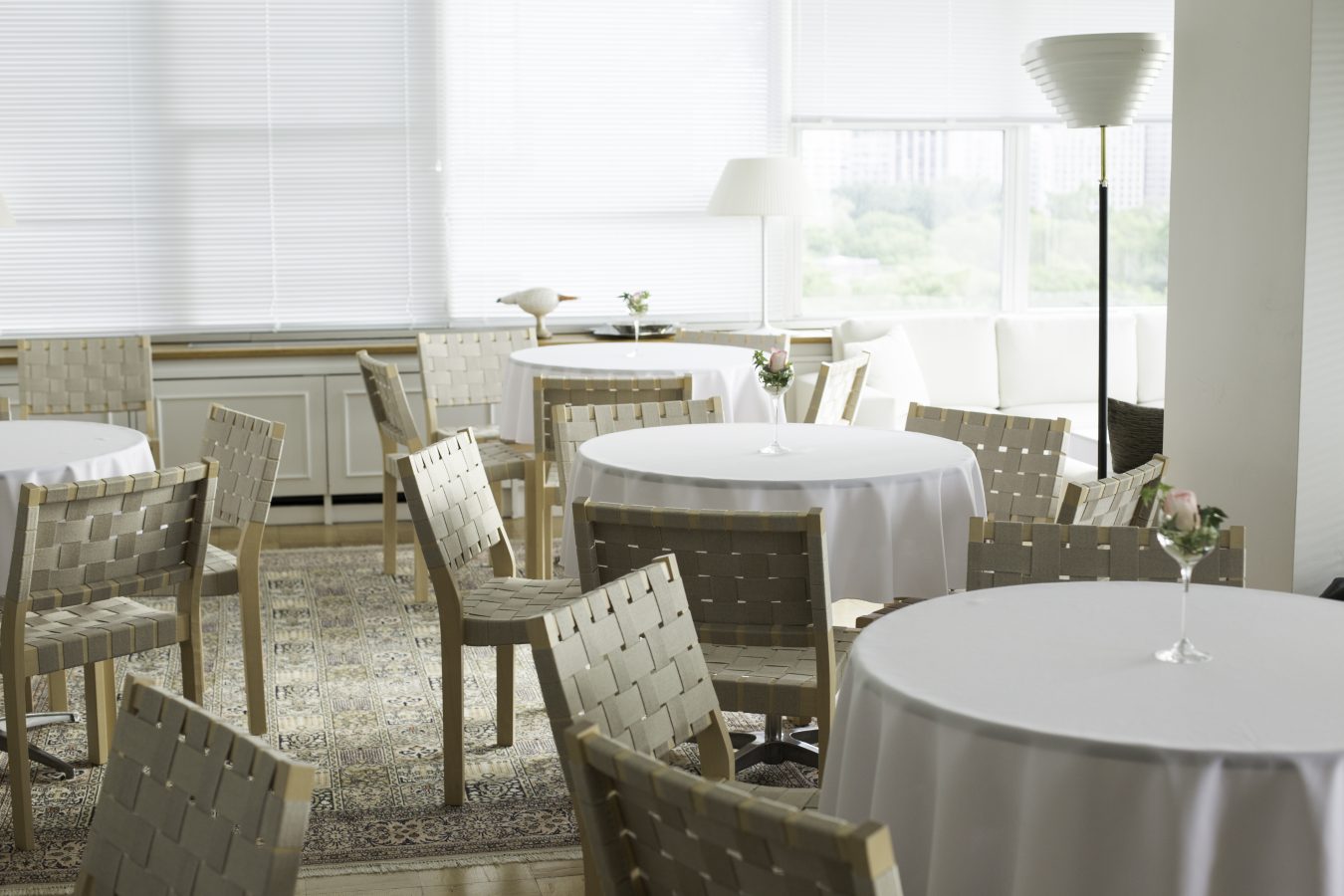 Organized during the New York Design Week in May, the Design Diplomacy discussion series opened the doors of Nordic Consul Generals’ residences on Manhattan.

Although the Finnish New York Consulate General residence is located on the Upper East Side of Manhattan in the middle of NYC buzz, it is surprisingly close to the nature. The residence is situated right by Central Park, with a gorgeous view over the lush green area from the apartment on the 11th floor. Of all the Finnish Consul Generals’ official residences, the New York residence is the smallest in floor area but one with surely the most amazing view.

The apartment has served as the residence of the Finnish Consul General since 1965. The white-brick building with 21 floors was designed by New York architect Robert L. Bien. It was completed in 1963 and became a cooperative five years later. This is when the Finnish government had an opportunity to buy the apartment it had been renting, and to this day, the residence has housed about a dozen Finnish Consul Generals.

New York’s Design Diplomacy event opened the door of the residence to the public for the first time, but it hosts dozens of invitation events every year. The premises double as a showroom for Finnish art and design. The works of Matti Kujasalo, Per Stenius and Marjatta Tapiola are on loan from the Kiasma collection.

As a space for entertaining, the residence is homely and intimate. Its lounge features a selection of Artek’s webbed chairs in light, natural colour and the A810 floor lights. Aalto’s Paimio armchair occupies the best spot before the park-view window. The focus point of the dining room is Eliel Saarinen’s impressive dining set under a set of wooden pendant lighting designed by Seppo Koho.

The dining table is designed by Eliel Saarinen.

Architect Alex Mustonen and artist Matthew Day Jackson formed the discussion duo for the Design Diplomacy evening. Mustonen is a founder and partner at Architects Snarkitekture based in New York but has some of his roots in Finland. Jackson is an American with a connection to Finland, too. His exhibition Maa just opened at Serlachius Museum Gösta in Mänttä, Finland. Jackson’s Kolho furniture series for Made by Choice was launched during the Milan Design Week. Among other topics, the Design Diplomacy discussion at the Finnish residence included the greatest challenges in Mustonen and Jackson’s careers as well as the most influential people for their careers.

The shade of blue on the walls in the Karl Johan room represents Sweden and United States.

The Swedish residence on Park Avenue

Sweden is presented in New York in one of the most prestigious milieus of the city. Its address, 600 Park Avenue, means it is located in the historical area of Upper East Side, known as the bastion of the wealthy and socially prominent citizens.

The residence building, a private palace designed by architect James Gamble Rogers in 1911, is old as far as New York architecture goes. In the 1980s, the building was listed for demolition to make space for bigger office and residential buildings. Fortunately this historical district was instead then listed for conservation, and the building could stay in its place.

The bronze ceiling is from the 1920s.

The residence at 600 Park Avenue has served the Swedish Consul Generals since 1946. Over the years, the building has lived through several changes, some of which have faded out its original style and cultural value. Therefore the residence was returned to its former glory after the property agency of the Swedish government went through with a major restoration project in 2012–2013. Now the limestone facade opening to Park Avenue looks as handsome as it did when constructed in the first place.

Inside the residence, early 20th century American architecture meets modern Swedish design. A colour scale typical for 1910 with original mahogany wall paneling and hardwood floor boards are complemented by Josef Frank’s modern chairs and side boards as well as Gunnar Cyrén’s brass lighting fixtures on the dining room walls. In the dusky library, one cannot help but first notice the sofa group designed by Frank for Svensk Tenn.

The Design Diplomacy discussions were hosted in the downstairs lounge. Two textile designers with mutual interest in natural materials and sustainable product design were invited to discuss. Born in Sweden but now a New Yorker, Anki Spets is the founder of household textile producer Area, while Shanan Campanaro has founded the American Eskayel textile studio. The two designers played the Design Diplomacy card game and discussed whether we need any new objects in the world. Both Spets and Campanaro agree on the negative. They were then asked what to change about New York. “I’d like to lose the plastic take-away packaging,” Campanaro said. Spets would pay more attention to public transport: “New York is one of the few American cities with a functional public transport system, but it still has lots of room for improvement.”

Built around the ICFF furniture fair, NYCxDESIGN is an annual design festival organized in May and spreading over all five districts of New York City. The programme includes hundreds of events from exhibitions, installations, fairs, discussion events and product launches to open doors and attracts hundreds of thousands of visitors to attend every year. The seventh NYCxDESIGN was organized from 10 to 22 May this year.

Audience at the Swedish residence.

Created by Helsinki Design Week, the Design Diplomacy event concept was implemented for the first time outside Europe in New York. The discussion series was organized in cooperation by the Norwegian, Swedish, Finnish and Danish Consulate Generals as well as the Finnish Cultural Institute in New York, inviting Nordic and New York-based designers to interact in a prestigious diplomatic context. It gave us an opportunity to take a deep look into the residences of Finland and Sweden on the Upper East Side of Manhattan.