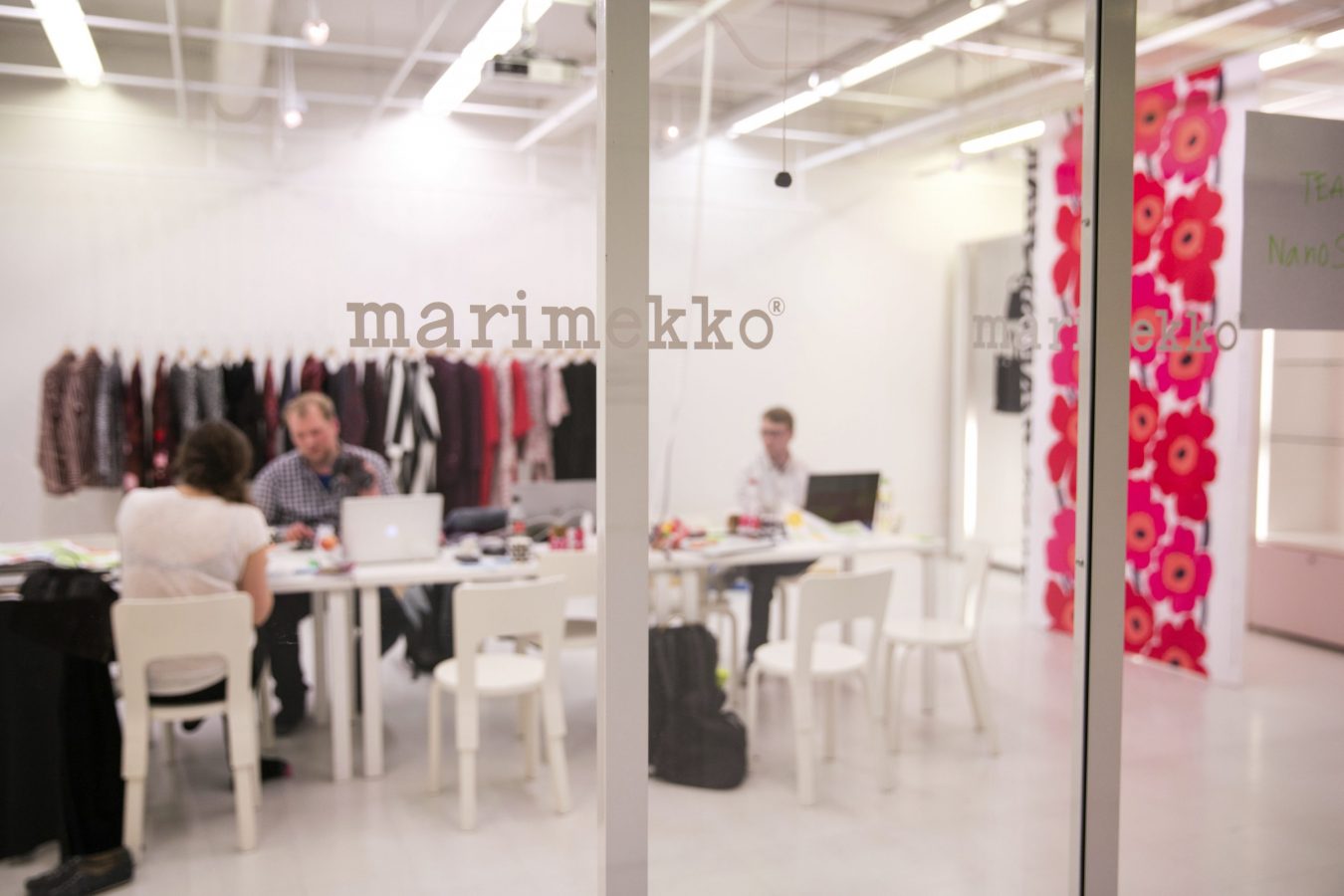 Iconic Marimekko invited a group of coders to its factory. What can modern technology do with classics of a design house?

It is 00:15 on the night between Saturday and Sunday. The factory is nearly empty but lit. Fabric printing machines have stopped rolling for the weekend, but there is something going on at the aisles. Weaving among the desks covered by cans of energy drinks, pieces of fruit and bags of crisps, one sees familiar images on the computer screens: the prints we know by the names Kaivo, Unikko and Kivet. What is going on?

Marimekko is one of the best known design companies in the Nordic countries. On this occasion, they have invited 51 coders and designers from 18 countries at the HQ in Helsinki to challenge the traditional conventions of the clothing and textile industry. Marimekko Designathon is the first coding event organized by the company.

“We have launched design competitions before, but hackathon is something new. The idea is to combine design and technology. This is where Marimekko started at, bringing people from different fields together. Marimekko is a creative community,” says Chief Marketing Officer Päivi Paltola.

Known for its patterns and colours, the design house selected the participants among hundreds of applicants, introduced them to the site and the design processes, introduced the people to each other and gave them ten popular prints to work with for 48 hours. Their task was to find new and innovative solutions for the clothing and textile industry by utilizing VR (virtual reality) or AR (augmented reality) mobile technology. The Hackathon was organized together with Junction as part of the Helsinki Design Week festival and Marimekko’s Finland100 initiative. Impressed by the factory tour

It is clear that the contestants were impressed by the factory tour at Marimekko. To a degree of highlighting the production process as a game. Team Nano Spark wanted to create a virtual factory tour. “Our idea is to explain the process as well as the stories behind the prints by using new media. We want to tell how the design is made and what was there before the print. By using a new medium, we want to make the Marimekko brand approachable to a possible new group of consumers,” says Sami-Pekka Ollila. Their demo is a mobile application that looks for “typos” on the Marimekko prints. “The game is about finding mistakes or elements that do not belong to the print in question. There are different levels according to the degree of difficulty,” Samuli Rouvinen explains.

Team Kukko (“Rooster”) wanted to plunge into the lines and patterns. “Each print can be made into a mini game that allows you to dive in and, for example, drive a car inside the pattern,” depicts Petja Kärki of Team Kukko.

The spirit of Marimekko

The participants were inspired by the company’s philosophy and the lifework of Maija Isola they found in the materials given.

“I am from India, a country with a strong tradition in textiles. Isola’s wide production and her persona convinced me. She was able to capture the spirit of the time. We want to highlight this aspect,” says Ranjit Menon of Team Aikatarha.

Marimekko is not exactly a new tech company, which was seen both a strength and a weakness. “I hope that in the demos, Marimekko finds the solutions that suit its values and philosophy. There is a risk that they get captivated by gimmick figures,” Menon ponders. The competition was an exceptional opportunity for both the contestants and the Marimekko staff. For example, people coding sound usually work alone.

“Now we are two in the same team,” Menon notes and continues: “We don’t choose to be solitude, but we’re usually the last ones to get invited to a project. It is exceptional to be part of the team right from the start.”

This was a new experience for the Marimekko staff, too.

“We’ve been going through a creative mentoring process with people from various Marimekko units to spar the contestants. It will be interesting to see what different specialists can create together. They’ve proceeded surprisingly far with the concepts in such a short time,” Paltola says.

Although the atmosphere in the Marimekko house is laid back, the contestants take their challenge rather seriously.

“We’ve changed our perspective and ideas many times after hearing that another team is doing something similar,” says Rauno Huttunen of Team Kukko.

A judge with a coding background

One of the judges in the competition is Linda Liukas, creator of the Hello Ruby programming book. Jury duty at the Designathon is a new kind of fun assignment for her.

“Enthusiastic teams gave tons of energy and ideas for myself,” she says.

“Inspired by the event, I experimented by building a small artificial intelligence. I fed 1,400 Marimekko product names to a neural net and left the machine to learn the material and come up with new names for Mari items. The fake Finnish names generated, such as Pyininpakka, Tanohalti and Ruitintullo, were really funny and represent the Karelian type of joy included Marimekko,” she discloses.

Liukas is interested in what kind of a role traditional companies assume in the increasingly technical world.

“What would have happened if Armi Ratia had been a coder? Curiousness and fearlessness are in the DNA of Marimekko, so I was not surprised to hear they invited dozens of coders over for the weekend.” The jury in action. © Janita Autio Night turns into day. The groups are to present their demos on Sunday.

“We’re quite nervous due to the time limit,” says Ollila of Team Nano Spark.

“Everyone’s been developing their own things, which we’ll soon glue into one application,” Kärki says.

“We’re trying to make the concept work in a form that will make sense to present,” Huttunen concludes.

“It’s a chaos of ideas, and you have to pick and crystallize one strong message,” says Team Kukko graphic designer Sona Brabencova, confessing she’s a huge fan of Marimekko. Brabencova entered the competition from the Czech Republic.

During the weekend, did you come up with ideas for completely new products not related to virtual or augmented reality?

“We haven’t thought about that, we’ve just been circling this bubble,” Kärki says, smiling. The Designathon jury of five selected four winning teams: Team Kuosi, Team Kukko, Team Nano Spark and Team Wi-Finally. The awarded suggestions include a virtual mirror to try on Marimekko clothing and an app to test decorative items in real interiors. The teams and their entries will be presented to the design field as well as to start-up investors at the Slush event organized in Helsinki from 30 November to 1 December 2017.